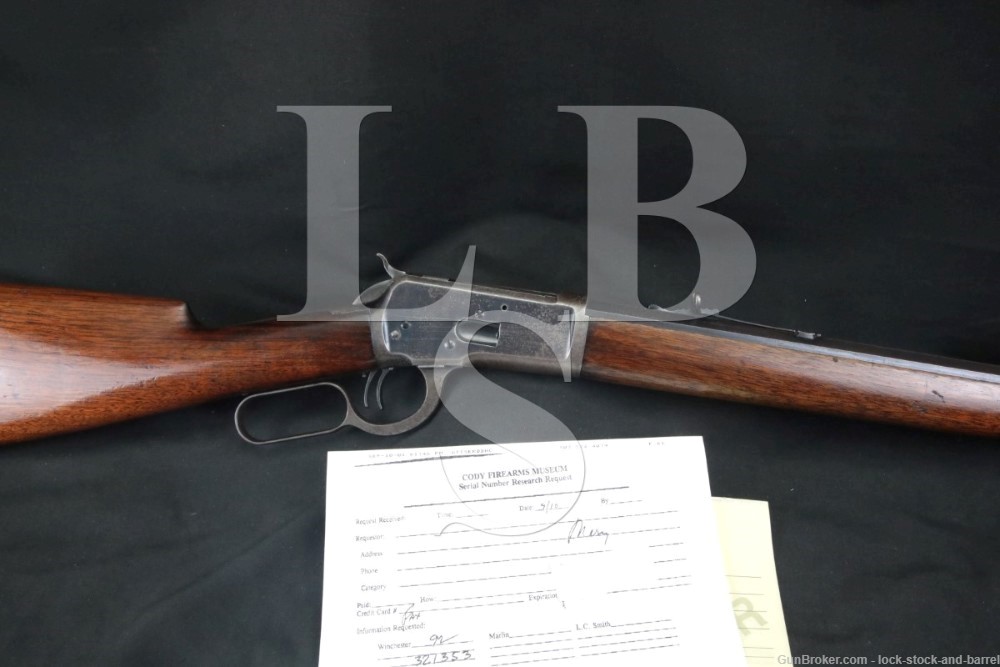 Year of Manufacture: The serial number is consistent with production in 1906. The included Serial Number Research Requests indicate shipment in October of 1911.

Sights / Optics: The front sight is a Marble beaded blade dovetailed to the front of the barrel. The blade has beads at each end, allowing it to be reversed to present either a white or a brass bead. The front sight is not original to the gun. The rear sight is a “U”-notch elevator sight dovetailed to the rear of the barrel. The notch is fine-adjustable for elevation. The top tang is drilled, tapped and filled for a peep sight (none included).

Stock Configuration & Condition: The stocks are 2-piece smooth walnut with capped forend, straight grip and checkered steel shotgun-style buttplate. The stocks have scattered light nicks, scuffs and scratches. There is thinning finish in the forend and dark discoloration toward the rear of the buttstock. There are a few more notable marks such as a pair of dings in the right-front of the forend. There is a chip-loss at the top-front corner of the wrist on the right. There are some short grain-line cracks at the rear edge of the buttstock. The LOP measures 13″ from the front of the trigger to the back of the buttplate. The plate has gone to a moderate-dark patina with some scattered light erosion and well defined checkering. Overall, the stocks are in Good-plus condition.

Bore Condition: The bore is light gray. The rifling is well defined, sharp where not interrupted by erosion. There is scattered light erosion and infrequent minor pitting in the bore.

Overall Condition: This rifle retains about 70% of its metal finish. The finish is thinning at all edges. The magazine tube has generally strong finish with slightly more wear in the barrel. Most of the finish wear is in the receiver and lever which show scattered spots of pinprick erosion and some areas gone to a light patina. The receiver has some finish remaining in the flats, around the hammer and around the lever and locking blocks on the bottom. The lever has some case color at the top-front of the trigger guard. There are some scattered light nicks, scuffs, scratches and some minor surface oxidation. The action shows operational wear. The screw heads range from sharp to lightly tool marked with strong slots, there are tool marks around a few of the screw heads. The markings are clear. Overall, this rifle is in Good-Very Good condition.

Mechanics: The action functions correctly. The hammer has a half-cock safety position. The trigger is crisp. The rear trigger can be pressed forward to set the front trigger, resulting in a very light, crisp trigger pull. We did not fire this rifle. As with all used firearms, a thorough cleaning may be necessary to meet your maintenance standards.

Box, Paperwork & Accessories: This rifle comes with a pair of Cody Firearms Museum Serial Number Research Requests which indicates that this rifle was either received in the warehouse or serial applied on 10-26-1911 (based on the serial range, we suspect this is when it was received in the warehouse) as a .38 caliber rifle with a 26″ Octagonal barrel, shotgun butt and set-trigger, shipped 10-27-1911 on order number 337470. The Research Requests also indicate that the rifle was originally supplied with a Lyman front sight, not the current Marble front sight.

Our Assessment: This is a Winchester Model 1892 Rifle with some very interesting features. The serial number would indicate that the serial was applied to the receiver in 1906, but the information included on the Cody Firearms Museum Research Requests indicates that the rifle didn’t ship until October of 1911. This is not unheard of from Winchester and makes a little more sense given the rifle’s special order features. The rifle is chambered in .38-40 Winchester and has a 26″ octagonal barrel. Special features include a double set-trigger and a shotgun-style buttplate. The rifle was originally supplied with a Lyman front sight, but now sports an interesting Marble sight which has both a white and a brass bead. The rifle shows honest wear consistent with its age, it retains a pretty good bore and strong mechanics. The .38-40 Winchester cartridge was based on the popular .44-40 but necked down to about .40 caliber, giving it a little bit higher velocity. It was once a popular round for hunting small-medium game as well as for defense. This rifle should be of interest to the Winchester collectors, especially with its features. It also has a quite shootable bore and may still prove to be a good companion in the field or on the range. Please see our photos and good luck!