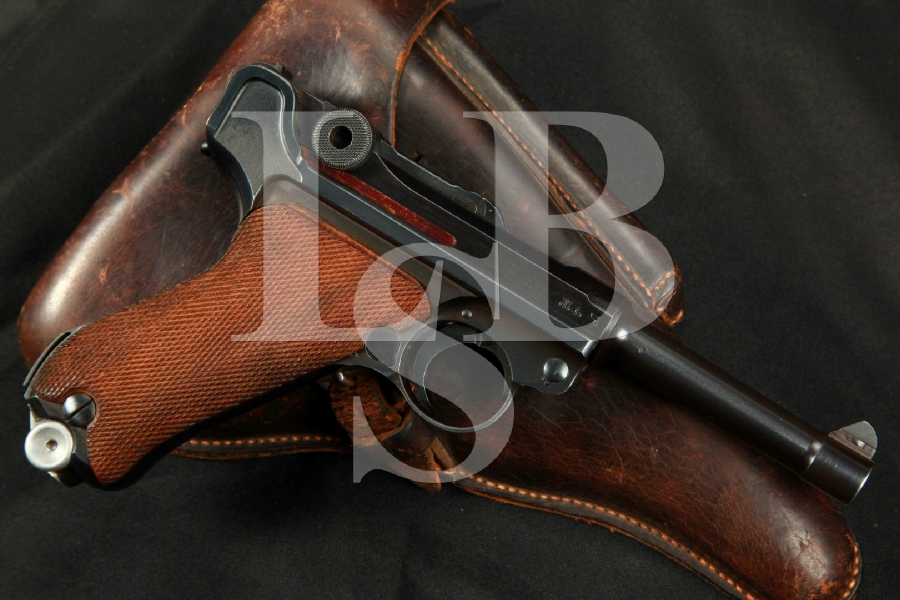 Sights / Optics: This pistol is mounted with a “V” notch on the top of the rear toggle and a serrated ramp front sight dovetailed into the band at the front of the barrel.

Stock Configuration & Condition: The grips are checkered walnut. The checkering shows very light wear that is still sharp to the touch. There is a spot of marring on the left grip near the front edge below the safety and a strip of marring running down the lower half of the grip. The left grip is noticeably lighter at the top than on the rest of the grip, as though most of the grip was exposed to water or oil while the top was protected. The grips rate in about Fine overall condition.

Type of Finish: The entire pistol is blued except for the sear bar safety, which is “in The White”, and the ejector, which has a plum colored finish.

Bore Condition: The bore is bright and the rifling is sharp and pronounced. The bore shows very light erosion sprinkled over its length.

Overall Condition: This pistol retains about 96% of its current metal finish. There are two tiny nicks in the front left edge of the frame below the takedown lever, light tiny tool marks on the right side of the takedown lever and the frame next to it, and thinning on the front edges of the frame and the edges of the sideplate. The toggle serrations are sharp but the checkering shows light wear. The magazine release checkering and the safety serrations show light wear and the takedown checkering is sharp. The grip screws are sharp. The markings are clear and sharp except for the markings on the right side of the receiver, which are faint. Overall, this pistol rates in about Excellent condition.

Box, Paperwork & Accessories: This pistol comes with one blued magazine with an aluminum bottom piece, a period correct dark brown (mahogany colored?) leather holster and a tool. The magazine in the pistol is a “1939” type made from extruded tubing. The left side of the body is marked “fxo”, with “Eagle / 37” marks in two places and with P.08”. The “fxo” and the Waffenamts refer to Haenel of Suhl, who produced magazines for Lugers from 1939 to 1942. The bottom piece is marked “8455 / s”. The body shows minimal wear and the bottom piece has a small nick on its bottom surface and a few tiny marks on the right edge. The magazine is in about Excellent condition. The holster has a stiff leather top flap sewn to the back side of the holster, which becomes its hinge. The flap has a short leather strap sewn to it, which is secured by a buckle sewn to the outside surface of the holster at its rear edge. There is a magazine pouch sewn to the front surface of the holster and a tool pouch sewn to the inside surface of the top flap. The inside of the holster is lined on its back surface with smooth finished leather. The outside of the holster is also slotted for a pull strap, which is present and intact. The back side of the holster is marked “G. J. Ensink & Co. / OHRDRUF / 1939” and with an “Eagle / WaA163”, the correct Waffenamt for Ensink. The leather of the flap hinge has no cracks and all the stitching on the holster is intact. The holster shows several scuff marks, light handling marks, and thinning of the finish on the top flap. The holster is in about Very Good condition. The tool has a matte phosphate finish and is spotted with light erosion. It is in about Good condition.

Our Assessment: The Luger (Pistole Parabellum or P-08) is perhaps the most aesthetically and ergonomically pleasing of all autoloading centerfire pistols. It is also one of the strongest, most accurate and most recognizable service pistols ever made. Georg Luger developed his famous pistol in 1898-1899 (starting with the Borchardt/Luger transitional pistol). The Luger is, essentially, a much-improved Borchardt type pistol, which was itself based on the toggle action concept used by Sir Hiram Maxim in the world’s first practical machine gun. The Maxim shot its way to bloody fame in World War 1, which also became the combat proving ground for the Luger Pistol. Even though the Luger had been technically replaced as the main service sidearm by the P38, they were still manufactured by the Germans up to and including 1942 and continued to be used in the services throughout WWII. This Mauser built 1934 byf Luger is in Excellent condition with about 96% of its original finish remaining. All of the serial numbers on the pistol match, including those on the Haenel magazine and the walnut grips, and all of the proof marks are correct for this model. It comes with a Waffenamt stamped Luger holster made by Ensink in 1939 and a service tool. The metal shows thinning on the sideplate and the front edges of the frame and a few tiny marks. The checkered grips show very light wear and are still sharp to the touch but there are a few mars on the left grip and it is discolored from exposure to water or oil. The bore is bright with sharp pronounced rifling, but there is very light erosion sprinkled throughout the length of the bore. This is an outstanding package for the high-end collector – we see quite a few Lugers, and many have matching numbers or come with a holster, but it isn’t very often that you find one in this nice of a condition with a matching magazine AND all the other features.