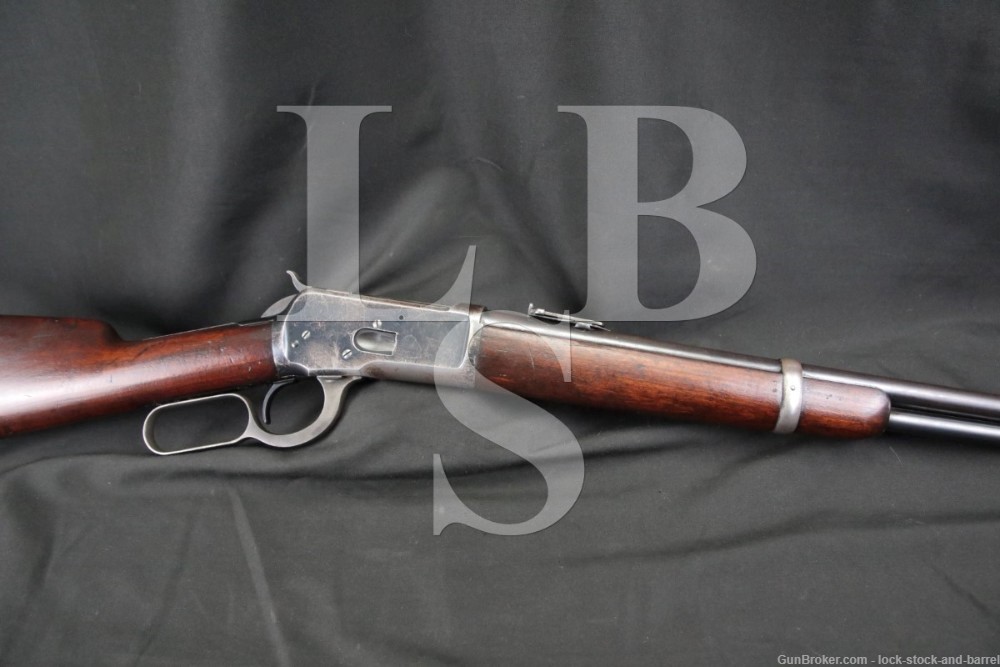 Markings: The left of the barrel is marked “MANUFACTURED BY THE WINCHESTER REPEATING ARMS CO. / NEW HAVEN, CONN. U.S.A. PATENTED OCTOBER 14.1884.” in front of the rear sight and “32 W.C.F.” behind. The top of the barrel and receiver each have an ovalled “WP” proof. The underside of the receiver is marked with the serial number at the front. The upper tang is marked “MODEL 1892 / -WINCHESTER- / TRADE MARK REG. IN U.S. PAT. OFF.”.

Sights / Optics: The front sight is a blade pinned to a slotted base fixed to the front of the barrel, the rear sight is a folding ladder sight presenting a “V”-notch when folded down and has a “V”-notch on the crosspiece of the ladder which is marked from 0 to 20, dovetailed to the rear of the barrel. The top tang is drilled, tapped and filled for a peep sight (none included).

Stock Configuration & Condition: The stocks are two-piece smooth walnut with banded forend, straight grip and carbine-style steel buttplate. The stocks have some scattered nicks, scuffs and scratches. There are a few more notable dings, most notable are three in the left of the buttstock behind the wrist. There is minor loss at the toe. There is some dark discoloration, mostly where the wood meets metal. There are no cracks. The LOP measures 12 3/4″ from the front of the trigger to the back of the buttplate. The plate has some finish in the tang and a little in the face, the heel and toe are mostly worn to white, with scattered nicks, scratches and some minor oxidation. Overall, the stocks are in about Very Good condition.

Overall Condition: This rifle retains about 55% of its metal finish. The finish is thinning at all edges. The top of the barrel shows wear going to a light patina with stronger finish on the bottom. The magazine has generally strong finish. The receiver has wear on the bottom, otherwise showing scattered wear mixed with fairly strong finish. The top tang has a defined outline of wear from a previously installed tang sight. There are several scattered light nicks, scuffs and scratches. The action shows operational wear. The screw heads range from sharp to tool marked with strong slots. The markings are clear. Overall, this rifle is in Good-Very Good condition.

Mechanics: The action functions correctly. We have not fired this rifle. As with all previously owned firearms, a thorough cleaning may be necessary to meet your maintenance standards.
Box, Paperwork & Accessories: This rifle comes with a Cody Firearms Museum Show Search Form which confirms that this rifle’s serial number was applied November 10, 1911, but there was no other information available for this serial number.

Our Assessment: The 1892 followed the 1886 and is basically its little brother, the same mechanical design made smaller for pistol calibers. When asked by Winchester to design an improved pistol caliber lever action, John Browning said he would have the prototype completed in under a month or it would be free. Within 2 weeks, Browning had a functioning prototype of the 92. Calibers for the rifle vary and some are custom-chambered. The original rounds were the .32-20, such as this example, .38-40, and .44-40 Winchester centerfire rounds, followed in 1895 by the new .25-20. This rifle is a saddle ring carbine chambered for .32-20. It retains about 55% of its metal finish with a decent bore and strong mechanics. Given its age, this rifle is in good shape and should make nice addition to a Winchester collection missing an 1892 SRC. It could also still prove to be a fun shooter. Please see our pictures and good luck.