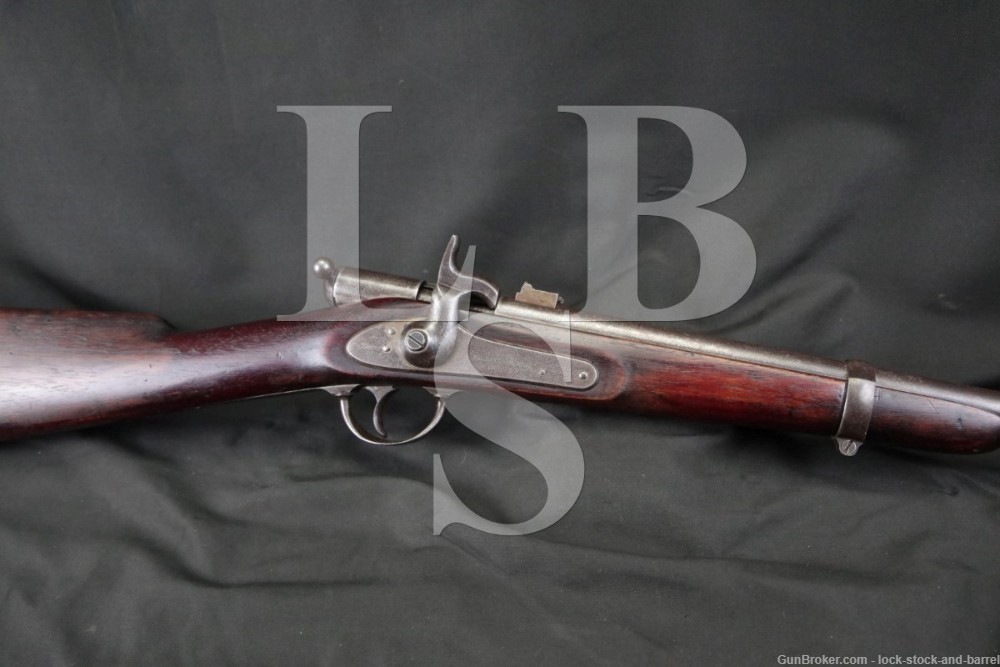 Year of Manufacture: Circa 1865

Sights/ Optics: The front sight is a balde. The rear sight is a two position “U” notch. It presents a “U” in the down position. When raised the notch has an integral “U” marked “6” at the top and narrow aperture marked “3” underneath.

Stock Configuration & Condition/ Grip: The stock is one-piece wood featuring a barrel band at the front of the forend, a lock-plate secured by two screws, a small sling bar with a saddle ring, a straight wrist, a straight comb and semi-crescent butt-plate. The stock has some light-moderate handling marks, nicks and scuffs. Notably, there is a light crack on the left side of the toe. The LOP is 14.5” from the trigger to the rear of the butt-plate. The butt-plate is coated in light surface oxidation. Overall, the stock is in Very Good plus condition for an Antique.

Bore Condition: The bore is semi-bright with mostly sharp rifling. There is scattered light erosion concentrated around the muzzle and in the grooves.

Overall Condition: The carbine has no surviving metal finish. The gun is coated in moderate oxidation and has taken a patina color. Notably, the lock-plate and trigger guard are coated in light pitting in addition to some scattered patches of light pitting on the barrel. Some markings are obscured with the clear ones described above. The screwheads are only lightly tooled and remain serviceable. Overall, the carbine is in Good condition.

Our Assessment: The Palmer Carbine was an early bolt-action design which was patented by E.G. Lamson & Company of Vermont. It has the distinction of being the first American made bolt-action design configured to fire metallic cartridges that was adopted for military service, albeit on a limited basis. An order was placed for a small number of Palmer Carbines late in the Civil War, but they arrived too late to see any action. It is estimated that only 1,001 specimens were ever produced during the gun’s production run.

This particular specimen has light-moderate oxidation on its metal surfaces, but it remains mechanically sound. The gun’s markings are obscured by pitting, but this Palmer Carbine retains its distinct aesthetic. This is a great option for historical firearms collectors. Good luck on your bid!