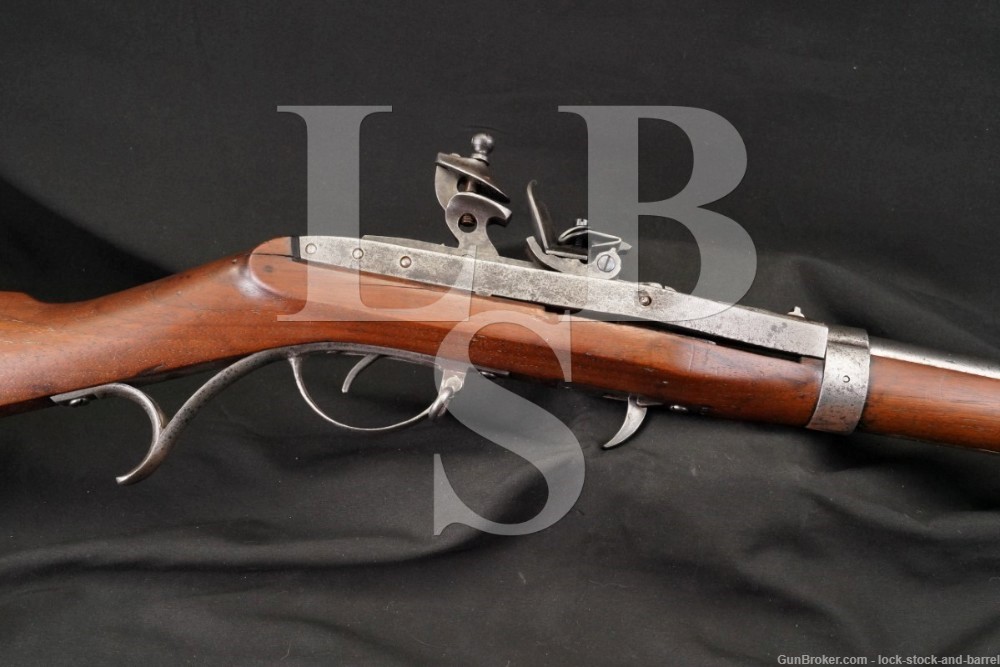 Sights/ Optics: The front sight/bayonet lug is fixed by the muzzle. The rear sight is a dovetailed “V”-notch.

Stock Configuration & Condition/ Grip: The stock is one-piece wood featuring a forend cap secured by a pin, a slot in the forend for the included ramrod, two barrel bands secured by pins (the forward barrel band has a fixed sling swivel), a sling swivel fixed to the front of the trigger guard, a straight wrist with finger grooves integral to the bottom tang, a straight comb and a metal butt-plate. The stock has some light-moderate handling marks, nicks and scuffs. Notably, there is a light chip on the left side of the forend where the stock meets the receiver, situated by the hammer. Also, there is a moderate ding on the belly situated near the toe, a patch of light-moderate nicks on the right side of the butt, a light crack on the right side of the wrist situated directly behind the action and another light  crack situated slightly ahead if the aforementioned which originates between the hammer and frizzen. The LOP is 14.75” from the trigger to the rear of the butt-plate. The butt-plate has scattered spots of discoloration and light pitting from oxidation. Overall, the stock is in Very Good condition for an Antique.

Bore Condition: The bore is grey with somewhat sharp rifling. There is scattered light-moderate erosion concentrated in the grooves.

Overall Condition: The rifle’s metal finish has worn off and it is now in the white. The gun’s metal surfaces are coated in scattered patches of light pitting and surface oxidation, but the gun remains mostly bright. There are some light handling marks, nicks and scuffs in the gun. Notably, there is some light pitting around the muzzle, the breech has taken a patina color from oxidation exposure and the pitting on the gun is concentrated on the receiver. The marking remains clear. The screwheads are lightly tooled and remain serviceable. Overall, the rifle is in Very Good condition for an Antique.

Mechanics: There are aftermarket screws and an aftermarket part attached to the frizzen, but they work correctly. The breech can still be raised but it takes a bit of force, we recommend exercising some caution to avoid damaging the stock when manipulating the breech. Otherwise, the action functions correctly including the half-cock safety. We have not fired this rifle. As with all used firearms, a thorough cleaning may be necessary to meet your maintenance requirements.

Our Assessment: John H. Hall (ca. 1781-1841) was a inventor and gunsmith from New England. He patented a unique breech-loaded rifle design in 1811, the design earned him a contract from the U.S. War Department in 1819 to produce 1,000 rifles based on the patent. Hall moved to Harpers Ferry to oversee the production of these new guns, among the most interesting accomplishments of the skilled inventor was the construction of workshops with machinery that were designed to produce interchangeable parts for his new guns. Hall noted in a letter to the Secretary of War in late December of 1822, “I have succeeded in establishing methods for fabricating arms exactly alike, & with economy, by the hands of common workmen, & in such manner as to ensure a perfect observance of any established model, & to furnish in the arms themselves a complete test of their conformity to it.” Indeed, Hall devoted much of his attention applying the theory of interchangeability to production and is credited with playing an important role in paving the way for America’s industrial revolution for his methods would be implemented in America’s early factories.

This is a Hall Model 1819 which was a flintlock-ignition breech-loaded rifle, there would later be a percussion-ignition variant of the rifle which was also made at Harpers Ferry. Per the variations listed by Flayderman’s reference, this specimen would fall into the Second Production variation. The gun, while innovative, was not necessarily the most practical, despite this the design certainly helped pave the way for America’s later adoption of breech-loaders after the Civil War. To load the breech, you have to push the breech upwards with a lever situated ahead of the trigger. On this specimen the breech is a bit stubborn, but it still can be pushed up. Otherwise, the action still engages normally on this Hall Rifle. This is a well preserved, and relatively uncommon, American martial arm from the early 19th century which played an important role in the growth of this great country. Good luck on your bid!