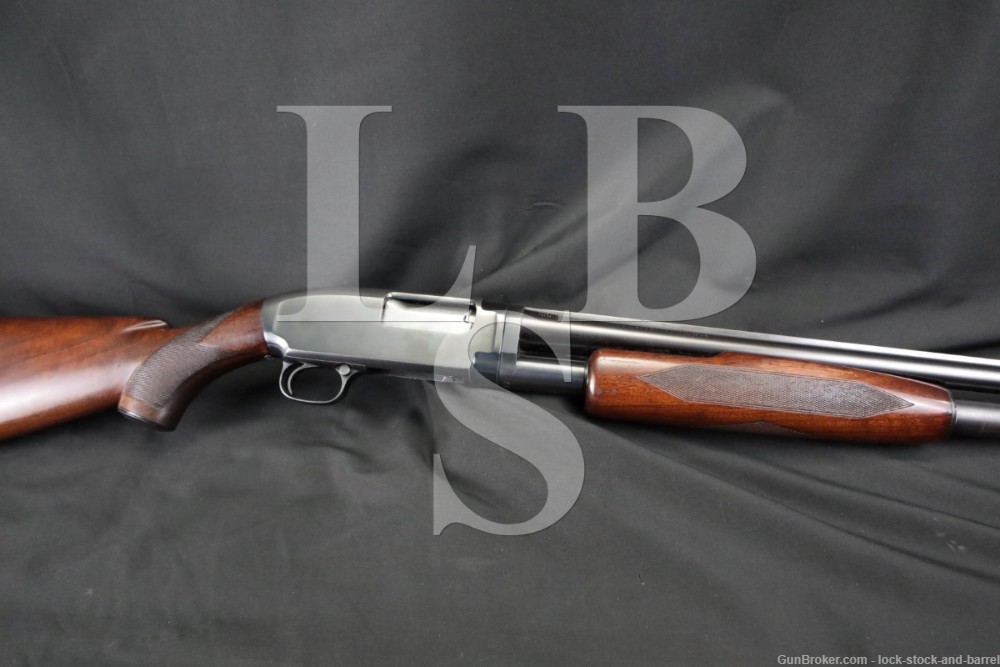 Choke: The Skeet choke is fixed

Markings: The left side of the barrel is marked “ WINCHESTER PROOF STEEL”, “MADE IN U.S.A. / -WINCHESTER- / TRADEMARK”, “-MODEL 12-”, “-28 GA.-”, “2 7/8” CHAM.” and “SKEET”. The bottom of the magazine and receiver are serial matched “749884” and the bottom of the receiver is marked Skeet. The right side of the barrel has a patent mark. The butt-plate has a faded “WHITE LINE” mark. The top of the receiver and barrel have the Winchester proof mark.

Barrel Length: 26” with an attached Lyman made “CUTTS” compensator screwed to the barrel. Due to a choke designation being placed on the barrel it should be assumed the compensator is an aftermarket attachment.

Sights/ Optics: There is a metal bead fixed to the front of the compensator and one on the rib.

Stock Configuration & Condition/ Grip: The stock is two-piece wood featuring a checkered forend, a checkered semi-pistol grip with a Winchester marked black synthetic cap, a fluted straight comb and black rubber butt-pad. The stock has only a few scattered light handling marks, nicks and scuffs. The checkering remains sharp. There are no chips or cracks. The LOP is approximately 15”.  Overall, the stock is in Very Good condition.

Bore Condition: The bore is mostly bright but there is scattered stubborn fouling and light erosion concentrated in the compensator

Overall Condition: The shotgun retains about 90% of its metal finish. The gun has routine handling marks, some nicks and scuffs. Notably, there are some routine handling marks on the magazine and light finish loss along the leading edges. The markings remain clear. The screwheads are only lightly tooled and remain serviceable. Overall, the shotgun is in Very Good condition.

Mechanics: The action functions correctly. This shotgun can be slam-fired which is done by holding the trigger and pumping forend to fire the gun, this is how the gun was designed.We have not fired this shotgun. As with all used firearms, a thorough cleaning may be necessary to meet your maintenance requirements.

Box Paperwork and Accessories: There is an attached compensator described above.

Our Assessment: The Winchester Model 1912 was an improved version of John Moses Browning’s groundbreaking design, the Model 1897 pump action shotgun. While similar in most aspects to Browning’s design, several improvements were made by Winchester engineer Thomas Crossley Johnson. Johnson’s most notable improvement was to alter the action. While Browning had designed his m/1897 with an external hammer, Jonson modified the design with an internal hammer. The Model 1912 retained the distinct slam-fire action used on Browning’s original design.

This is a Model 1912 Skeet which was made in 1937. It has been customized with an aftermarket Lyman made “CUTTS” compensator and a White Line butt-pad. The gun has some light handling wear, but it remains both a mechanically sound and aesthetically pleasing option. Good luck on your bid!