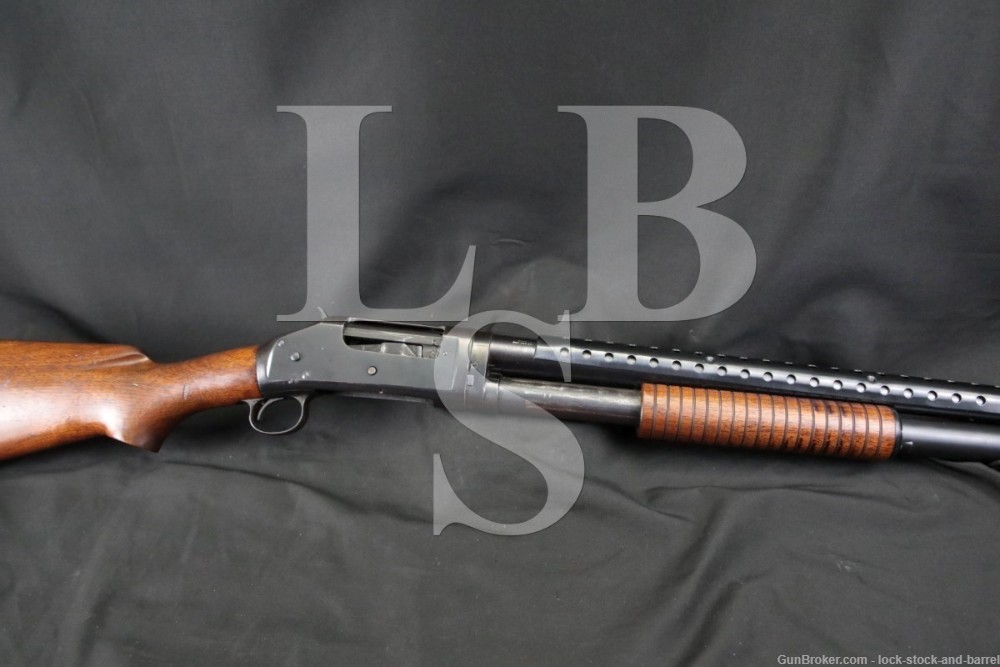 Choke: The Cylinder bore is fixed

Sights/ Optics: There was a bead fixed to the front of the barrel but it has been ground down. This indicates that the barrel was for a riot gun and NOT a trench variant of the Model 1897 shotgun. The Trench gun’s bayonet lug and heat shield assembly has a fixed metallic bead.

Stock Configuration & Condition/ Grip: The stocks are two-piece wood featuring a corn-cob style forend, a semi-pistol grip, a “low” fluted straight comb and Winchester marked butt-plate. The bayonet lug and belly have sling swivels. The sling swivel on the butt was used almost exclusively on trench variants and not riot guns, further indicating the barrel is a replacement. The stock has some scattered light handling marks, nicks and scuffs. Notably, there is a patch of light wear on the rear left portion of the forend, there are some scattered light nicks on the grip, a few scattered patches of light finish loss on the butt and some light compressions on the belly. There are no chips or cracks. The LOP is 14” from the trigger to the rear of the butt-plate. The butt-plate has some light handling wear. Overall, the stock is in Very Good condition.

Type of Finish: Blue with a Parkerized Bayonet Lug

Bore Condition: The bore is mostly bright with some light erosion concentrated around the muzzle.

Overall Condition: The shotgun retains about 70% of its metal finish. There are some light handling marks, nicks and scuffs on the gun’s metal surfaces. Notably, there is finish loss around the muzzle which is now coated in light surface oxidation, light wear along the leading edges, routine wear on the magazine and the gun has patches of light surface oxidation scattered throughout. The markings under the heatshield are obscured, otherwise they are clear. The screwheads are lightly tooled and remain serviceable. Overall, the shotgun is in Very Good condition.

Mechanics: The action functions correctly. This shotgun can be slam-fired which is done by holding the trigger and pumping forend to fire the gun, this is how the gun was designed.We have not fired this shotgun. As with all used firearms, a thorough cleaning may be necessary to meet your maintenance requirements.

Our Assessment: The Winchester Model 1897 was designed by the legendary gunsmith John Moses Browning. Browning improved upon his earlier Model 1893 with a stronger receiver that could sustain the pressure of smokeless powder shells. The gun is a “takedown design” meaning the barrel and magazine can be easily separated from the frame in order to make storage and transportation easier. Also, Browning designed the shotgun so that it can be “slam fired”, where the user keeps the trigger depressed and fires shells by cycling the forend. The gun has a large production run, from 1897-1957, and is still considered one of the most brilliant shotguns ever made.

The Winchester Model 1897 did not just make an impact on the commercial market, the U.S. Government also took an interest in the innovative firearm. During WWI a militarized variant of the shotgun was accepted for service, remembered as the “Trench grade” variant, it has an attachment fixed to the barrel which features a bayonet lug and heatshield. The trench gun’s lacked notches on their barrels which allowed for the installation of an attachment which secured the magazine to the barrel, instead the bayonet lug secured the magazine on trench guns. Furthermore, authentic trench gun barrels were made without beads as the bayonet-lug/heat shield had a bead fixed to it. There was also a “riot grade” version of the shotgun which lacked the bayonet lug and heat shield attachment, in addition to a few other minor differences.

These guns were put to deadly use during WWI, their effectiveness prompted the German High Command to protest the use of shotguns in combat, the Germans claimed it was a violation of the 1907 Hague Convention on Land Warfare. The protest was likely prompted by the weapons effectiveness, rather than any actual moral scruples and was disregarded by the U.S. Government (this was the same German High Command who used poison gas in battle after all). Both the “riot” and “trench” grade shotguns continued to see use during the Interwar period and when WWII broke out the U.S. Government once again called upon Winchester to mass produce both riot and trench variations of Model 1897 for military service. They were used extensively in the Pacific Theater against the Japanese where hand to hand combat was all too common and to a lesser extent in Europe. Although its age was starting to show after WWII, the Model 1897 would see limited combat in both Korea and Vietnam. It was an expertly made and stalwart shotgun that served the needs of American servicemen well.

This particular specimen is a custom assembled “trench” variant with parts made during WWII. The gun has several irregularities which should be kept in mind. The barrel had a bead front sight which was ground down and notches for an attachment to secure the magazine to it, this indicates the barrel was made for a “riot” variant rather than a “trench” one. Despite this, the belly has a sling swivel attachment which was almost exclusively seen on Trench guns (the few recorded riot guns with belly mounted swivels had features this gun lacks). The receiver and its extension are matching and the stock markings are appropriate (it is marked with an inspector marking from then Colonel Guy H. Drewry, he would later achieve the rank of Brigadier General, which would be appropriate for a gun in its serial range). Although not a “trench” variant barrel, it is also appropriately marked, albeit not original to the shotgun. Based on the evidence before us, we have concluded this gun had its barrel replaced and a bayonet lug/heat shield installed onto it which also is not original. The gun still works appropriately and should make a fun addition to any collection. Good luck on your bid!