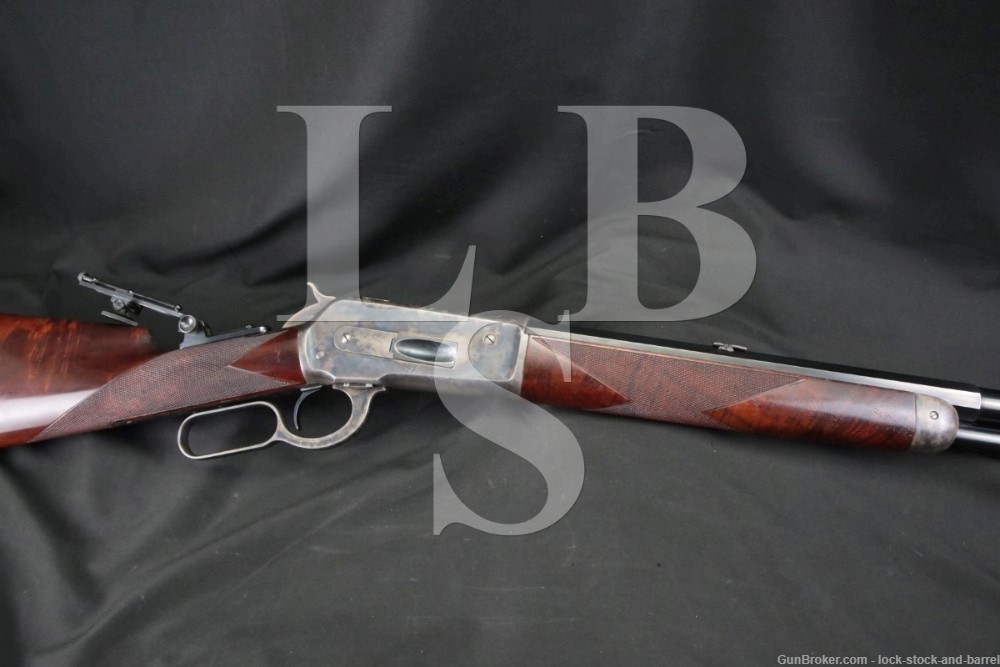 Sights / Optics: The front sight is a globe-style sight which accepts interchangeable inserts, dovetailed to the front of the barrel. Currently installed is a crosshair insert (no other inserts are included). The rear sight has two folding leaves, one is a “V”-notch and the other has no notch with a white triangle aiming reference. The leaves are mounted to a base dovetailed to the rear of the barrel. The top tang is drilled and tapped with a folding Vernier-style aperture sight, adjustable for windage and elevation.

Stock Configuration & Condition: The stocks are two-piece checkered select walnut with capped forend, straight grip, straight comb and case-hardened steel shotgun-style buttplate. The stocks have some scattered light nicks, scuffs and scratches, most in the buttstock. There is a spot of pooled finish in the wrist checkering on the left at the bottom. There is a repaired chip-loss at the top-front corner of the wrist on the left and a very thin crack at the same location on the right. The LOP measures 13″ from the front of the trigger to the back of the buttplate. The plate’s case color has muted somewhat with some minor surface oxidation and wear at the heel. Overall, the stocks are in Very Good condition as professionally restored.

Finish Originality: This rifle has been professionally restored by Roger Kurtz of Roger’s Restorations.

Overall Condition: This rifle retains about 96% of its current metal finish. The finish is lightly thinning at most edges. Most of the balance is scattered tiny spots of minor surface oxidation on the receiver. There is some light handling wear on the bottom of the receiver. The action shows light operational wear. Otherwise, there are only light handling marks. The screw heads range from sharp to lightly tool marked with strong slots. The markings are generally clear, the serial marking is shallow, but legible. Overall, this rifle is in Fine-plus condition as professionally restored.

Mechanics: The action functions correctly. The hammer has a half-cock notch. The trigger is set by pressing it forward until it clicks, resulting in a very light, crisp pull. We have not fired this rifle. As with all used firearms, a thorough cleaning may be necessary to meet your maintenance standards.

Box, Paperwork & Accessories: This rifle comes with a slip-on leather cover for the tang sight.

Our Assessment: Winchester’s first attempt at a lever action rifle capable of handling a rifle cartridge was the Model 1876, which was a heavier framed version of the Model 1873. However, the toggle-link action used in the gun was still limited to short cartridges like the .40-60 and .45-60 Win, its development rushed to ensure that the new model was out in time for the American centennial. The Model 1886 was designed by John Moses Browning to handle longer cartridges like the .45-70 Govt., the .45-90 Win. and .50-110 Win. cartridges. The Model 1886 utilized a locked-bolt action that was much stronger than the M1876, and some seem to think it is faster and smoother as well. The Winchester Model 1886 was touted as a lever action express model, capable of handling any of the North American game animals.

This rifle is chambered in .45-70 Government, a cartridge which has a long history and has had a new lease on life with the advent of smokeless powder and improved projectiles. It was the U.S. Army’s service cartridge for the 1873 Trapdoor rifles as well as being quite popular with hunters to this day. This rifle has been quite expertly restored, by none other than Roger Kurtz of Roger’s Restorations.

Truly an artist, Roger is known for restorations which do not make a rifle look as if it is brand-new, but rather to make the rifle appear as an extraordinarily high-condition original. He has been so successful at this that he began placing an unobtrusive marking on concealed surfaces of the guns he restores, to prevent unscrupulous characters from passing off his work as a genuine original Winchester, which it easily could! His abilities are on fine display on this 1886, a gorgeous rifle with a 32″ half-octagon barrel, checkered select walnut stocks with a shotgun-style buttplate and a nice set of sights.

This is an extremely nice-looking rifle, so please see our pictures. The 32″ barrel will help wring all the performance possible out of the .45-70 cartridge, especially with its modern advancements, and the half-round barrel profile helps it balance fairly well despite its length. We suspect the collectors as well as the shooters are going to be very interested!