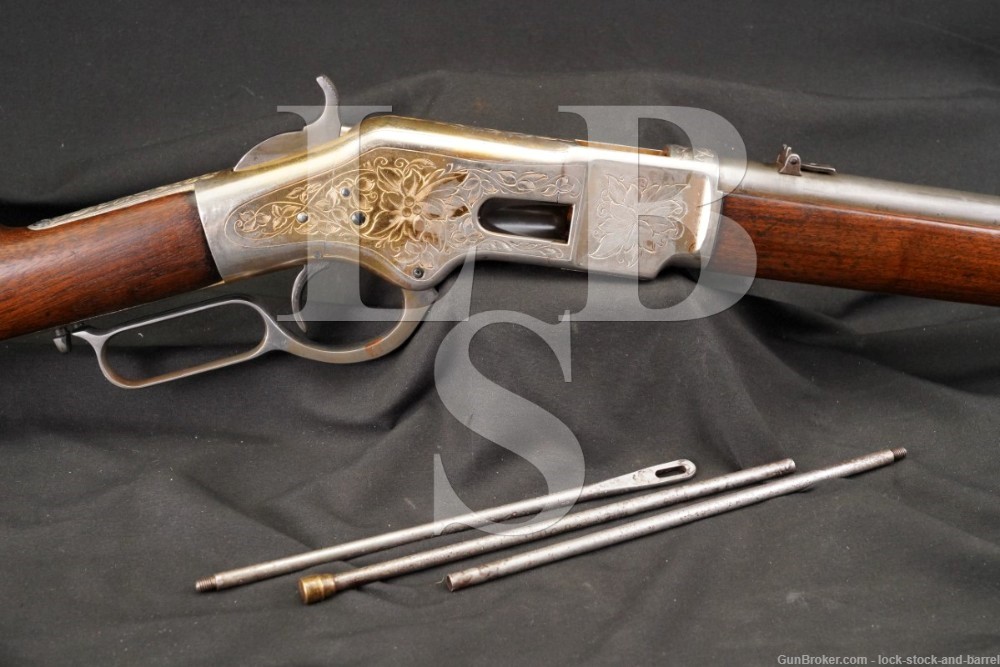 Markings: The top of the barrel was marked “WINCHESTER’S REPEATING ARMS. NEW HAVEN. CT / KING’S IMPROVEMENT-PATENTED- MARCH 29.1866. OCTOBER 16. 1860”, this marking is worn and incomplete. The lower tang is marked “41375” and “B”. The upper tang inlet has a worn serial marking with “75” legible at the end. The inside of the buttplate at the toe is marked “1375”. The left-front of the receiver is marked “209”. The receiver has foliate engraving with motif on the buttplate tang and the bottom of the lifter.

Sights / Optics: The front sight is a blade integral to the front barrel band. The blade appears to have been filed/polished down from its original configuration. The rear sight is a two-position folding sight. In one position, marked “1”, there is a “V”-notch. In the other position, there is a “V”-notch at the bottom of an aperture marked “3” and a “V”-notch at the top marked “5”. The rear sight assembly is dovetailed to the rear of the barrel.

Stock Configuration & Condition: The stocks are two-piece smooth walnut with a banded forend, straight comb, straight grip and gold-washed brass buttplate with a sliding door over a storage compartment (there is a three-piece cleaning rod assembly in the compartment). There are sling swivels mounted in the belly and on the forend band. The stocks have some scattered light nicks and scratches. The forend has broken through across the bottom-right and been repaired. There is a repaired crack behind the top tang which extends back to the left of the comb. There are spots of dark discoloration around the belly. The wood is generally shy to the metal. The LOP measures 13 3/8″ from the front of the trigger to the back of the buttplate. The plate has scattered wear, mostly at the heel and toe. Overall, the stocks are in Good-Very Good condition as refinished and repaired Antique.

Bore Condition: The bore is semi-bright with sharp rifling. There is some light erosion in the bore with infrequent pitting, mostly toward the muzzle-end.

Overall Condition: This rifle retains about 25% of its metal finish. The barrel and magazine tube have mostly worn or been cleaned to white showing some minor discoloration from oxidation and infrequent minor surface erosion. The receiver retains some gold-wash with scattered wear. There are some light nicks, scuffs and scratches. The action shows operational wear. There are some tool marks around the lever-screw. The mainspring strain-screw is missing. The screw heads range from sharp to tool marked with strong slots. The markings range from clear to worn and incomplete. Overall, this rifle rates in about Very Good condition as refinished Antique.

Mechanics: The action functions correctly. The mainspring strain-screw is missing. The hammer has a half-cock safety. We have not fired this rifle. As with all used firearms, a thorough cleaning may be necessary to meet your maintenance standards.

Box, Paperwork & Accessories: There is a three-piece cleaning rod stored in the buttstock.

This rifle is a Model 1866 Carbine 3rd Model that has been converted to .44 Henry Centerfire. Adding to its interesting features are engraving on the receiver as well as what appears to be a rack or inventory number stamped on the left-font of the receiver. The rifle has been refinished, retaining some gold wash on the receiver and retains a fairly nice bore, especially given its age. Most Winchester collectors would never think that their collection was complete without at least all three variations of the M1866, while some would argue for all of the variations of the four different models. This 1866 3rd Model Carbine will be a nice addition to a collection. Please see our photos and good luck!