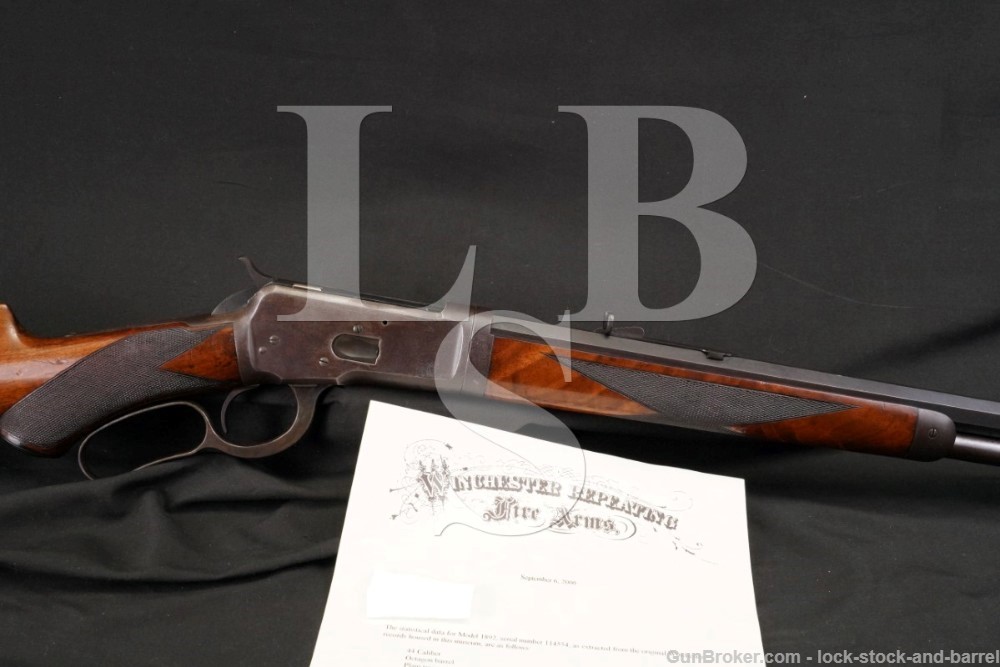 Sights / Optics: The front sight is a german silver blade in a slotted base dovetailed and screw-set to the front of the barrel. The rear sight is a “V”-notch semi-buckhorn leaf and elevator sight dovetailed to the rear of the barrel with the notch fine-adjustable for elevation. The top tang is drilled, tapped and filled for a peep sight (none included).

Stock Configuration & Condition: The stocks are 2-piece checkered select walnut with capped forend, capped pistol grip, straight comb and steel crescent buttplate. The forend has some scattered light nicks and scratches with one more notable ding on the bottom-right at the front “V” of the checkering pattern. The buttstock has several scattered light nicks, scuffs and scratches with a bruise at the top edge of the checkering on the left and some minor loss at the toe. There are no cracks. The checkering is generally well defined. The LOP measures 12 3/4″ from the front of the trigger to the back of the buttplate. The plate has gone to a fairly uniform moderate patina with a few spots of solid erosion. Overall, the stocks are in Very Good condition.

Bore Condition: The bore is mostly bright and the rifling is sharp. There is some very minor oxidation at the muzzle-end which may clear up with a patient cleaning.

Overall Condition: This rifle retains about 40% of its metal finish. Most remaining finish is in the barrel and the bolt with some case color visible on the trigger guard portion of the lever. Most other surfaces have gone to a fairly uniform patina with some scattered light surface oxidation. There is scattered minor erosion on the receiver and barrel extension. There is a band of more notable erosion on the barrel above the magazine bracket. There is wear on the magazine tube from disassembly/reassembly. There are a few scattered minor nicks and scratches. The action shows operational wear. The screw heads are sharp. The markings are clear. Overall, this rifle is in Good-Very Good condition.

Box, Paperwork & Accessories: This rifle comes with a Winchester Records Letter which confirms that this rifle was received in the warehouse March 24, 1900 and shipped the same day on order number 54990. The rifle shipped in its present configuration, chambered for .44 WCF with an octagonal barrel, checkered stock with pistol grip and as a takedown.

Our Assessment: The Winchester Model 1892 rifle and carbine replaced the toggle link action of Winchester’s Model 1873 with a breechblock locked with two rectangular locking bolts that made it much stronger and suitable for the higher pressures of smokeless powder. It was designed by John Browning and was sort of a scaled-down Model 1886 rifle, the first he designed for Winchester. The Model 1892 rifle was popular with ranchers and later was the rifle of choice for western movies and TV shows, John Wayne used both M1892 rifles and carbines in many of his western movies. The M1892 rifles again became popular in the 1980s with the advent of Cowboy Action shooting, as they were smooth and dependable.

This is an very desirable example of the 1892 rifle. The rifle was ordered as a takedown with checkered pistol grip stocks, as confirmed by the included Winchester Records letter. While the letter does not note the deluxe walnut used for the stocks, it was common for rifles to be fit with deluxe walnut when ordered with special features. While the rifle shows honest wear consistent with its age, it retains a surprisingly nice bore and strong mechanics. This rifle will be of interest to the Winchester collectors and still has a very shootable bore. Please see our photos and good luck!