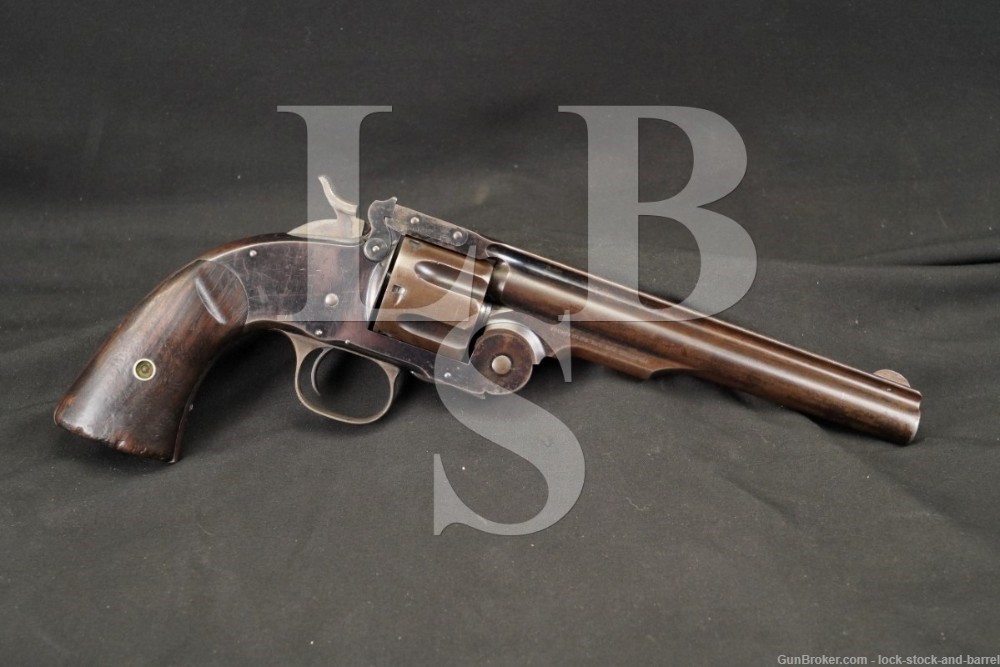 his revolver comes to us from 1875 as a 1st Model Schofield in .45 S&W, with inspector marks, “US” marking on the toe and all serialized parts match, which is amazing for a revolver of its age and viable role in military history. The U.S. Army adopted the .44 S&W American caliber Smith & Wesson Model 3 revolver in 1870, making the Model 3 revolver the first standard-issue cartridge-firing revolver in US service. Most military pistols until that point were black powder cap and ball revolvers, which were (by comparison) slow, complicated, and susceptible to the effects of wet weather. In 1875 the US Ordnance Board granted Smith & Wesson a contract to outfit the military with Model 3 revolvers incorporating the design improvements of Major George W. Schofield (known as the “Schofield revolver”), providing that they could make the revolvers fire the .45 Colt (AKA “.45 Long Colt”) ammunition already in use by the US military. Smith & Wesson instead developed their own, slightly shorter .45 caliber round, the .45 Schofield, otherwise known as the .45 S&W. This item still has some of its bluing left, the bore is mostly semi-bright with highly defined rifling. If you are a collector of Smith & Wesson or martially marked firearms, your collection is not complete without a US Schofield, especially one that has survived this nicely.