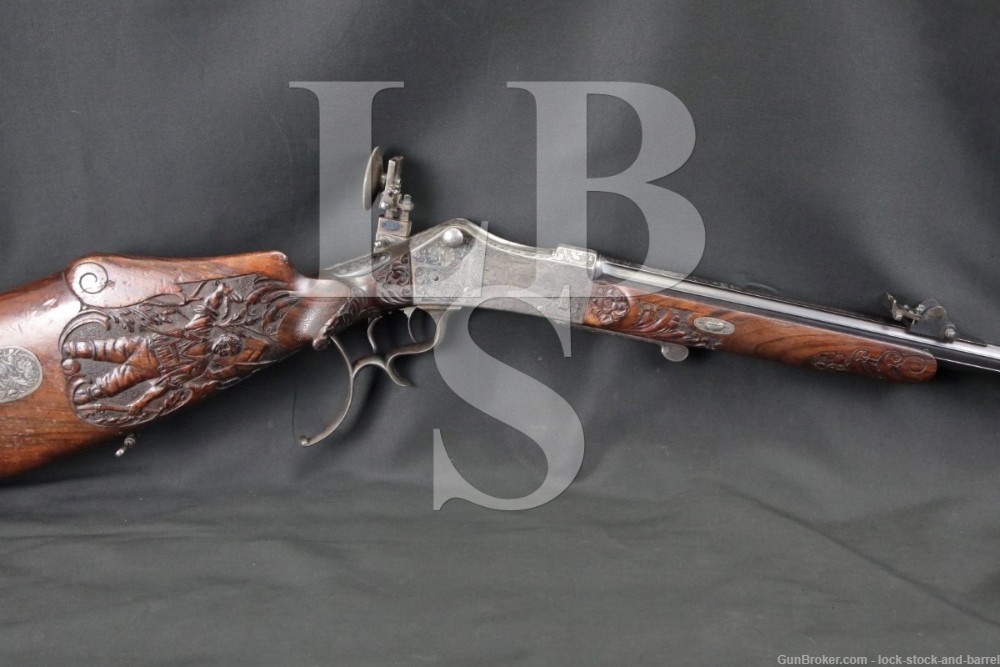 The Schuetzen style target rifles were produced from the late 19th century through the early 20th century primarily in Imperial Germany. The gun’s name comes from the German word Schütze (lit. shooter) and were made for competitive target shooting which was popular at the time. The guns were produced mainly by small gunsmiths scattered throughout the German Empire who beautifully engraved their firearms. These guns were made for competitive shooting and have target sights, double set-triggers, interesting grip patterns on their wrists and unique cheek-pieces. The rifles were chambered for a variety of calibers, many of which are obsolete today making positive identification especially difficult. The production of these ornate rifles began to dissipate after WWI.

This particular rifle was made by the highly skilled Munich based gunsmith Karl Gebert sometime between 1891-1914. Gebert was Court Gunsmith to the Bavarian crown, the House of Wittelsbach, and this gun would have been made either during the reign of King Otto (ca. 1886-1913) or his successor King Ludwig III (ca. 1913-1918). The Bavarian monarchy was abolished at the end of the First World War, a sad end to the 738 year old Wittelsbach monarchy. The gun has proof marks which indicate it was made after 1891, and based on the marking which indicates the gunmaker’s role as a Court Gunsmith to the Wittelsbach throne, this rifle could not have been made later then 1918 (although it was likely made before WWI when commercial production was largely ended to support the war effort and most of the men who participated in competitive shooting were drafted). This particular specimen has no marking that indicates what cartridge it is chambered for. We measured the bore at approximately 7,5mm but we were unable to determine the specific cartridge the gun takes, these rifles were made for a variety of obscure rounds which are no longer in production (we recommend having the bore cast to determine the appropriate cartridge to use with the rifle). Aside from this, the rifle remains mechanically sound. Aesthetically, this rifle is a work of art with beautiful engravings that celebrate German culture and competitive shooting. This gun is as much a work of art as it is a firearm. This will certainly appeal to fans of historical firearms.