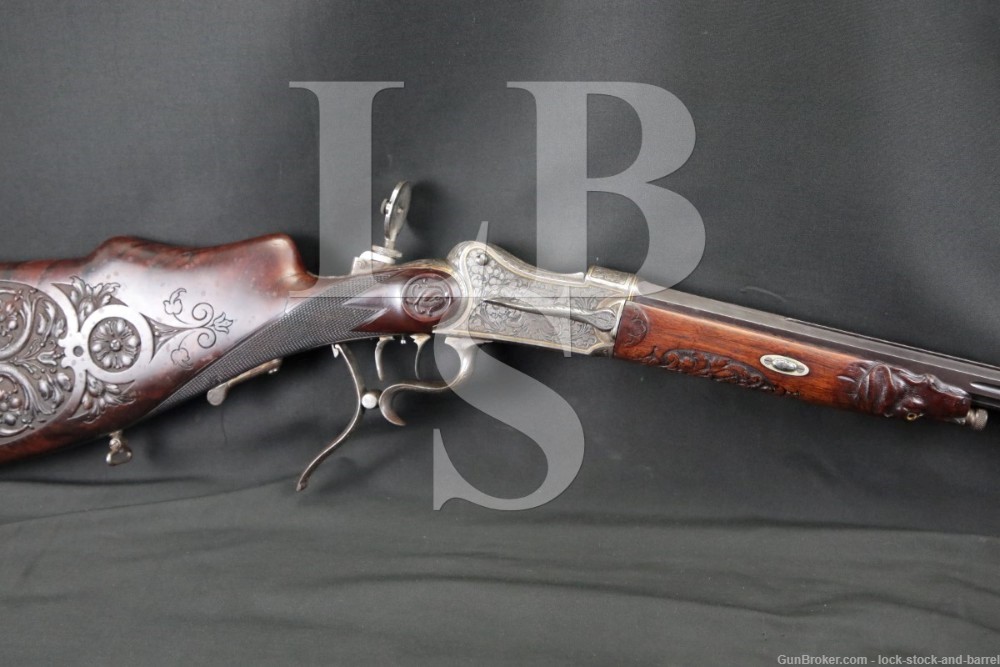 The Schuetzen style target rifles were produced from the late 19th century through the early 20th century primarily in Imperial Germany. The gun’s name comes from the German word Schütze (lit. shooter) and were made for competitive target shooting which was popular at the time. The guns were produced mainly by small gunsmiths scattered throughout the German Empire who beautifully engraved their firearms. These guns were made for competitive shooting and have target sights, double set-triggers, interesting grip patterns on their wrists and unique cheek-pieces. The rifles were chambered for a variety of calibers, many of which are obsolete today making positive identification especially difficult. The production of these ornate rifles began to dissipate after WWI.

This particular rifle was made by the Suhl based firm Christoph Funk Gewehrfabrik. The company was founded in 1835 and remained in business until 1965, meaning the family owned business remained in operation for nearly 130 years. The Christoph Funk Gewehrfabrik survived both World Wars, and its factory remained in operation in the Deutsche Demokratische Republik (ca. 1949-1990, colloquially referred to as East Germany) until 1965 when it was absorbed into the Bühag Combine (a collective of small gunmakers) before the building was demolished in the 1970s, a sad ending for such an impressive small family owned firm. We measured the bore at approximately 7,5mm but are unsure which specific cartridge the gun was originally chambered for, these rifles were made for a variety of now obsolete rounds and the bore should be cast to determine the appropriate cartridge for the rifle. The gun remains mechanically sound despite its age. Perhaps even more importantly, the rifle is beautiful with impressive scroll engravings and reliefs. This is as much a work of art as it is a firearm. This will certainly appeal to historical collectors.