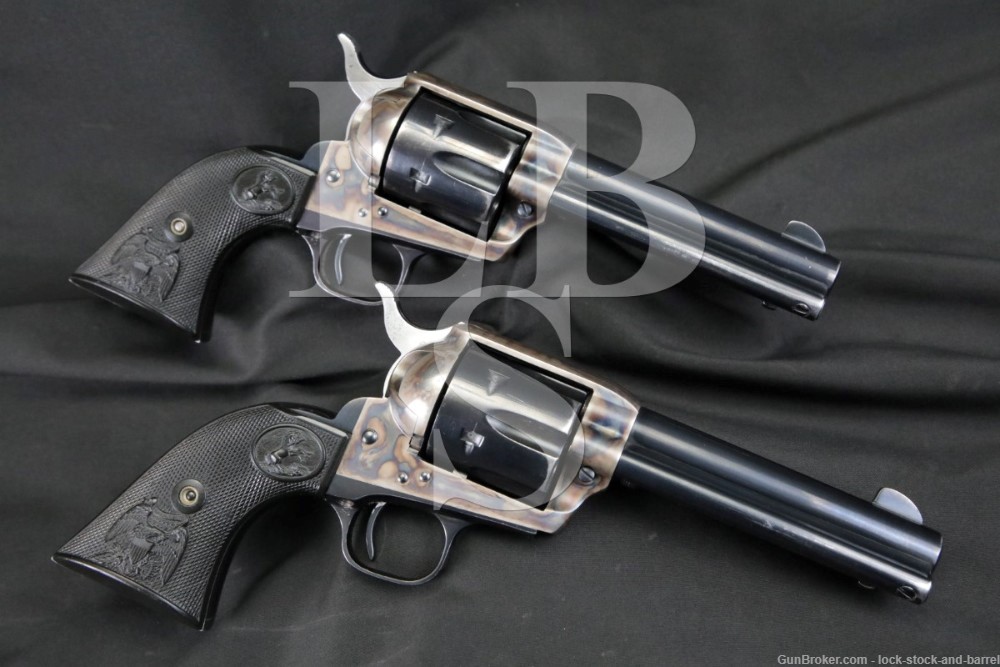 Some changes were incorporated in an effort by Colt to keep prices down. One new change was a pressed-in cylinder pin bushing instead of the removable ones used in 1st and 2nd Generation cylinders. Also, the ratchet at the rear of the cylinders was re-shaped, which also necessitated a different shape on the rotating hand. And for some unknown reason, the pitch of the barrel’s threads was changed from the 20 threads per inch (TPI) as used on 1st and 2nd Generation SAAs to 24 TPI for these new ones. Toward the end of 2nd Generation production Colt had begun using some investment cast parts, but the frames continued to be forged. The introductory caliber for 3rd Generation SAAs was .45 Colt, but other chamberings would soon follow.

This is a consecutive pair of SAA revolvers made in 2003 chambered for .38 Special with 4 3/4? barrels and American Eagle stocks. The actions have had some work, with a very smooth hammer pull, light triggers and the guns retain great bores as well as strong mechanics. The revolvers are in Very Good-plus condition, showing signs of responsible use. This would be a nice set for the aspiring Cowboy Action shooter or an addition to a Colt collection.