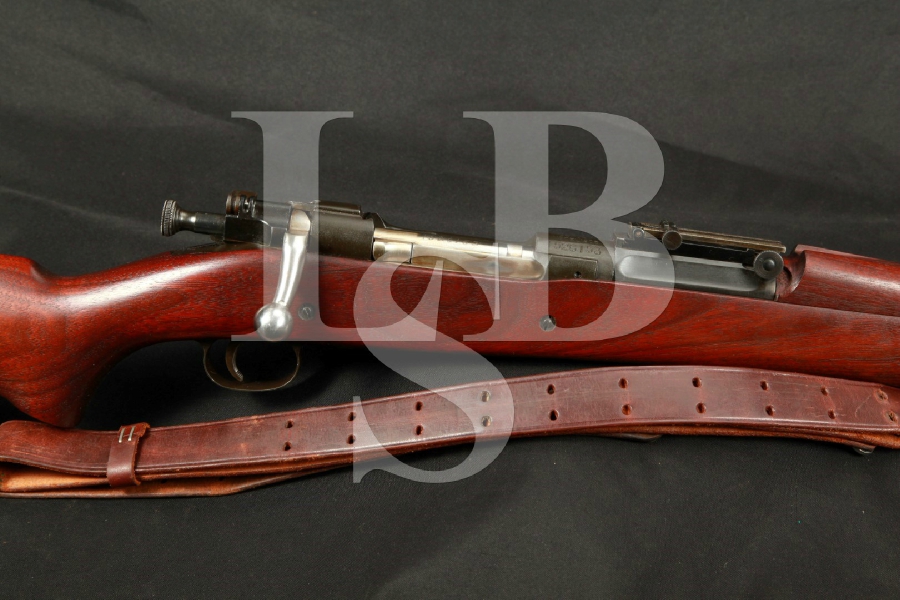 SOLD FOR:$5,052
LSB#: 150326RC32
Make: Springfield Armory
Model: 1903
Serial Number: 1526153
Year of Manufacture: ”1938 -1940 Assembly only after 1939” (page 370 of Joe Poyer’s book, The M1903 Springfield Rifle and its Variations) Barrel Date 3 – 39
Caliber: .30-06 Springfield
Action Type: Bolt Action, Internal Magazine
Markings: The top of the receiver is marked “U.S. / SPRINGFIELD / ARMORY / MODEL 1903 / 1526153”. The lower lip of the muzzle is marked with a “star”. Star gauged barrels were installed on M1903 National Match rifles. The star gauge record number “A / 1414”, is stamped on the top of the barrel about 3 inches ahead of the rear sight base. (see pages 165-166 of Joe Poyer’s book, The M1903 Springfield Rifle and its Variations). The top of the barrel is marked “S A / flaming bomb / 3 39” and “P”. The safety is marked “SAFE READY” and the magazine cutoff is marked “ON OFF”. The bolt is etched with the serial number. The bottom of the bolt handle is marked “F” and the top is marked “D1”. The bottom of the cocking piece on the bolt body is marked “CV” and “C466109”. The “CV” is a National Match marking (see page 231). The bayonet lug is stamped “H”. The right side of the front sight is marked “2”. The left side of each through bolt is marked “2”. The right side of the barrel band is marked “U”. The front of the grip is marked with a “circled P” firing proof. The bottom of the buttstock is marked with the drawing number for a “C” stock ,”D35379”, followed by the serial number. This is indicative of a National Match rifle as some were marked in this manner (see pages 110-111). The left side of the stock above the trigger is marked “S.A. / S.P.G. in a box”. This is a Springfield Armory inspector’s mark that was used on new and rebuilt rifles in 1940 (see pages 382-383). The magazine cutoff relief is marked “8” and with an “S”. The “S” indicates that the manufacturer of the stock was in fact Springfield Armory and not a subcontractor (see page 381). The top of the rear handguard is marked “C64107”. The rifle sling is marked “W.T.&B.CO / 1918 / C.A.C.” *. WT & B was a manufacturer of M1903 slings.
Barrel Length: Approximately 24 Inches
Sights / Optics: The front sight is a pinned blade. The rear sight is a “U” notched blade attached to a fully adjustable sight ladder marked from “3-27”. When flipped up separate notches and an aperture on the ladder can be used for sighting.
Stock Configuration & Condition: The two piece, oil stained hardwood has a pistol grip, metal nosecap, stacking loop, barrel band, two sling loops, two through bolts and a metal buttplate with hinged door for storage. The stock shows various light scrapes, scuffs and compression marks. The underside of the forearm shows some scratches. The LOP measures 13 1/8 inches from the front of the trigger to the back of the buttplate. The stock rates in about Fine overall condition.
Type of Finish: Parkerized
Finish Originality: Original
Bore Condition: The bore is bright. The rifling is deep. There is some light frosting near the muzzle. The bore shows an M.E. of 0.5.
Overall Condition: This rifle retains about 95% of its metal finish. The barrel and front sight show thinning, discoloration and scrapes. The bottom metal shows a small scratch and some light scrapes. The receiver shows some light thinning and light scrapes. The buttplate shows some discoloration. Some of the screw heads show use. The markings are deep. Overall, this rifle rates in about Very Good to Fine condition.
Mechanics: The action functions correctly. We have not fired this rifle.
Box, Paperwork& Accessories: The rifle comes with a leather sling that has oxidized and scratched metal tabs. The leather shows a small tear at the edge at the front sling loop, scrapes and discoloration. The sling is in about Good condition.
Our Assessment: This Springfield Armory Model 1903 NM is a National Match rifle. It was factory reconditioned at Springfield Armory after it was used as a competition rifle. It has a “star gauged” barrel with the star gauge record number stamped on top of the barrel, an original Springfield Armory stock that is marked with the correct drawing number& the rifles serial number and a cocking piece on the bolt which is marked “CV” which is a National Match rifle marking. This rifle looks great and has nice deep markings. It will make a collector very happy. Here is some information on National Match Rifles from Wikipedia: “…selected rifles produced at Springfield Armory for National Match shooting competition. Production barrels were measured with star-gauges, and those meeting specified tolerances were stamped with an asterisk shaped star on the muzzle crown. These barrels were fitted to selected receivers with hand-fitted and polished parts. The bolt was left unblued while the receiver and barrel were finished with a black Parkerizing process. Some bolts have the safety direction reversed to prevent it from striking the nose of a right-handed shooter, and those made from 1924 to 1929 have the knurled cocking piece removed to decrease lock time. Early rifles used the type S stock until the type C stock became standard in 1929. Rifles made for sale to NRA members (priced at $40.44) were drilled and tapped for a Lyman 48 receiver sight and had either a type B (or NB) stock with no grasping grooves and a noticeable drop at the heel for a long pistol grip, or a special National Match stock with a high comb and pistol grip. Total production was 28,907. Most were issued to service teams and 25,377 were reconditioned at Springfield armory after one year of match use. Reconditioned rifles have a large gas-escape port drilled into the left side of the receiver.”