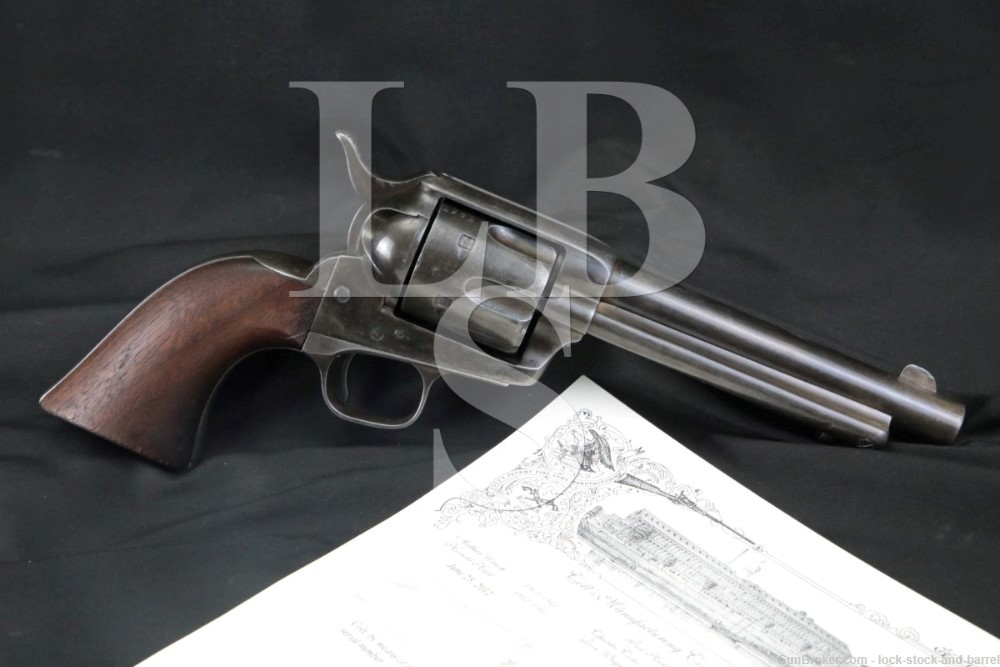 This revolver started out life in 1880 as a commercial SAA chambered for .44-40 WCF and shipped to one of Colt’s largest dealers, Hartley & Graham in New York. It has since been assembled as an “Artillery Model”. Between 1900 and 1903, Colt altered and refinished 5,444 revolvers into “Artillery” models (5 ½” barrel). Per Kopec and Fenn, “A single Artillery revolver often will have parts from three or four different Cavalry revolvers”. The “Artillery” moniker is a collector’s term, as the modified revolvers were most notable for their issue to U.S. Artillery units in the Spanish-American war, however the later 1900-1903 altered revolvers saw mixed serial numbered parts.

While there are two known examples of commercial SAAs which were swept up in this conversion process, ironically also originally shipped to Hartley & Graham, we were not able to find any information which would indicate that this revolver is one such. This combined with the 1900-1903 conversion process happening well after David F. Clark would have been inspecting SAA revolvers, leads us to suspect that the frame’s martial markings are not genuine.

For all that, it certainly looks the part and it is very likely that other components used to assemble this “Artillery Model” came from genuine U.S. issued revolvers. The barrel and cylinder have matching numbers and inspection marks which appear genuine. This revolver must have a very interesting history, if only it could be told. All of the Colt 1st Generation revolvers are heavily collected, and this example has quite an interesting mix of parts, so it could serve as a source of parts for other SAAs as well as displaying well as an “Artillery”