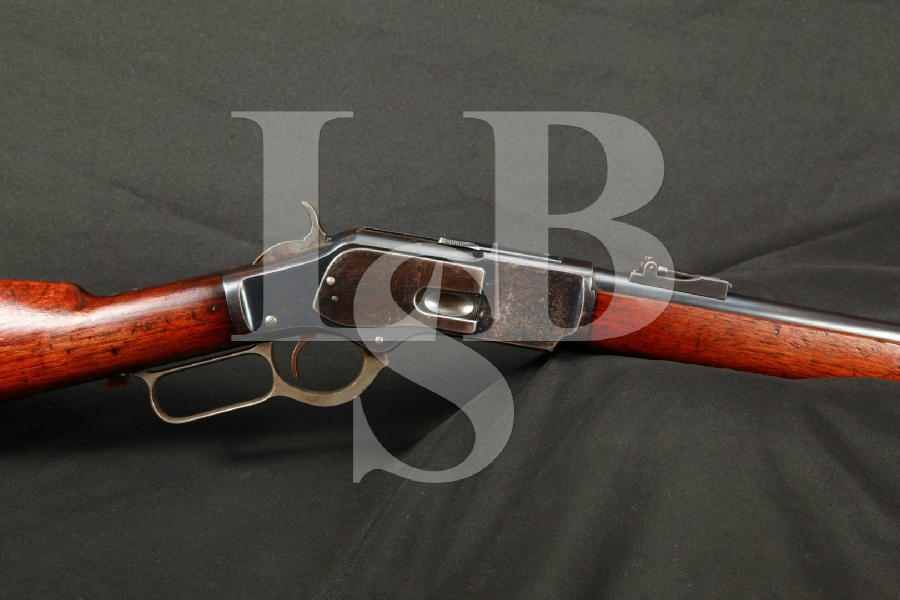 SOLD FOR:$3,030
LSB#: 150708EB58
Make: Winchester
Model: Model 1873 Musket
Serial Number: 570670B
Year of Manufacture: 1903
Caliber: .44-40
Action Type: Lever Action Rifle with Tubular Magazine
Markings: The top of the barrel is marked “WINCHESTER’S REPEATING ARMS. NEW HAVEN, CT / KING’S-IMPROVEMENT PATENTED MARCH 29, 1866. OCTOBER 16, 1860.” and “44 W.C.F.”. The lower tang is marked “570670B”. The top tang is marked “MODEL 1873”. The bottom of the brass carrier is marked “44 CAL.” There is a “6” on the underside of the frame, ahead of the trigger.
Barrel Length: 30″
Sights / Optics: The front sight is a fixed blade set on a base and the rear sight is a factory Musket-Type, flip-up Ladder sight. The upper tang is factory drilled and tapped for the mounting of a peep sight. The set screws are missing.
Stock Configuration & Condition: The stocks are the original oil finished pieces, showing the Winchester signature ‘red’ color. The finish has thinned more on the forearm than the stock, though better than 60% of the original finish is retained throughout and the wood has darkened nicely and appropriately, especially where it contacts the metal. There are no cracks to the buttstock and only one or two hairline cracks beginning to form along the grain at the rear of the forearm. The pieces show a number of handling marks and dings, though none significant enough to single out. The wors wear to the stock is on the left side near the swifel and the belly. The wood to metal fit is great. The LOP measures 12 3/4″ from the front of the trigger to the back of the case colored steel buttplate. The colors of the buttplate have muted and there are scattered patches of surface erosion. The stocks rate in about Excellent overall condition, especially given the age.
Type of Finish: Blue
Finish Originality: Factory Original
Bore Condition: The bore literally made us say WAO. The bore is bright and the rifling is pronounced with light wear. There is no erosion in the bore and this bore is one of the best we’ve seen on a ’73.
Overall Condition: This rifle retains about 70% or more of its metal finish. There are some freckles of surface rust near the muzzle and some thinning of the finish here as well. The balance of the barrel still has the majority of the factory applied finish. The barrel bands show finish loss and a mild patina. The lever and hammer match well, with muted case colors and light drift to patina. Fire blue can still be seen on the loading gate. The frame has a number of scratches and surface marks, with frosting scattered on all sides. There is some of the commonly seen streaking to the frame finish, as a result of the nickel content in the steel here. This is a high condition rifle and though we have described a lot of wear, the vast majority of the finish is still retained. The screw heads are very good and show light wear. The markings are clear. Overall, this rifle rates in about Fine – Excellent condition.
Mechanics: The action functions correctly. We have not fired this rifle. As with all previously owned firearms, a thorough cleaning may be necessary to meet your maintenance standards.
Box, Paperwork & Accessories: None
Our Assessment: Per Wikipedia: One of the most successful and certainly one of the most famous Winchester rifles was the Winchester Model 1873; known as “The Gun that Won the West” for its predominant role in the hands of Western settlers. Originally chambered for the .44-40 cartridge, its popularity led Colt to manufacture a version of the Single Action Army revolver chambered for the same round, called the “Frontier Model”. Winchester produced three variations of the Model 1873: the rifle, carbine, and musket, and only 5% of total production were muskets. This example is a far better than average gun, with all original finish and lots of it left. The bore would make you look twice, we rarely see them this bright. This is definitely the best Musket we have ever sold and it is also one of the best ’73’s we’ve ever sold. This is a gun that we do not hesitate in saying will make you happy to receive and have as part of your collection.