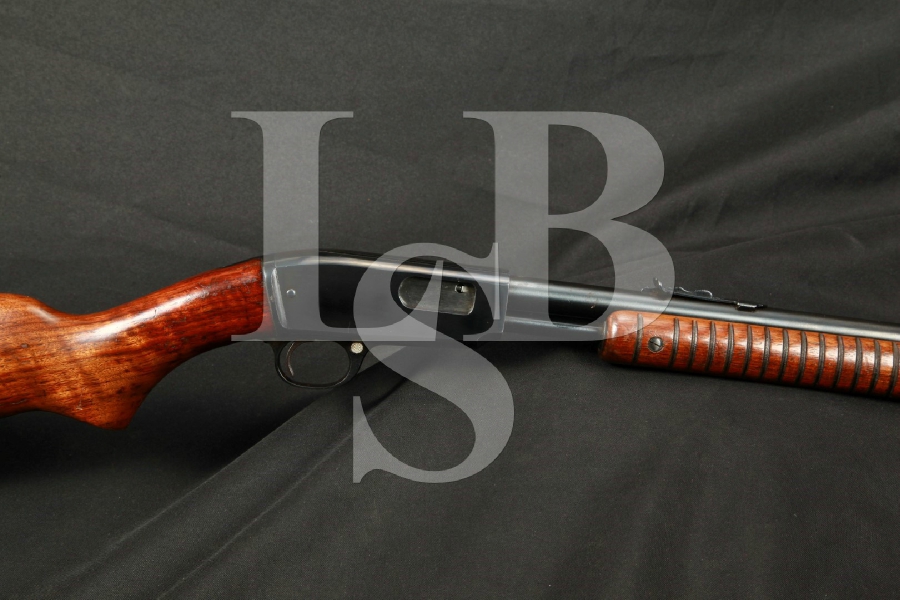 SOLD FOR:$2,012
LSB#: 150708EB16
Make: Winchester Repeating Arms Co.
Model: Model 61
Serial Number: 285950
Year of Manufacture: Ca. 1960 – Proofhouse.com puts the date of manufacture at 1958, though we know the gun wasn’t produced until 1960, when winchester began making the .22 WMRF. We have frequently seen inaccuracies in proofhouse’s information.
Caliber: .22 Magnum, WMRF
Action Type: Pump / Slide Action with Tubular Magazine
Markings: The left side of the barrel is marked “WINCHESTER / TRADEMARK / MADE IN U.S.A.” and “MODEL 61 / 22 W.M.R.F.” The top of the barrel and receiver are marked with an Oval “PW” proof. The underside of the receiver and barrel assembly are marked “285950”. There is a punch mark on the underside of the frame, to the left of the trigger.
Barrel Length: 24” Round
Sights / Optics: The front sight is a silver beaded blade dovetailed into the barrel and the rear sight is a “U” notched, leaf & elevator sight, also dovetailed into the barrel. The top of the receiver is grooved to accept claw mount sight/scope bases.
Stock Configuration & Condition: The two piece pistol grip walnut stocks feature 17 grooves on the forend which is part of the slide assembly. There are a handful of scattered marks and dings, with a few scratches through the finish on both pieces. The wood has darkened where it has contacted the metal and while we do not believe is has been sanded, there may be a post production finish applied over the existing finish – we are not certain of this, though the finish looks a bit thicker than expected. The wood is generally proud of the metal. The LOP measures about 13 ½” from the front of the trigger to the back of the black plastic checkered shotgun style butt plate which sports a Winchester logo and is in Very Good condition. The stocks rate in about Fine overall condition.
Type of Finish: Blue
Finish Originality: All Original
Bore Condition: The bore is bright and the rifling is sharp. There is no erosion in the bore.
Overall Condition: This rifle retains about 92% of its metal finish. There is mild wear at the muzzle under some surface rust, with some surface rust also visible on and under the rear sight and freckled on the exterior of the barrel near the chamber. There are some scratches at the top of the barrel near the chamber and lighter scratches and marks visible elsewhere on the rifle. The underside of the frame shows some wear to the edges from take down and reassembly. The vast majority of the finish is retained on this rifle and much of the surface rust will likely clean with some careful effort. The screw heads are sharp. The markings are clear. Overall, this rifle rates in about Fine condition.
Mechanics: The action functions correctly. We have not fired this rifle. As with all previously owned firearms, a thorough cleaning may be necessary to meet your maintenance standards.
Box, Paperwork & Accessories: None
Our Assessment: The Winchester Model 61 was the fourth in a series of Slide-Action rifles produced by Winchester replacing the Model 1890, Model 1906 and Model 62. The hammerless Model 61 was produced from 1932 through 1963 with over 342,000 guns sold. And the .22 Magnum being among the rarest.

The .22 WMR was introduced in 1959 by Winchester, but was not used by Winchester until the Winchester Model 61 slide rifle could be chambered for it, in 1960. By that time, Smith and Wesson and Ruger had revolvers for it, and Savage had come out with the Model 24. It was the only successful rimfire cartridge introduced in the 20th Century.

This sharp rifle is the first model Winchester ever made in .22 WMRF and likely from the first year it was made. The gun is sharp and will improve with some cleaning and removal of the freckles. This is an early variation of a desirable gun in great condition. What more could we Winchester collectors ask for?