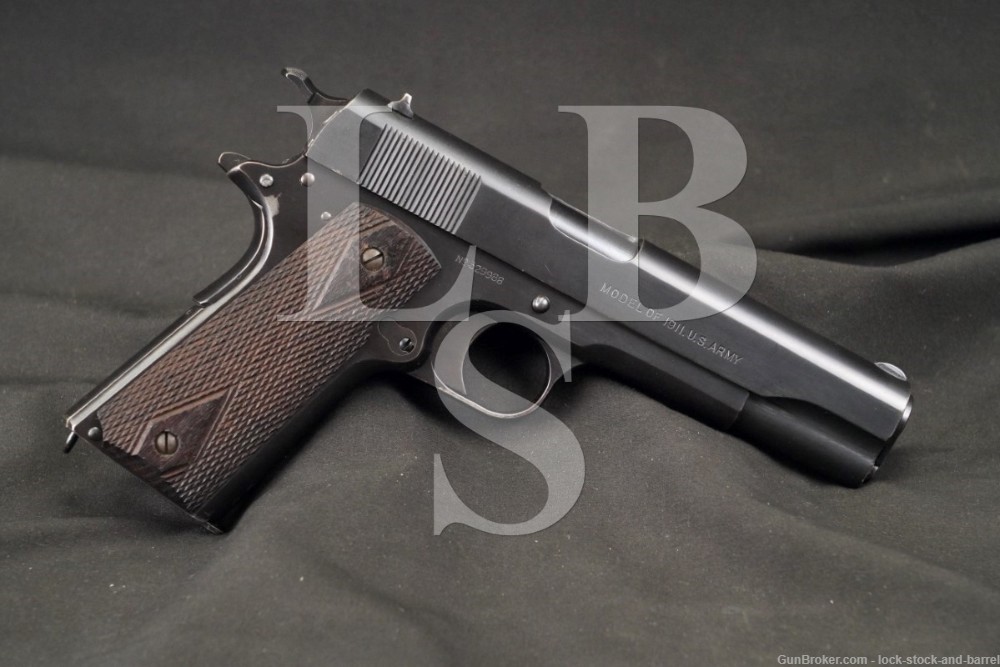 Stock Configuration & Condition: The grips are two-piece checkered walnut with smooth diamonds around the grip screws. The grips have scattered light nicks and scuffs with general light handling wear, more notable toward the bottom. The checkering is generally well defined. There are no chips or cracks. Overall, the grips are in about Very Good condition.

Bore Condition: The bore is gray with well defined rifling. There is light-moderate erosion scattered through the bore.

Overall Condition: This pistol retains about 87% of its metal finish. The finish has some wear at edges and in the grip areas. The worn areas show slight discoloration. There are scattered nicks, scuffs and scratches, most not through the finish. The action shows operational wear. The screw heads are tool marked with strong slots. The markings range from clear to worn and incomplete. The “US PROPERTY” marking has been removed. Overall, this pistol is in about Very Good condition as refinished.

Box, Paperwork & Accessories: This pistol comes with a single 7-round magazine. The magazine was originally two-tone, it is now blued. The magazine shows operational wear with intact feed lips and a strong spring. Also included is a Colt Archives letter which confirms that this pistol was shipped April 4, 1918 to Springfield Armory as one of 3,500 guns of the same type in the shipment.

This is a U. S. Government marked Colt 1911 pistol made toward the end of WWI in 1918. The pistol has been refinished with a durable chrome plating and shows signs of use since the new finish was applied. Most of the markings are in good shape, though the US Property marking has been removed, a common practice when it was believed that it was illegal to own material so marked. This is a neat old 1911 that will be a nice addition to any collection.