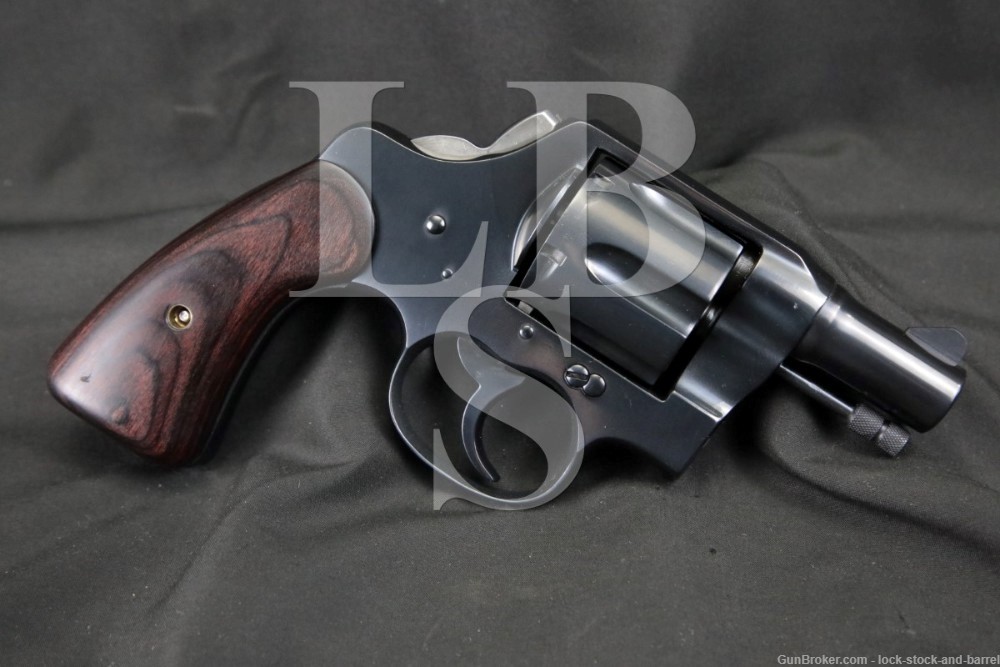 Make: Colt, we do not know who customized this revolver.

Sights / Optics: The front sight is a serrated, ramped blade. The rear sight is a “U” shaped groove in the top of the receiver.

Stock Configuration & Condition: The grips are two-piece smooth wood. The grips have minor handling wear with the most notable mark a nick on the right panel toward the bottom-rear. There are no chips or cracks. Overall, the grips are in Fine-plus condition as not original to the gun.

Overall Condition: This handgun retains about 98% of its current metal finish. The finish is generally strong throughout. There are some scattered nicks and minor erosion under the finish. The action shows minor operational wear. The screw heads range from sharp to lightly tool marked with strong slots. Remaining markings range from clear to worn, but legible. Some markings were removed when the gun was customized. Overall, this revolver is in Fine condition as customized.

Mechanics: The action functions correctly. The cylinder lockup has no play with the trigger depressed on all chambers. The single action trigger pull is crisp, however with the bobbed hammer it is difficult to cock. The double action is smooth. We did not fire this handgun. As with all used firearms, a thorough cleaning may be necessary to meet your maintenance standards.

Our Assessment: With America’s entry into WWI, it was found that Colt could not produce enough Model 1911 pistols for the U.S. Army. Some .38 revolvers were distributed to rear echelon troops, guards, and the Navy, but the Army also wanted some commercial revolver production to be used for a revolver capable of using the same ammunition as the 1911 semi-auto. Both Smith & Wesson Hand Ejector and Colt New Service revolvers chambered for .45 ACP were approved as substitute standard and designated the Model 1917. Colt’s M1917 was built on the same large frame as the Colt New Service revolver, making for a very rugged service revolver. This example has assembly numbers on the frame, crane and cylinder, consistent with those applied to revolvers which went through an Arsenal Overhaul to ensure that hand-fitted parts could be re-assembled after the new finish was applied.

Since leaving military service, this example has been heavily customized. The grip frame has had the corners rounded at the bottom, the hammer has been bobbed, and the barrel has been significantly shortened. Rounded out with a new blue finish, this is a very distinctive revolver which, while not particularly compact, is smaller than most any contemporary .45 revolver and can be fed by moon clips.