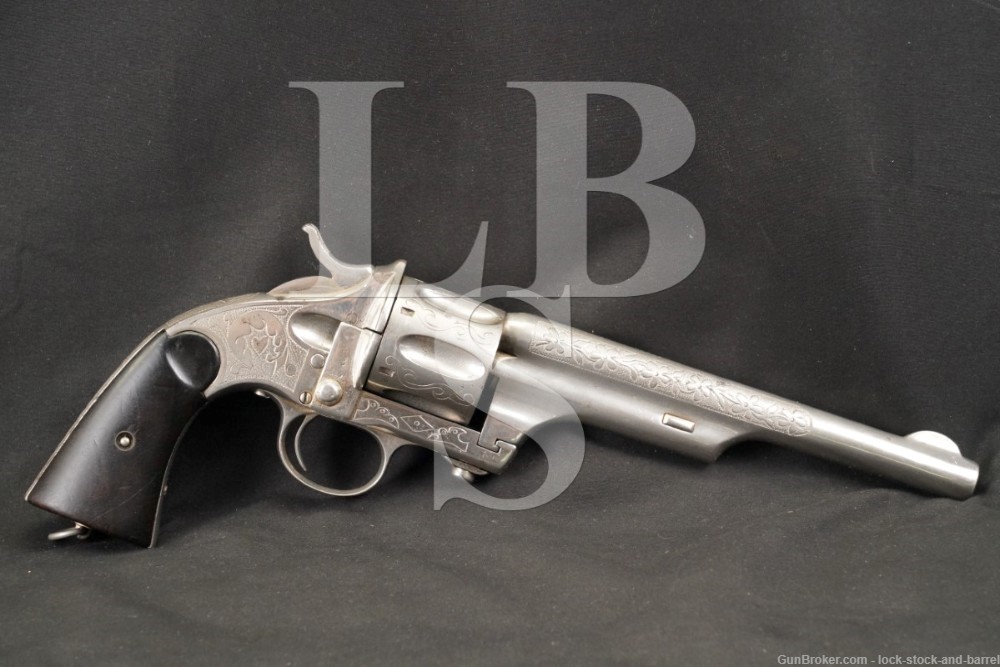 Caliber: .44 Russian (please note, this revolver was chambered for archaic black-powder cartridges and can not handle the pressure of a modern smokeless powder round. We recommend consulting a qualified gunsmith to determine the appropriate cartridge and load to use with this antique.)

Markings: The revolver features floral engravings on all of the external components. The left side of the grip-strap is marked “22” which is the serial number. The rear of the cylinder is marked “22”. The right side of the frame is marked “17” vertically. The top of the barrel is marked “MERWIN HULBERT NY”. We did not remove the barrel assembly for fear of causing undue wear to the well preserved revolver.

Sights/ Optics: The front sight is a blade fixed by the muzzle. The rear sight is a “U”-notch fixed at the top of the frame, just behind the cylinder.

Bore Condition: The bore is grey with mostly sharp rifling. light-moderate erosion concentrated in the grooves.

Overall Condition: The revolver retains about 90% of its metal finish. There are some light handling marks, nicks and scuffs. Notably, there is some light oxidation on the front strap and some discoloration around some recesses. Also, the barrel has some light play on the frame. The markings remain clear and impressive. The screwheads are only lightly tooled and remain serviceable. Overall, the revolver is in Fine condition for an Antique.

Mechanics: The barrel has some light play on the frame, but otherwise the gun’s action functions correctly. The cylinder locks with light play on each chamber. We have not fired this revolver. As with all used firearms, a thorough cleaning may be necessary to meet your maintenance requirements.

Our Assessment: Merwin, Hulbert & Co. was a New York based firearms company that originated in the mid-19th century. The company was formed when Joseph Merwin partnered with brothers William and Milan Hulbert (the brothers owned a majority of the shares in Hopkins & Allen) to create Merwin, Hulbert & Co. in 1868 (Merwin had a prior company that folded when the Civil War ended). The company, despite being lesser known today, manufactured a number of impressive and innovative firearms that were widely popular in their day. Unfortunately, the company made a series of poor business decisions and ran into what can only be described as ill fortune (a company associate stole the firm’s operating capital in one particularly sad turn of events) which all began to put its long-term sustainability at risk. Merwin passed away in 1888 and the company became Hulbert Brothers and Co., but the company was in decline and in 1894 the company went bankrupt and was liquidated two years later. Several of the company’s innovative designs would remain in production through Hopkins & Allen until that company also folded during WWI.

This particular revolver is a beautiful specimen which demonstrates the skilled craftsmanship Merwin & Hulbert put into their guns. The gun is an early-manufactured large-frame revolver that has an open top (i.e. no top-strap), a square-butt and fluted cylinder. There is no caliber designation on the frame, but the gun chambered .44 Russian cartridges. The gun has an impressive nickel finish and beautiful floral scroll engravings, it is as much a piece of art as it is a firearm. The gun is both a rare and extremely well preserved antique that historical firearms collectors will not want to miss out on.