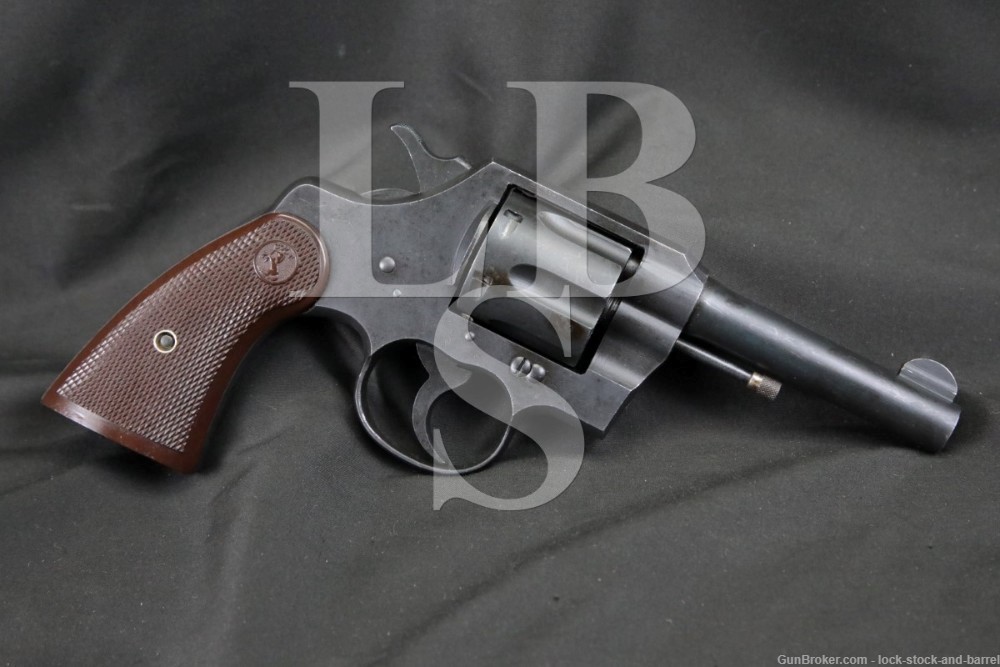 Sights / Optics: The front sight is a rounded blade fixed to the front of the barrel. The rear sight is a square notch in the topstrap.

Stock Configuration & Condition: The grips are two-piece checkered “Coltwood” plastic panels with rampant colts molded into their tops. The grips have minor handling wear with well defined checkering. There are no chips or cracks. Overall, the grips are in Fine-plus condition.

Overall Condition: This revolver retains about 90% of its metal finish. There are scattered minor nicks, scuffs and scratches. The cylinder has some spots of stubborn, dried grease. The cylinder has minor turn-wear. The screw heads are sharp. The markings are clear. Overall, this revolver is in Very Good-plus condition.

Mechanics: The action functions correctly. The cylinder locks up with no play on each chamber with the trigger depressed. The double action trigger is smooth, the single action is crisp. We did not fire this handgun. As with all used firearms, a thorough cleaning may be necessary to meet your maintenance requirements.

Box, Paperwork & Accessories: This revolver comes with a Colt Archives letter which confirms that the revolver shipped in its current configuration to the State of Alabama, Military Department in Kirby Alabama on December 9, 1943 as one of 175 guns of the same type in the shipment.

Our Assessment: As the United States entered World War II, demand for all things military strained even the massive industrial capacity of America. Front-line arms were prioritized for front-line units, but there was also a need to arm law enforcement, guards at factories and other sites with strategic importance, the Maritime Commission and various other non-combat roles which still required arms. To help fill this demand, Colt produced a variation of their Official Police revolver with specifications determined by the US Government. The result was the Commando revolver, roughly equivalent to Smith & Wesson’s Victory model, with 50,617 produced from 1943-1945.

This example is quite interesting, as it was actually purchased for and shipped to the State of Alabama. While collectors frequently refer to these as “Alabama National Guard” Commandos, by December 1943 the Alabama National Guard had been Federalized and most were training in Florida at Camp Blanding. It is most likely that these were actually purchased for the Alabama State Guard, a State Militia activated to replace the duties of the National Guard while they were Federalized. This revolver was one of 175 shipped in December, 1943 and we could not find any records of another shipment. After the war, the A.S.G. was deactivated as their National Guard units were returned to State control and the revolvers, or at least most of them, ended up in the possession of the Alabama National Guard. In 2011, 140 of these revolvers were donated to a local military museum in essentially unissued condition. This example appears to have made its way onto the commercial market earlier than that, or at least saw some use, possibly one of the 35 guns that weren’t kept in unissued condition. It should make a great addition to a Colt or WWII small arms collection, especially if you’re from the Heart of Dixie.