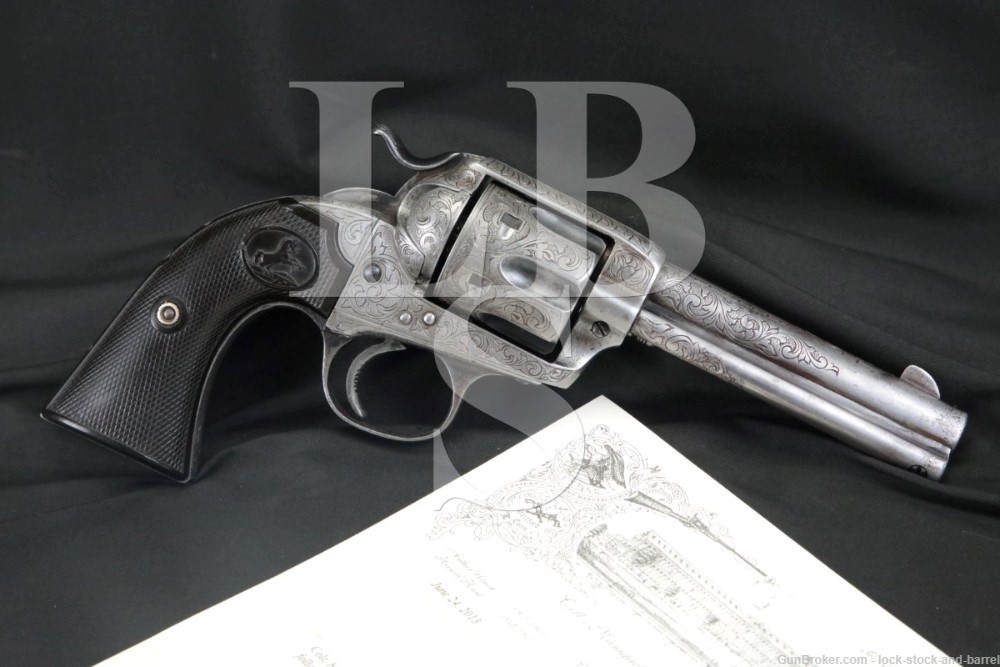 Stock Configuration & Condition: The grips are two piece checkered hard rubber with rampant colts in ovals at their tops. The grips have light handling wear in the checkering. There are some light nicks and scratches, most notable on the bottom. The right panel has a couple of small losses along the rear edge. The checkering is generally well defined, there are a few spots of more notable wear. There are no cracks. Overall, the grips are in Good-Very Good condition.

Type of Finish: There is some Blue finish remaining, but most surfaces have been polished bright.

Finish Originality: Refinished, most parts have been replaced (see Our Assessment).

Bore Condition: The bore is gray. The rifling is worn, but visible. There is scattered light erosion and some pitting in the bore.

Overall Condition: This handgun retains about 10% of its metal finish. Finish remains mostly in protected areas such as the cylinder flutes, inside and around the corners of the trigger guard, and on the hammer. Most other surfaces have been polished bright. The left-front of the barrel appears to have seen polishing since the engraving was applied. There is some scattered minor surface erosion and discoloration from oxidation. The factory markings range from clear to worn and incomplete. The serial markings on the grip frame assembly are not genuine. The engraving is generally crisp, but the edges are soft on the left of the barrel. The screw heads range from sharp to tool marked with strong slots. Overall, this revolver is in about Good condition as assembled.

Mechanics: The cylinder tends to under-rotate. Otherwise, the action functions correctly. The cylinder was made with a removable bushing, but we were not able to remove it. The cylinder locks up with light play on each chamber. We did not fire this handgun. As with all used firearms, a thorough cleaning may be necessary to meet your maintenance requirements.

Box, Paperwork & Accessories: This revolver comes with a Colt Archives letter which indicates that it originally shipped to Wyeth Hardware & Mfg. Company in St. Joseph, Missouri on April 4, 1905 as one of three guns of the same type in the shipment. It originally shipped as a .41 Colt with a 4 3/4″ barrel. The letter does not indicate that this revolver shipped as a Bisley model.

Our Assessment: This is an interesting customized 1st Generation Single Action Army revolver. Originally shipped as a .41 Colt in 1905, the frame has since been assembled as a .32-20 Bisley Model with that model’s distinctive grip frame and wide, low hammer spur. In addition to this customization, the revolver has had attractive engraving applied and most surfaces have been polished bright. This would be a great candidate for restoration