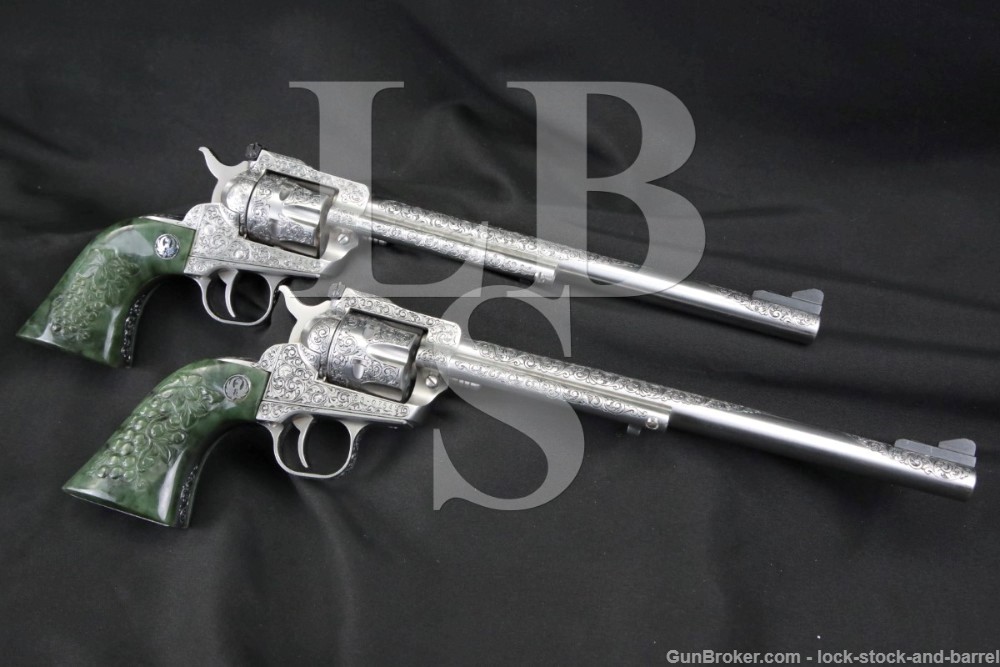 Sights/Optics (Both): The front sight is a steel blade set into the barrel. The rear sight is a square-notch integral to the top strap.

Type of Finish (Both): Stainless

Bore Condition (Both): The bores are bright, the rifling is sharp, there is no erosion, but some minor stubborn fouling is apparent in both.

Overall Condition (Both): The portions of metal without engraving, such as the undersides of the barrels, and certain parts of the cylinders have minor nicks and scuffs scattered throughout along with a few minor draglines—this wear is notable mostly on the underside of each barrel. Each cylinder has a distinct, though minor, turn line. Pins are unmarred, and all markings are clear. Overall, these 98% revolvers rate in Fine-plus condition, as customized.

Mechanics (Both): The actions function correctly. Cylinders lock with minor play at each stop. Both revolvers had action jobs performed by Lassiter, a famous SASS member. We did not fire these revolvers. As with all used firearms, thorough cleaning may be necessary to meet your maintenance standards.

Box, Paperwork, and Accessories (Both): None. Please note that while these are convertible models, the WMR cylinders are NOT included.

Our Assessment: From an NRA.com article looking back at the Single-Six: “Only a relative handful of rank, old cowboy types still clung to the thumb-buster, and most of them couldn’t scrape together enough cash to buy a new gun. Besides, the tooling to build single-action revolvers was worn out and obsolete. It made absolutely no business sense whatsoever to continue to make single-action revolvers.” In most Ruger stories, this is right about when Bill Ruger says, “Hold my Bahama Mama,” and then proceeds to force it into making sense—for everyone, for decades. Mix Bill’s intense salesmanship with the rise in popularity of westerns on the then-new television, add a dash of profit made selling the venerable Standard Pistol, and you have the Single-Six revolver, which has been in production continuously since 1953.

These consecutive examples are from 1974, “New Model” versions, and rare to boot. The 9 1/2” stainless version was produced only in 1974, and while we can’t be exactly sure of how many, the number can’t be higher than a few thousand, given overall production did not exceed 30,000 for all versions of the Single-Six in that year. The original owner customized this with extensive engraving and grips. Wear is minimal, the bores are bright, and mechanically, the pistols are without issues. Good luck and happy bidding!