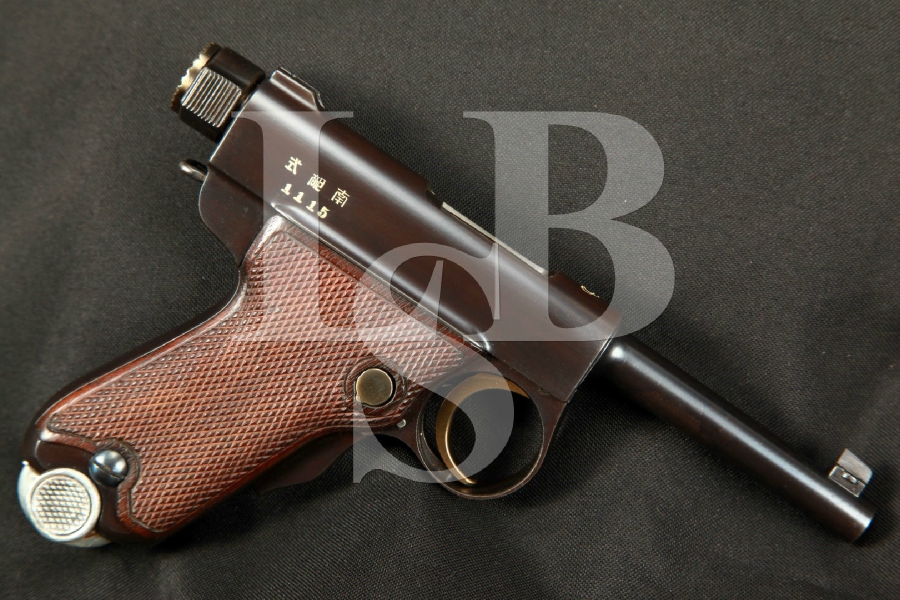 LSB#: 150624CM06
Make: Tokyo Arsenal in Koishikawa
Model: The official Japanese model for this pistol was Type Nambu, but it has been referred to as the Baby Nambu by the West for years.
Serial Number: 1115
Year of Manufacture: There were about 6500 of these guns produced between 1909 and 1930, so we suspect this gun was made around 1913 and certainly no later than the end of WWI.
Caliber: 7x20mm Nambu
Action Type: Single Action, Semi-Automatic with 7-Round Removable Magazine
Markings: The right side of the frame is marked with the Japanese symbols for “Nambu” and “Type”, as read from right to left, over the serial number “1115”. The top of the chamber ring is marked with the four Cannonball symbol for the Tokyo Arsenal in Koishikawa. The rear of the slide is knurled to resemble a chrysanthemum. The underside of the bolt and the front face of the grasping knob are marked “1115”. There is a small Japanese character stamped in the center of the front strap below the grip safety and another on the bottom of the front strap.
Barrel Length: 3 3/8”
Sights / Optics: The front sight is a Patridge style blade fixed dovetailed into a base on the barrel. The sight resembles an inverted “V” when viewed from the rear. The rear sight is a “V” groove in the top of the frame.
Stock Configuration & Condition: The grips are checkered brown walnut. The checkering shows light wear without mars. There are no marks in the smooth borders that we could find. The grips rate in about Fine to Excellent condition.
Type of Finish: Blue, the mum, trigger and magazine release have a straw colored finish.
Finish Originality: The pistol has been professionally restored.
Bore Condition: The bore is bright with extremely shallow rifling. It is almost like someone polished the bore with a drill motor and an abrasive compound. There is no erosion.
Overall Condition: This handgun retains about 99+% of its current metal finish. There are no marks in the finish that we could find. There are, however, a very few tiny spots of pitting under the finish on the barrel at the right side of the front sight. The knurling on the mum shows medium wear and the knurling on the magazine release is sharp to the touch with very light wear around the outside edge. The serrations on the grasping knob shows extremely light wear with a few tiny marks in the edges of the serrations on the left side. The grip screws are sharp and the markings are clear: those on the right side of the frame and the chamber ring have been filled with white paint. Overall, this handgun rates in about Fine condition as refinished.
Mechanics: The single action trigger is very light but has a fair amount of creep. It has a grip safety on the front strap. The action functions correctly. We did not fire this handgun.
Box, Paperwork & Accessories: This pistol comes with a total of one magazine with an aluminum bottom piece. The rear surface is marked “1115” at the bottom. The magazine has been nickel plated and shows only light wear except for two small spots at the bottom of the front surface where the plating has chipped off. The bottom piece shows several dings on its edges as well as a few dings and nicks in the rest of its surface. . Overall, the magazine is in about Very Good overall condition.
Our Assessment: The “Type Nambu” pistol, generally referred to as the Baby Nambu, was a three-quarter sized scaled-down version of the Model 1902 Modified (Papa Nambu.) They were made from 1909 to about 1930 by the Tokyo Arsenal at Koishikawa. They were never adopted by any branch of the armed forces but were sold to officers through officer stores. According to Wikipedia.org, the pistols weren’t all that popular because they were twice the price of a comparable imported pistol. The price for a Type Nambu pistol was 180 yen while a 2nd Lieutenant’s monthly salary was only 70 yen. This pistol has been professionally restored and retains about 99+% of its current finish. It shows only a tiny spot of thinning at the bottom of the front strap and a few tiny marks under the finish. The grips are checkered walnut that show light wear in the checkering with no noticeable mars. The bore has been polished bright, but the rifling is extremely shallow. The markings are all clear and you have to look very close to see that the finish isn’t original – especially when your eyes are drawn to the straw colored trigger and mum. The pistol is correctly marked and the parts all have matching numbers, even the magazine. The mum at the back of the bolt is intact but shows moderate wear at the center. This pistol is perfect for a collector of Japanese firearms. It would look great along-side its “Grandpa”, “Papa”, Type 14 and Type 94 cousins.