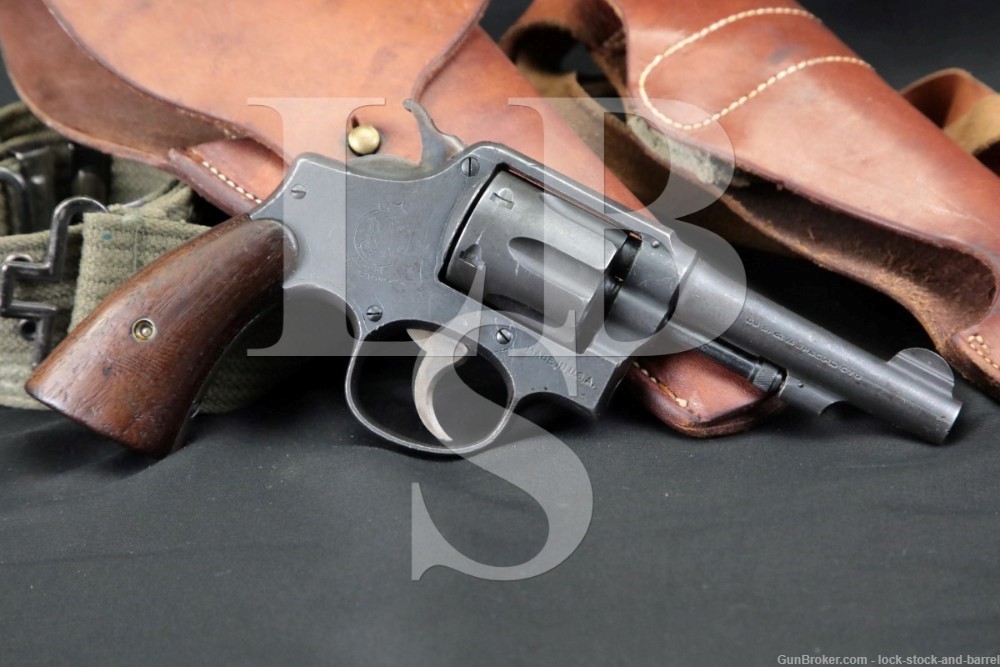 Markings: The left side of the barrel is marked “SMITH & WESSON”, the top is marked “SMITH & WESSON SPRINGFIELD MASS. U.S.A. / PATENTED FEB.6.06. SEPT.14.09. DEC.29.14”, the right is marked “38 S. & W. SPECIAL CTG”. The butt of the grip frame, barrel flat, rear of the cylinder, front of the ejector star (no letter prefix), and rear flat of the yoke (no letter prefix) are marked with matching serial number “V91059”. The side plate has S&W’s monogram logo, the right side of the frame is marked “MADE IN U.S.A.”. The topstrap is marked “U.S. NAVY”. There are inspection marks on the crane, its cut, and the sides of the grip frame. The inside of the right grip panel is stamped with a number that does not correlate to the serial number. The left side of the frame is marked “PROPERTY OF / U.S. NAVY”. The butt of the right grip panel is marked “17”.

Bore Condition: The bore is bright and the rifling is sharp. There is no erosion but there are areas of stubborn lead fouling.

Overall Condition: This handgun retains about 60% of its metal finish. The lanyard ring is missing from the butt of the grip frame. There is finish loss on the edges. There is thinning throughout. There are scattered areas of discoloration from previous oxidation. There are some scattered nicks and scuffs. There are a few dings into the metal. The backstrap has finish loss and it appears that aftermarket markings were intentionally removed. There is a turn line on the cylinder. There are some scattered handling marks. The screwheads are mostly sharp. The main markings clear, some of the smaller markings are light. Overall, this revolver is in about Very Good condition.

Box, Paperwork & Accessories: Included is a replacement lanyard pin, a green canvas belt with leather flap holster, and an A.H. Hardy holster rig. The rig is marked with company markings and a previous owner has marked it “LIEUT / J.C. STROBEL / USNR”.

Our Assessment: At the beginning of WWII S&W began producing their M&P revolver for military use. They added a “V” for Victory to the serial number; this iteration thus became known as the Victory Model. As we entered the fray, we were producing them for U.S. forces as well as for our allies. Victory model revolvers were standard issue for Naval and Marine aviators as well as guards back in the States at defense installations and factories supporting the war effort. While we did get the Victory and win WWII, the revolvers went beyond the call of duty and were used long after the conclusion on the conflict. Continuing after WWII, regulations prohibited the 1911 and 1911A1 from being carried with a loaded chamber, this made racking the slide a difficult task for aviators as well as K9 handlers so revolvers were the clear choice. The preferred issue of revolvers for aviators lasted quite a while, and Army helicopter pilots even used Victory Models until they replaced them with modern double action 9mm semi-autos, a testament to the S&W design. This is a nice example of a revolver that has made its contribution to keeping the world free and will be a nice addition to a WWII or U.S. martial collection. This one is a Navy contract revolver and has Navy markings on the topstrap and frame. This one will be a nice addition to a WWII collection and is still a K-frame .38, perhaps the benchmark for a .38 duty or defense revolver and will certainly serve faithfully for lifetimes to come. Please see our photos and good luck!