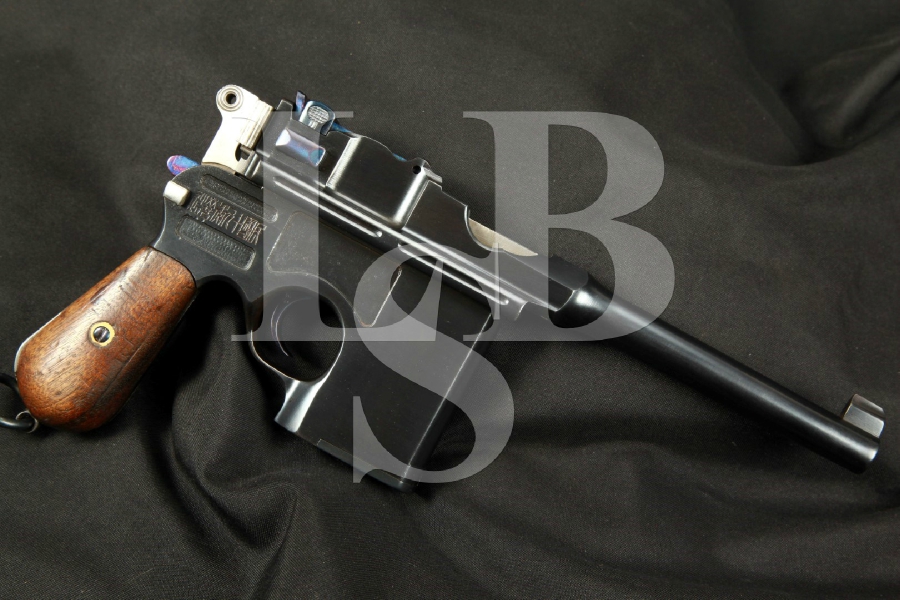 LSB#: 150624CM09
Make: Shansei Arsenal, China
Model: 1896 Broomhandle Mauser
Serial Number: 4529
Year of Manufacture: 1930 (http://www.northwest-denture.com/mauser1896/ChineseVariations.html)
Caliber: .45 ACP
Action Type: Single Action, Semi–Automatic with Internal Magazine
Markings: The left shoulder at the chamber and the magazine follower are marked “4529”. The top rear of the bolt is marked “4529” and with a starburst proof. The back of the hammer and the top of the bolt stop are marked “529”, and the back of the frame and the lock frame are marked “4529”. There are Chinese characters on both sides of the frame. The characters on the right side indicate the model and the year it was made: it was made in the 19th year of the reign of the Chinese Nationalists (year one being 1911) or 1930.
Barrel Length: 5 3/8”
Sights / Optics: The pistol is mounted with a “V” notch rear tangent sight with markings from “50-1000”. The front sight is a fixed inverted “V” blade.
Stock Configuration & Condition: The grips are grooved dark walnut. The left grip is dark with oil staining and the grooves have been worn smooth on both grips. There are two deep compression marks at the bottom rear of the left grip along with several shallower nicks and bruises. There are also a few shallow compression marks in the right grip. No chips or cracks were noted. The grips rate in about Good overall condition.
Type of Finish: Blue, the extractor has a plum colored patina, the hammer, bolt and lock frame are in-the-white. The safety and the rear sight slider have a fire blue finish.
Finish Originality: The finish has been professionally restored.
Bore Condition: The bore is gray and the rifling shows moderate wear. There is light erosion in the lands and grooves the length of the bore.
Overall Condition: This pistol retains about 99+% of its current metal finish. There is a small spot of thinning at the bottom of the backstrap. There are also a few tiny marks under the finish scattered over the pistol, with a few tiny spots of pitting under the finish on the left side of the barrel extension and the right side of the frame at the magazine. The serrations on the hammer, safety and bolt, and the knurling on the rear sight slider show light wear. The grip screw is sharp. The markings are clear but flat. Overall, this pistol rates in Fine condition.
Mechanics: The rear of the frame is slotted for a shoulder stock. The action functions correctly, but care must be taken to push the safety all the way forwards. If it is not all the way forwards and the trigger is pulled, the sear releases, and then the hammer falls when the safety is pulled back to the “FIRE” position. We did not fire this pistol.
Box, Paperwork & Accessories: None
Our Assessment: The Broomhandle Model 1896 Mauser is certainly an interesting looking firearm. During the Chinese civil war in the 1920s and 1930s, international arms embargoes made rifles difficult to acquire – which led to a lot of popularity for pistols with shoulder stocks. The C96 “Broomhandle” Mauser in particular was popular and it was copied by a number of Spanish firms for sale in China as well (in fact, the fully automatic Schnellfeuer version was initially made by Mauser specifically for Chinese sale.) The .45 ACP cartridge also became popular through its use in Thompson submachine guns and the natural result was a Chinese arsenal designing and producing a C96 Mauser pistol scaled up to use .45 ACP ammunition. One popular reason for this is so the bodyguards of the warlords could have a common cartridge for use in both their pistols and in their Thompsons. Approximately 8000 C96 copies were made at the Shansei Arsenal from 1928-1931. This Shansei .45 Caliber C96 was made in 1930 and its finish has been restored. It has about 99+% of its current finish remaining, with only a small spot of thinning at the bottom of the backstrap. There are a few tiny marks and spots of pitting under the finish. The grips are grooved walnut, with the grooves worn smooth on both grips and the oil stained left grip is noticeably darker than the right. The bore is gray with moderate wear in the rifling. There is also light erosion the length of the bore. Collecting C96 Mausers can be quite an undertaking, as there are many variants (large and small ring hammers, etc.) Still, no C96 collection would be complete without Spanish and Chinese copies included, at least the ones made by major gun manufacturers, or in arsenals such as the one this pistol was made in. One has to look carefully to see that the finish was restored – it was certainly done by a professional. The icing on the cake is that all of the numbers on the gun match, even to the magazine follower.