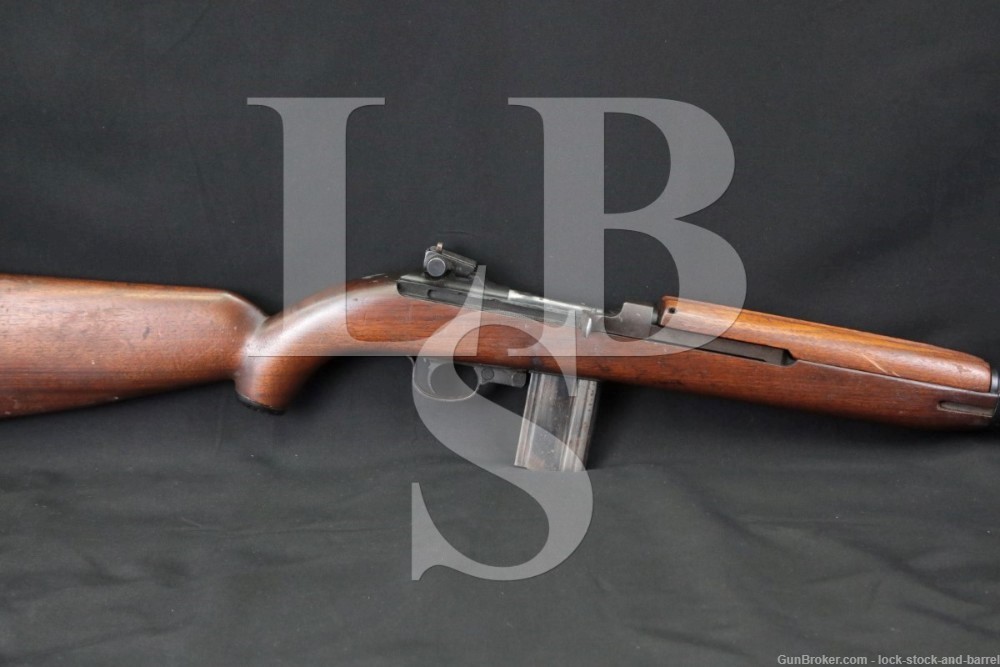 Sights / Optics: The front sight wings have been removed and the bladed post has been shaped. The rear sight is an adjustable Type III aperture assembly.

Stock Configuration & Condition: The stocks grip has been shaped and a grip base has been added. The hardwood stock has a pistol grip, Type IA barrel band with sling loop, sling well, sling pass through, and a metal buttplate. The buttpate shows scrapes & light surface erosion.  The wood shows scattered scrapes and scratches. The interior of the sling well has had wood removed. The LOP measures 13 1/4 inches from the front of the trigger to the back of the buttplate. The stock rates in about Very Good overall condition as refurbished.

Bore Condition: The muzzle and grooves are semi bright. There is fouling and intermittent erosion at the muzzle and in the grooves. The bore shows an M.E. of 1.8.

Overall Condition: This rifle retains about 70% of its metal finish. The front sight has been treated with cold blue. The trigger group shows light surface erosion under the wood. The metal shows scrapes, small scratches and light surface erosion. The receiver and bolt show operational wear.  Most of the markings are well defined. The barrel and front sight markings are partially faded. Overall, this rifle rates in about Good to Very Good condition.

Box, Paperwork & Accessories: The rifle comes with a 15 round magazine that shows surface erosion and thinning. It appears to function correctly.
The 15 round magazine is not available to residents of California or any other state with magazine capacity restrictions.

This IBM M1 Carbine was made back in 1944. The receiver was subcontracted by Auto-Ordnance and is marked “AO” below the serial number. This M1 carbine has been rebuilt. The front sight and grip have been modified. The finish has some issues but should clean up some. This M1 Carbine uses lots of IBM parts. The stock is not made by IBM but an IBM stock can be found on-line or at a gun show. Good luck.