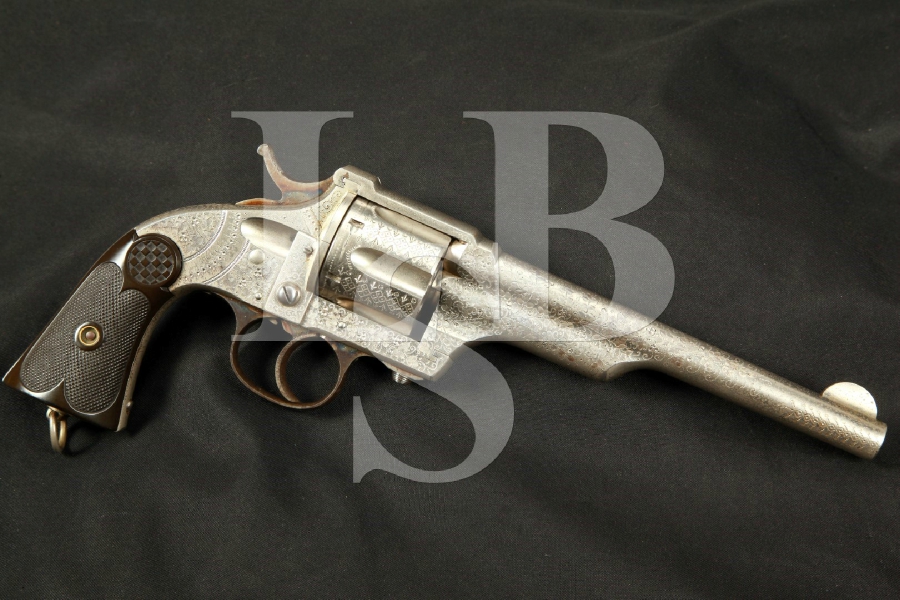 LSB#: 150629DW01
Make: Merwin Hulbert & Company (as made by Hopkins & Allen)
Model: 3rd Model Double Action Army Revolver
Serial Number: 20402
Year of Manufacture: 1883-1887
Caliber: .44-40 Winchester, .44 WCF
Action Type: Single and Double Action with Pivoting Barrel Assembly
. Markings: The top of the barrel is marked “MERWIN HULBERT & Co. New York, U.S.A. Pat. Apr. 17.77. June 15.80. Mar. 14. 82. Jan. 9. 83.” The left side of the barrel is marked “THE HOPKINS & ALLEN Manufacturing Co. Norwich, Conn. U.S.A.” The left side of the frame is marked “CALIBRE / WINCHESTER” and “1873”. The barrel assembly, rear cylinder face and grip frame are marked “3467”. The butt is marked “20402”.
Barrel Length: 7” Round
Sights / Optics: The front sight is a half round blade integral to the barrel. The rear sight is a “V” groove milled into the top strap.
Stock Configuration & Condition: The two piece checkered hard rubber grips exhibit minor marks with one small compression mark on the edge of the left panel butt. Four checkering diamonds are deformed. The grips rate in about Excellent overall condition.
Type of Finish: Nickel
Finish Originality: Factory Original
Bore Condition: The bore is bright and the rifling is sharp. There is a small patch of erosion in the bore.
Overall Condition: This handgun retains about 85% of its metal finish. A coating of freckling is visible on the barrel and frame, with patches of finish loss on the grip frame and butt. Drag lines are present on the cylinder with freckling apparent in the flutes and patches of finish loss on the forward face. The case colored trigger guard has developed a dark patina with traces of case coloring remaining. A lanyard ring is fastened to the butt. The barrel, frame and cylinder are factory engraved with an intricate ivy pattern and a picture of a dog resting in the grass. The engraving style on Merwin Hulbert pistols was advertised as “Intaglio Engraving” which is also known as “Punch Dot” engraving. The engraving is sharp with some wear evident near the muzzle. The screw heads are sharp. The markings are shallow. Overall, this handgun rates in about Excellent condition.
Mechanics: The action functions correctly with only mild play in the cylinder lock up. The Merwin, Hulbert mechanism was unique. Moving a slide lock on the underside of the frame allows the barrel assembly to rotate 90 degrees and move forward, which ejects the spent rounds while retaining the unfired cartridges. The assembly is quickly sucked back into place and the pistol is loaded via the loading gate. The loading gate is dovetailed to the frame and is fused into place by 100 years of dried oil. To break down the revolver, the same slide lock is moved to unlock the barrel assembly so it may be rotated, then a lever on the barrel assembly is pushed, allowing the barrel assembly and cylinder to slip off the cylinder pin. With a little practice, the revolver can be broken down in about two seconds, with reassembly taking about the same amount of time. We did not fire this handgun. As with all previously owned firearms, a thorough cleaning may be necessary to meet your maintenance standards.
Box, Paperwork & Accessories: None
Our Assessment: This is a spectacular Merwin, Hulbert & Company 3rd Model Double Action Army revolver. These pistols were revered for their clever mechanics and splendid craftsmanship. They were built like tanks and the unique twist action made them easy and fast to load. They were quite expensive and thus not as common as Colt’s or Remington’s, but they were carried by luminaries such as Jesse James. Merwin, Hulbert and Co. was primarily a sporting goods retailer, selling their own designs and also representing many other manufactures’ products. Merwin had a knack for identifying interesting items and in 1876 they began manufacturing their own line of pistols a the Hopkins and Allen factory, of which they owned a fifty percent share. This is a Third Model Army double action revolver in Excellent condition, retaining about 85% of its nickel finish and displaying lovely flower and ivy engraving. Merwin, Hulbert utilized a faster and easier engraving technique which was much more cost effective than the incised engravings used by other arms companies. Known as “punch dot” engraving, referred to in Merwin Hulbert catalogs as “Intaglio Engraving”, scroll work, borders and designs such as flowers were created with a pattern of tiny dots made by a punch-like tool tapped with an engraver’s hammer. The result was striking and unique while costing much less than incised engraving. The action works flawlessly, except that the loading gate is stuck in the closed position. The grips are in Excellent condition. Merwin, Hulbert & Company revolvers have become an object of collectors over the past few years and the demand for them has been increasing. This is a Excellent example of a deluxe revolver from the Old West.