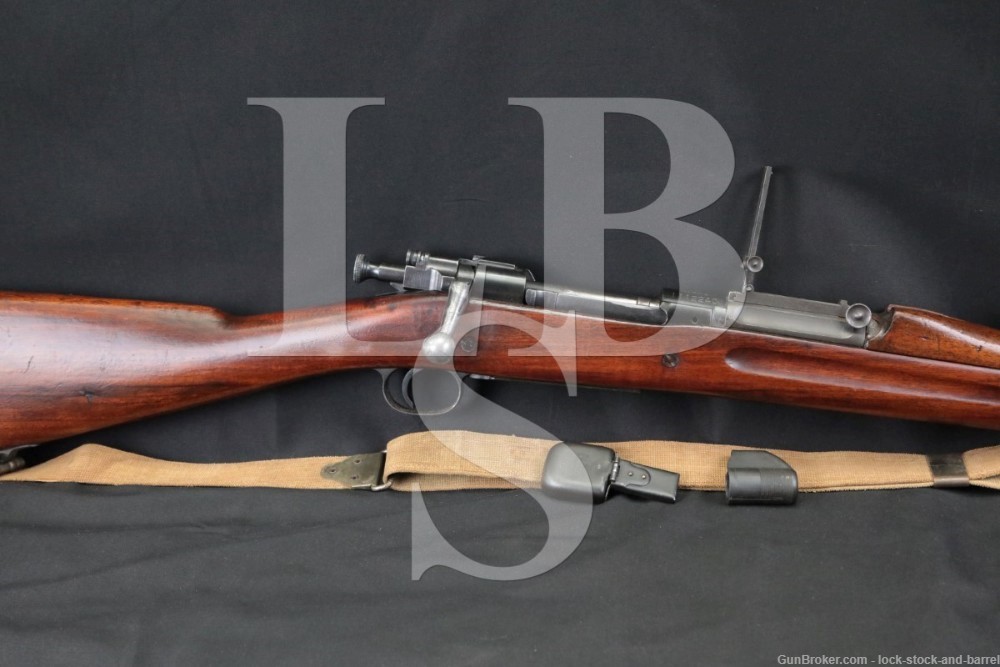 Model: 1903 Mark I. The Mark I Rifle was made with an ejection port cutout on the receiver. The ejection port is needed for the Pedersen Device.

Sights / Optics: The front sight is a pinned blade set atop a raised base. The rear sight is a “U” notched blade attached to a fully adjustable sight ladder marked from “3-27”. When flipped up separate notches and an aperture on the ladder can be used for sighting. Metal sight protectors are installed.

Stock Configuration & Condition: The two piece hardwood stock has a straight grip, metal nosecap with bayonet lug, stacking loop, barrel band, 2 sling loops, 2 through bolts, and a metal buttplate with hinged door for storage. The buttplate and stock hardware show discoloration from oxidation and scratches. The buttpalte also shows light surface erosion. The wood shows several scrapes, scratches and compression marks. Many of these marks have been finished over.  The most prominent marks are on the handguard. The LOP measures 12 3/4 inches from the front of the trigger to the back of the buttplate. The stock rates in about Very Good Plus overall condition as refinished.

Overall Condition: This rifle retains about 92% of its metal finish as refinished. The metal shows scrapes and small scratches. The barrel and receiver have been touched up with black gun paint. The gun paint on the receiver has surface erosion bleeding through causing discoloration. The bottom metal shows light oxidation. The screw heads show use. The metal markings are well defined. The markings on the wood are faded.  Overall, this rifle rates in about Very Good Plus condition as refinished.

Box, Paperwork & Accessories: The rifle has a web sling attached. The rifle has sight protectors installed. There is a plastic oiler tube stored in the butt.

This collectible Springfield Armory Model 1903 Mark I Rifle was made back in 1919 so it was around for all of WWII. It is over 100 years old and is historically significant. The rifle has clear Springfield markings on the receiver and barrel as well as a deep “MARK I” designation on the receiver. The rifle comes with a web sling and sight protectors.  This 1903 Mark I is worth adding to your collection.  Good luck.