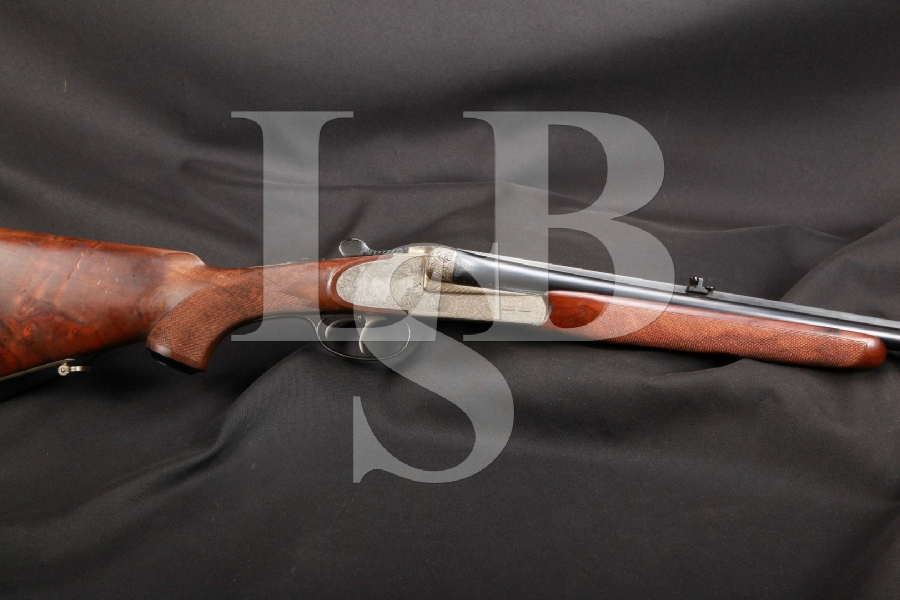 Markings: The top of the barrel rib is marked “Genossenschaft der Buchsenmachermeister – Ferlach – Austria”. The undersides of both barrels are marked “BOHLER ANTINIT (NG)” and near their water tables with two proof marks we don’t recognize (The left half of one proof is the Ferlach Preliminary 1st Black Powder Proof). The underside of the right barrel is also marked with 2 inspection marks, “JH” in an oval and “1808”. The barrel flats are marked “9.3/74R”, “NPF” (Final Smokeless Proof) and with an Eagle proof (Ferlach Final Black Powder Proof). The left barrel flat is also marked with the date code “2523.67”. The left water table is marked “1808”. The right barrel flat is marked with the date code “2523.67”, “NPF” and an Eagle.

Sights / Optics: The front sight is a brass beaded blade fixed to the barrel rib. The rear sight is a 3 leaf express sight. The middle leaf is fixed while the front and back leafs are folding. In addition to being finely checkered, the rear face of the front leaf is marked “300”, the middle leaf “100” and the rear leaf “200”. The top of the barrel rib is finely serrated to reduce glare.

Stock Configuration & Condition: The stocks are checkered fancy burled walnut with pistol grip, Monte Carlo comb and cheekpiece. There is a vented brown recoil pad on the butt with white and black spacers marked “WHITE LINE / PACHMAYR”. There is a sling swivel in the belly and a folding trapdoor just behind the sling swivel that when open reveals three holes for storage of spare ammunition.There is a 2nd sling swivel mounted on the bottom of the barrels. The grip has a black plastic cap held with an engraved screw. The buttstock shows several compression marks on the right side of the comb and several very shallow compression marks in the cheekpiece. There are also a few tiny compression marks on the bottom edge of the cheekpiece. The forend shows a few light handling marks with a minor compression mark near its top left edge. The checkering shows light wear with a small mar near the back edge of the checkering on the left side of the grip. The wood to metal fit is excellent. The LOP measures 13 9//16” front the front face of the forward trigger and 12 7/8” from the rear trigger to the back of the recoil pad. The recoil pad shows negligible wear but is becoming hard at the heel and toe with only a small amount of give on its edges. The pad is in about Very Good condition. The stocks rate in about Fine overall condition.

Bore Condition: The bore is bright and the rifling shows light wear. There is no erosion.

Overall Condition: This rifle retains about 96% of its metal finish. There is thinning at the front of the barrels and on the top of the front sight with spots of surface loss on the outside of the right barrel at the front sights. There are also several light marks and a few marks through the finish on the barrels from the muzzle to the forend. The right barrel shows a tiny spot of light pinprick surface erosion about 3” behind the rear sight and there is a small spot of discoloration on the upper tang just in front of the safety. The screw heads are sharp and the markings are clear. Overall, this rifle rates in about Fine to Excellent condition.

Mechanics: The action functions correctly. This rifle has a Kersten cross-bolt locking mechanism on the receiver which employs two ears insert into the top of the receiver unlike the single ear used on Greener mechanism. We have not fired this rifle.

Our Assessment: The city of Ferlach is rich in gun making history. In the 1700’s under Empress Maria Theresia, the production was mainly for the military, and the entire army was equipped with Ferlacher rifles. When the military production was moved to Steyr at the beginning of the 19th century, the gun makers began to specialize in the manufacture commercial hunting weapons.They are as beautiful as museum pieces when they leave the workshop, but destined for practical use. Renowned for their precision, weapons made in Ferlach make the heart of every collector beat faster and are coveted by hunters all over the world. Every hunting rifle manufactured in Ferlach is unique, tailor-made to the specifications of the client. They select the calibre, lock mechanism or barrel combinations, determine the ornamental engraving for the metal plates on the stock, and choose the solid wood. Then the client is measured for barrel length. It is fascinating to witness the combination of many highly specialized crafts, which only survive through the art of gunsmithing. The 9.3x74R cartridge was designed around 1900 for large European game like moose, brown bear and polar bear, and remains a popular cartridge in Africa, The definitive load for the 9.3x74R is a 286-grain bullet with a muzzle velocity of about 2360 fps, sedate by American standards but proven over time to be about optimum for penetrating and killing tough aggressive game. A properly constructed 286-grain 9.3mm bullet driven at that velocity will not expand prematurely or blow up on you, and will very rarely fail to reach its vital objective inside any animal on earth when the shooter does his part. In some African countries with minimum bore requirements for hunting dangerous game (usual7y .375” or .40”), the 9.3x74R is often listed as an allowed exception. This is really beautiful rifle, so please see our pictures. It is a double rifle in 9.3x74R with blued barrel and in-the-white receiver. The receiver, trigger guard, barrel latch, forend latch and the cover over the ammunition compartment in the belly of the buttstock are all elaborately scroll engraved, with game scenes on the receiver and ammunition cover. The wood is checkered fancy burled walnut with Monte Carlo comb and cheekpiece. The rifle is in Fine to Excellent condition with about 96% of its original finish remaining. There is thinning at the front of the barrel with handling marks down the length of both barrels and a tiny spot of light erosion on the right barrel behind the rear sight. The wood shows several shallow compression marks on both sides of the buttstock and light wear in the checkering with a single mar on the left side of the pistol grip checkering. The bores are bright with light wear and no erosion. What a fine big-game rifle this will make. If you can afford to go on Safari, you might as well do it with a rifle that is going to be as reliable as it is good looking. Of course, there are those who like to collect beautiful well-made rifles like this one just to look at them, and they will also be interested in this rifle.