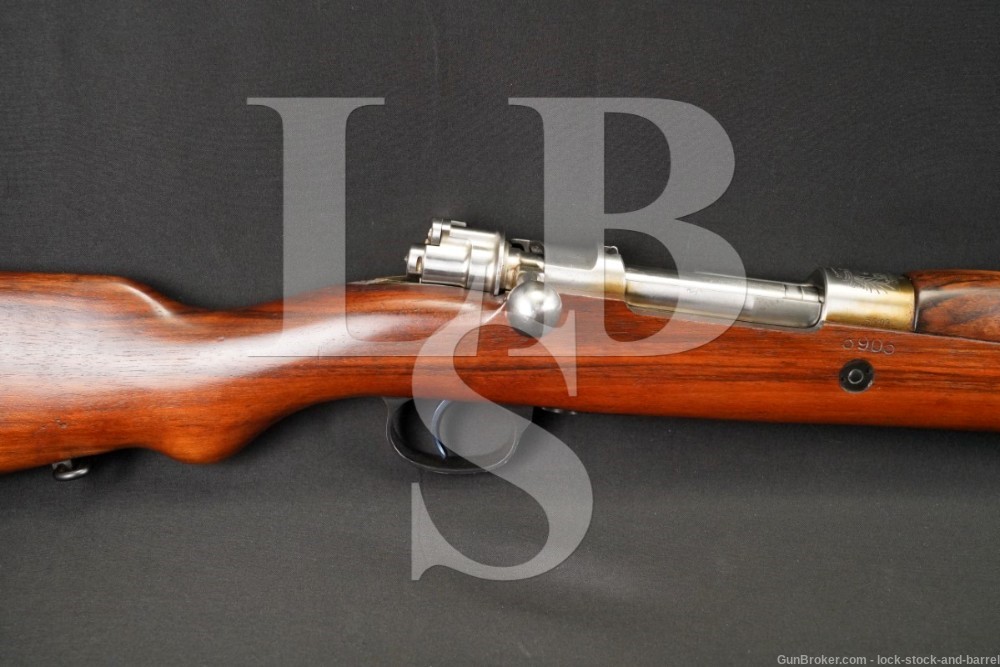 Sights / Optics: The front sight is an inverted “V” post set atop a ramped base. The rear sight is a “V” notched sliding sight escalator marked from “2-20”

Stock Configuration & Condition: The two piece hardwood stock has a pistol grip, metal nose cap with bayonet lug, hole for the included cleaning rod, barrel band with sling loop, sling loop under the butt, through bolt and a metal buttplate. The buttplate shows scrapes & light discoloration. The wood shows scrapes, scratches and compression marks. The most prominent marks are on the bottom of the butt.  The LOP measures 13 1/4 inches from the front of the trigger to the back of the buttplate. The stock rates in about Very Good Plus to Fine overall condition.

Type of Finish: Blue. Receiver and Bolt “ In the White”

Overall Condition: This rifle retains about 97% of its metal finish. The metal shows scuffs, light scrapes and handling marks. The bottom metal also shows scratches. The receiver has excess wood finish on it. The screw heads show light use. Most of the markings are deep. Overall, this rifle rates in about Very Good condition.
It will rate higher once the bolt assembly issues are addressed.

Mechanics: The rear of the bolt assembly does not lock in place. It tends to rotate so that the action cannot be cycled. The safety is stuck in the “FIRE” position.
The action functions otherwise. We have not fired this rifle. As with all previously owned firearms, a thorough cleaning may be necessary to meet your maintenance standards.

Box, Paperwork & Accessories: The rifle comes with a muzzle cover.

Our Assessment: This Venezuelan Mauser is an FN 24/30 Short Rifle. It was made by Fabrique Nationale of Belgium as a contract rifle for Venezuela sometime between 1934 and 1935. The rifle has nice markings on the receiver including a large Venezuelan crest. The rifle has a good bore that will be ringing steel out at the range…after the bolt assembly and safety are worked on. Good luck.