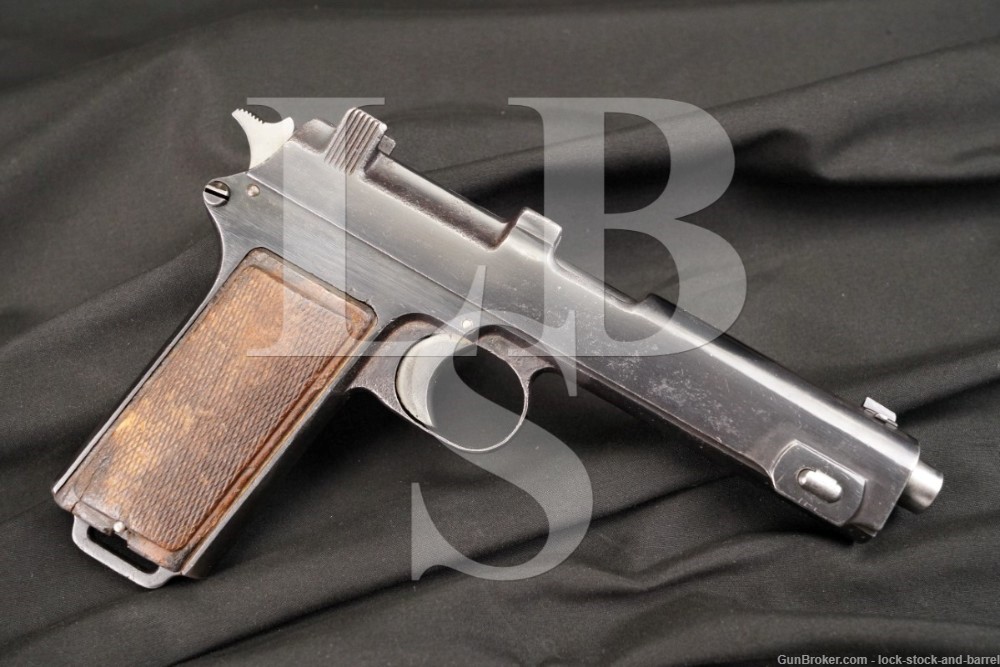 Stock Configuration & Condition/ Grip: The grip panels are two-piece checkered wood with smooth borders. The grips have slight-moderate handling marks, nicks and scuffs. Notably, there is a small chip under the screwhead on the left panel, light wear along the left panels leading edges and a small chip on the rear smooth portion of the left panel. Also, the right panel has a small chip at the bottom under the screw slot, a light crack on the lower left portion of the left panel, a light nick above the crack and a few scattered nicks. The checkering remains mostly sharp, but there are scattered patches which have gone flat. Overall, the grip panels are in Good condition.

Overall Condition: The pistol retains about 75% of its metal finish. There are light-moderate handling marks, nicks and scuffs on the gun’s metal surfaces. Notably, there is finish loss along the leading edges, scattered patches of light pitting and some scattered patches of light surface oxidation. The markings remain clear. The screwheads have light tool marks but they remain serviceable. Overall, the pistol is in Very Good condition.

Mechanics: The action functions correctly. The single action trigger is crisp. The slide to frame fit has only barely palpable play. We have not fired this pistol. As with all used firearms, a thorough cleaning may be necessary to meet your maintenance requirements.

Our Assessment: This is a Steyr manufactured Steyr-Hahn Model 1912 semi-automatic pistol made for service with the Austro Hungarian Army during WWI. The Austro-Hungarian role in WWI was significant, the war began as a result of the Austrian Archduke Franz Ferdinand’s assasination in 1914. Gavrilo Princep, a Yugoslavian nationalist of Serbian origin, sought to liberate Sarajevo from Austro-Hungary by assassinating Franz Ferdinand and his wife on June 28th, 1914. Princep was arrested by the Austro-Hungarian authorities who put him on trial where he plainly stated “I am a Yugoslav nationalist”, despite this the Austro Hungarians portrayed the event as an act of Serbian state sponsored terrorism. Serbia was presented with a harsh ultimatum by Austro-Hungary on July 23 and only given 48 hours to reply. Diplomatic wrangling played out for the next five days before Austro-Hunagry declared war on Serbia. Austro-Hungary’s ally Germany exacerbated the crisis by preemptively declaring war on Russia, France and Belgium. Britain responded by declaring war on Germany. Soon thereafter Austro-Hungary and the Ottoman Empire followed Germany’s lead; it is generally assumed that Germany and Austro-Hungary were looking for a pretext to start the conflict.

The Austro-Hungarian Army’s war effort was mainly focused on fighting against Italy which switched sides in 1915 (Italy had initially joined forces with Germany and Austro-Hungary), the war against Russia and several conflicts in Eastern Europe including the poorly executed invasion of Serbia. The Austro-Hungarian forces were poorly led and faced repeated failures in the field, often having to rely on German support to reverse their losses. The war had ended in a catastrophic defeat for Austro-Hunagry, with the Hapsburg dynasty collapsing in the aftermath of the conflict. The war was also very costly for the Austro-Hungarians,  well over a million men were lost during the conflict..

The Steyr-Hahn Model 1912 was a popular sidearm in the Austro-Hungarian Army, it was durable and well-suited to extreme conditions. This particular handgun’s slide was made in 1914 and the serial suffix on the frame also appears to be from 1914 (although they appear to both be made in 1914, the slide was force matched to the frame), the year WWI broke out. The pistol has wear consistent with a WWI-era weapon (it was made 108 years ago afterall), but the gun remains a well preserved and is still both an ergonomic and mechanically sound option. The markings remain clear and the gun has a unique aesthetic. This is a great option for fans of historical firearms and WWI history aficionados. Good luck on your bid!