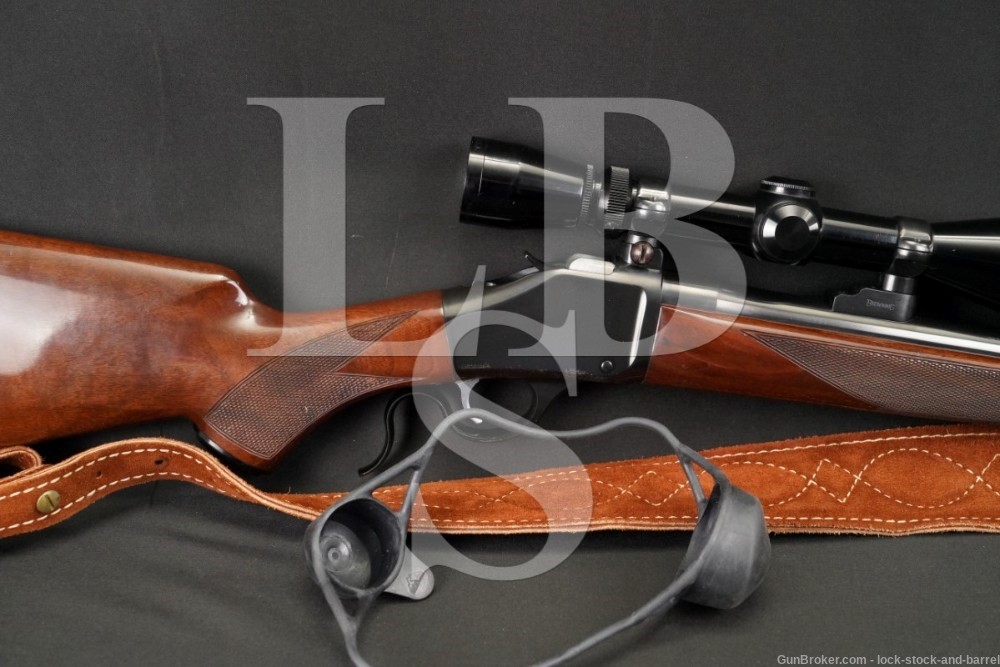 Make: Browning, made in Japan by Miroku

Year of Manufacture: 1975. The date code numbers were occasionally reversed during early Miroku production, “57” is a reversed “75” in the serial number.

Sights / Optics: There are two-piece Browning bases installed on the chamber ring and the rear of the barrel with Leupold-style rings holding a Leupold Vari-X IIc with 4-12x magnification and a duplex reticle. The scope has clear glass with only minor marks, in about Fine-Plus condition. There are two drilled, tapped, and filled holes at about mid barrel.

Stock Configuration & Condition: The stocks are two-piece checkered walnut with capped pistol grip, monte carlo comb with cheek piece, schnabel forend, sling swivel front and rear, and a basketweave textured black rubber Browning buttpad. There is an attached brown leather sling. There is a notable white scratch on the cheekpiece. There are other less frequently distributed small dings and light draglines. The checkering shows a few small nicks throughout and is otherwise sharp. There are no chips or cracks. The LOP measures 13 5/8″ from the front of the trigger to the back of the buttpad. The pad has minor wear with light runs along the sides. Overall, the stocks are in about Very Good-Fine condition.

Overall Condition: This rifle retains about 95% of its metal finish. There is some light erosion on the bottom right edge of the receiver. The lever also has a small amount of light oxidation. There are some light marks on the barrel, notably two faint scratches on the left side of the barrel. There are a few scattered minor marks. The screw heads are sharp. The markings are clear. Overall, this rifle is in about Fine condition.

Mechanics: The action works correctly. The hammer has a safety notch. The trigger breaks crisply and the lever locks-up solidly. We have not fired this rifle. As with all used firearms, a thorough cleaning may be necessary to meet your maintenance standards.

Box, Paperwork & Accessories: This rifle comes with the installed scope and sling as described.

Our Assessment: When they were first manufactured, the John Browning designed Winchester Model 1885 rifles were deemed stronger than the prior Sharps rifles, and the different sight and trigger options available made them an instant hit with hunters and target shooters alike. The Model 1885 rifles were targeted at competitors in “Match Shooting”, a sport which was extremely popular from about 1871 to 1917. The Winchester rifles challenged the Sharps, Remington, Maynard and Ballard rifles, and quickly became known for their reliability and accuracy. Major Ned Roberts, inventor of the .257 Roberts cartridge, described the Model 1885 as “the most reliable, strongest and altogether best single shot rifle ever produced”. In 1973, Browning introduced their own version of the 1885, the B-78 High Power, in a variety of cartridges. This example is chambered for .22-250 Remington and has a 26″ tapered octagon barrel. The rifle is in Fine condition, appearing to have seen a few trips to the range or maybe the field, but responsible use and maintenance. With its simple, rugged design, target shooting heritage, and .22-250 chambering, this is a rifle that will do just as well popping prairie dogs as it will punching paper. It doesn’t hurt that it’s easy on the eyes, too. Please see our photos and good luck!