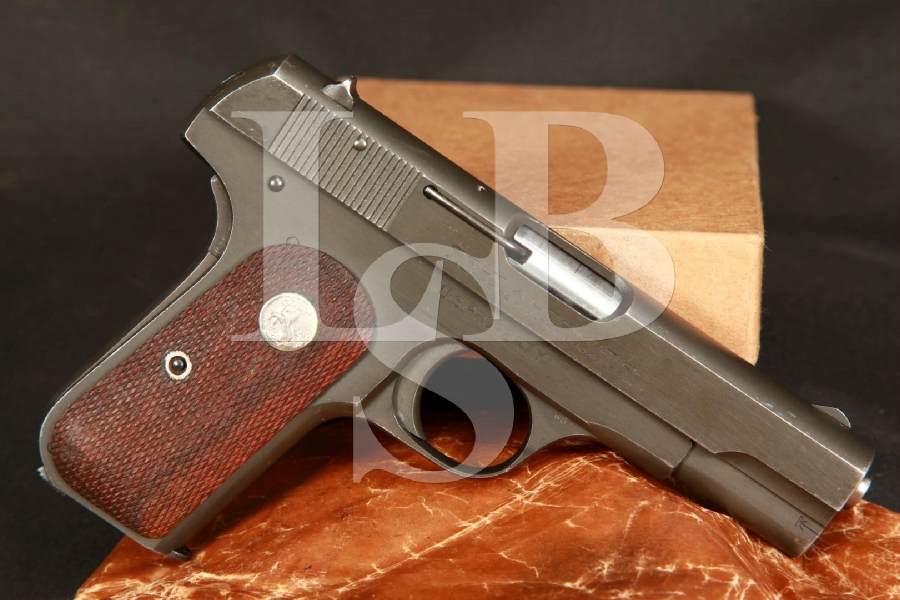 SOLD FOR:$2,005
LSB#: 150126LV03
Make: Colt
Model: Model 1903 Pocket Hammerless AKA General Officers Pistol (Army Model M)
Serial Number: 562494
Year of Manufacture: 1944 (“The Colt Pocket Hammerless Automatic Pistols” by John W. Brunner)
Caliber: .32 ACP (.32 Auto)
Action Type: Single Action, Semi-Automatic with Removable Magazine
Markings: The left side of the slide is marked “COLT’S PT. F.A. MFG. CO. / HARTFORD, CT. U.S.A. / PATENTED APR.20,1897. DEC.22.1903”, and at the rear with a Rampant Colt logo. The left side of the frame is marked “562494” and at the rear with a very faint Ordnance “wheel” inspection mark. The right side of the slide is marked “AUTOMATIC COLT / CALIBRE 32 RIMLESS SMOKELESS”. The right side of the frame is marked “U. S. PROPERTY”. The left front of the trigger guard is marked with a “VP” in a triangle and at the rear with an “X”. The right front of the trigger guard is marked “65”. The groove on the underside of the slide on the left side is marked “561494”.
Barrel Length: 3 3/4”
Sights / Optics: The front sight is a short rounded bladed fixed to the top of the slide with a serrated ramped rear surface. The rear sight is a square notch dovetail set to the rear of the slide. These sights are correct for a pistol made after Oct. 1944. Prior pistols had a smoothly rounded front sight and a “U” notched rear sight.
Stock Configuration & Condition: The grips are checkered walnut with nickel Rampant Colt medallions at the top of each grip. The grips show oil staining. The checkering shows moderate wear with heavy wear along the bottom of the right grip and two large spots of heavy wear in the left grip. The grips are in about Very Good overall Condition.
Type of Finish: Parkerized
Finish Originality: The finish is as military applied. The frame finish is definitely original.
Bore Condition: The bore is bright and the rifling is sharp. There is no erosion.
Overall Condition: This handgun retains about 90% of its metal finish. The pistol shows thinning on the edges of the slide and frame with spots of surface loss on the left side and top of the slide. There are also a few compression marks in the top of the slide, the back surface of the slide, and the front strap, with light handling marks in the grip safety. There is also light wear on the sides of the trigger from rubbing on the frame. There are three tiny compression marks in the serrations on the left side of the slide, the safety checkering is sharp and the grip screw is disfigured. The markings are clear: the Rampant Colt is very sharp and the ordnance mark is one of the clearest we have seen on this model. Overall, this handgun rates in about Fine condition.
Mechanics: The action functions correctly and the slide is tight to the frame. It has a grip safety, manual safety, magazine disconnect, and a barrel bushing. The slide has 19 serrations and the sights are the correct type for a pistol made after Oct. 1944. We did not fire this handgun.
Box, Paperwork & Accessories: This pistol comes with one 8-round magazine in a tan cardboard box as shipped from Colt. The magazine is blued and marked “CAL. 32 / COLT” on the floorplate. The magazine shows surface frosting sprinkled over its finish with scratches through the finish on both sides from aggressive polishing. The floorplate shows light marks with a spot of surface loss on its rear edge from the magazine release. Overall, the magazine is in about Very Good condition. The box is unmarked and shows no wear to speak of. It is in about Excellent condition.
Our Assessment: From Wikipedia: “The Colt Model 1903 Pocket Hammerless is a semi-automatic pistol designed by John Browning, and was the first of the Colt concealed hammer models. Despite the title ‘Hammerless’, the Model 1903 does have a hammer, which is covered and hidden from view under the rear of the slide. These pistols were popular civilian firearms for much of their life, and also served as United States General Officer pistols (Model M) from the 1940s until their replacement by the M15 General Officers pistol in the 1970s. The Office of Strategic Services issued the Model 1903 to its officers during World War II and it was a popular back-up/off-duty model with police officers in the United States. Gangsters also favored this pistol, including Bonnie Parker and John Dillinger.” This is a Colt 1903 Pocket Hammerless semi-auto made in 1944. It is marked “U.S. PROPERTY” on the right side of the slide, but the serial number on the frame and slide match do not match. It is in about Fine condition with about 90% of its Parkerized military finish remaining. It shows thinning on the edges of the slide and frame with a spots of surface loss and handling marks. The grips are checkered walnut and show moderate wear with spots of heavy wear. The bore is bright with sharp rifling, and the pistol comes in a cardboard box of the type used by Colt to ship their pistols to the government. This model is highly collectable and should elicit collector interest. If the collectors don’t show enough attention, this will make someone a great pistol for concealed carry and for informal target practice.