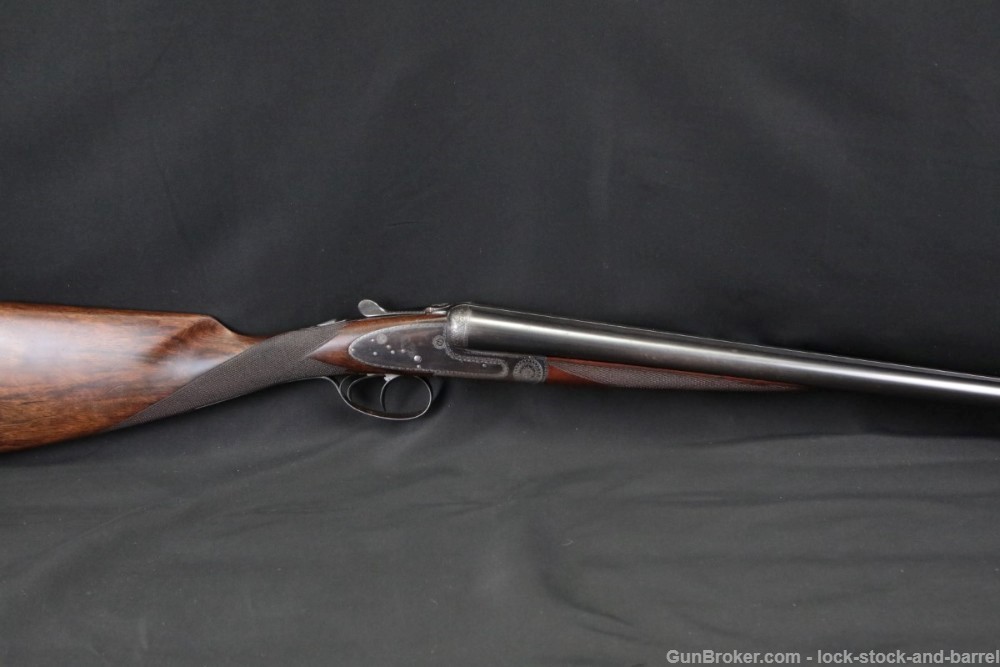 Make: The gun was made as a “Guild Gun”, the barrels were made by Jean Falla

Action Type: Top-Break Side by Side with Individual Ejectors

Markings: The bottom of each barrel is marked “-POLDI NICKEL STEEL KLADNO J.F-” (Jean Falla using Czech nickel steel), with Falla’s trademark and Belgian proofs. The bottom of the right barrel is also marked “FALLA / 6525”. The barrel flats are marked with a series of Belgian proof marks including “o” date code. The left barrel is marked “BELGIQUE” at the rear edge. The water table is marked with “6525” and Belgian proofs. The fences have foliate relief engraving. The receiver, sideplates, lever and guard have border engraving. The receiver’s border engraving incorporates “BELGIQUE” on the left at the edge of the water table. The guard is marked “6525”.

Sights / Optics: There is a white bead at the front of the rib. The top of the rib is finely checkered to reduce glare.

Stock Configuration & Condition: The stocks are a two-piece checkered walnut set with splinter forend, straight grip, slight monte-carlo comb and leather-covered rubber buttpad. The forend has a repaired chip-loss at the front-left edge and a tiny loss at the front-right edge with only a few other minor marks. The buttstock has a few dings in the left, including in the checkering, a notable scratch at the left of the toe and a few other scattered minor nicks and scratches. The checkering is generally sharp. The LOP measures 14 1/2? and 13 1/2? from the fronts of the triggers to the back of the buttpad, 13 5/8? and 12 5/8? to the back of the wood. The drop at the front of the comb is 1 1/4?, drop at the rear of the comb 1 3/4? and drop at heel 2 1/4?. The pad has scattered light wear, but remains fairly supple. The stock is cast off for a right handed shooter. Overall, the stocks are in Very Good-plus condition.

Finish Originality: The case color on the water table indicates that the receiver was chemically blued. Other finish appears Original.

Bore Condition: The bores are mostly bright. There is no erosion in the bores, but there is some stubborn fouling.

Overall Condition: This shotgun retains about 90% of its metal finish. The finish is thinning at all edges. The barrels have light handling wear and minor oxidation over the forend and some light finish wear at the muzzles, more notable on the left barrel, with some other scattered minor nicks and scratches. The bottom of the receiver and the guard show handling wear and some minor oxidation. The sideplates have some light surface oxidation, more notable on the right plate. The receiver and sideplates have a few light nicks and scratches including a tool-slip on the left sideplate at its forward screw. Some worn areas show discoloration from oxidation. The action shows operational wear. The screw heads are lightly tool marked with strong slots. The markings are clear. Overall, this shotgun is in Very Good-plus condition.

Mechanics: The action functions correctly including ejectors. The barrels lock up to the receiver with no play. The safety does not engage automatically when the action is opened, but functions properly when engaged manually. We have not fired this shotgun. As with all used firearms, a thorough cleaning may be necessary to meet your maintenance standards.

Our Assessment: Liege, Belgium has long been a center of firearms manufacture, both for commercial and military arms, domestic and export sales. The area’s gunmaking tradition includes a lot of cottage industry, with various individuals and small firms making stocks, barrels, locks, etc. This is one example of such a “guild gun”, with no external markings of the firm which assembled and sold it, though the barrels are marked with the trademark of one Jean Falla. Belgian doubles have something of a mixed reputation here in the States, mostly due to a flood of inexpensive guns exported here in the late 19th and early 20th centuries. The year 1914 would put an end to that, both due to protectionist tariffs put in place by America, but also due to the invasion of Belgium by the Germans. This example is from the inter-war period, and shows the higher quality typical of that era. The barrels were made with quality nickel-steel from Czechoslovakia and the gun’s overall appearance, handling and workmanship will make for a fine addition to any safe. Whether you’re adding to a collection, want a classy gun to bust some clays, or are an avid bird hunter, this is a shotgun well worth dropping a bid on. Please see our photos and good luck!