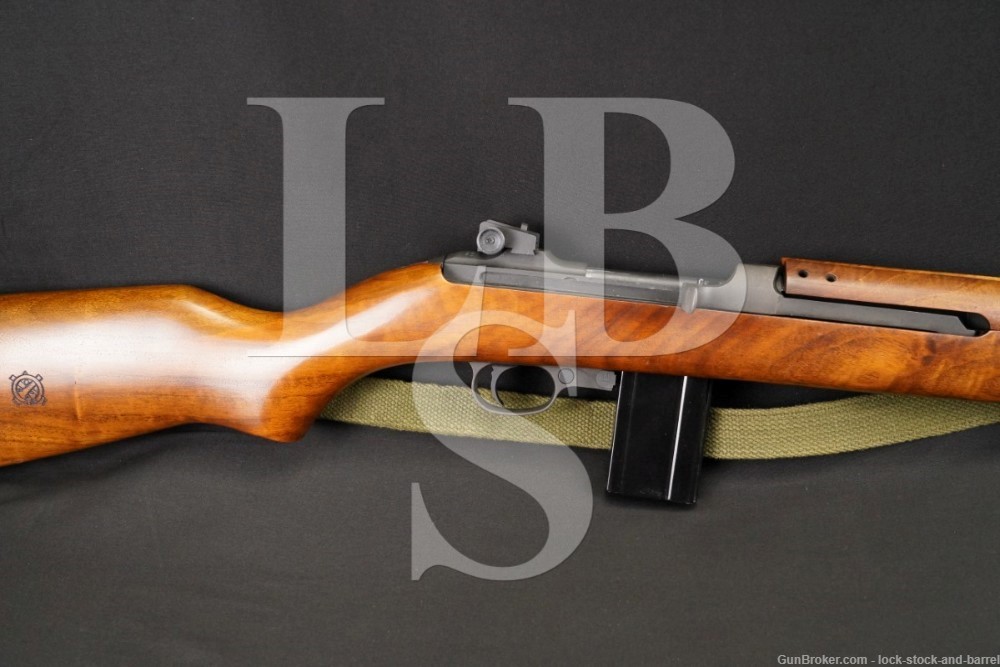 Sights / Optics: The front sight is a post set between two protective wings. The rear sight is a Type II style adjustable aperture.

Stock Configuration & Condition: The stock has a pistol grip, Type II style barrel band with sling loop, sling well, sling pass through, and a metal buttplate. The wood shows scattered scrapes & scratches. The LOP measures 13 1/2 inches from the front of the trigger to the back of the buttplate. The stock rates in about Very Good Plus to Fine condition.

Bore Condition: The bore is bright; semi bright near the muzzle. The rifling is sharp. There is no erosion. The bore shows an M.E. of 0.7.

Overall Condition: This rifle retains about 97% of its metal finish. The metal shows scuffs and light scrapes. The receiver and bolt show operational wear. The markings are deep. Overall, this rifle rates in about Fine condition.

Box, Paperwork & Accessories: The rifle comes with a canvas sling and a 15 round magazine. The magazine shows scratches and appears to function properly.
The 15 round magazine is not available to residents of California or any other state with magazine capacity restrictions.

In 1941, with the US being pulled into one of the greatest conflicts in world history, a division of General Motors was tasked to support the war effort.
The result was firearm history with Inland Manufacturing becoming one of the largest gun manufacturers in the US, producing nearly 3 million firearms in less than 5 years.
The most notable of Inland’s firearm production was the .30 Caliber M1 carbine and the folding stock variant, the M1A1 Paratrooper model.
Dayton, Ohio was home for the original Inland company, and is now the home of the new Inland Manufacturing located just two miles from the original facility. Today’s Inland Manufacturing is now producing a new line of .30 caliber M1 carbines…The M1 1944 carbines feature many of the same characteristics of the original Inland Carbines and are manufactured in the USA!