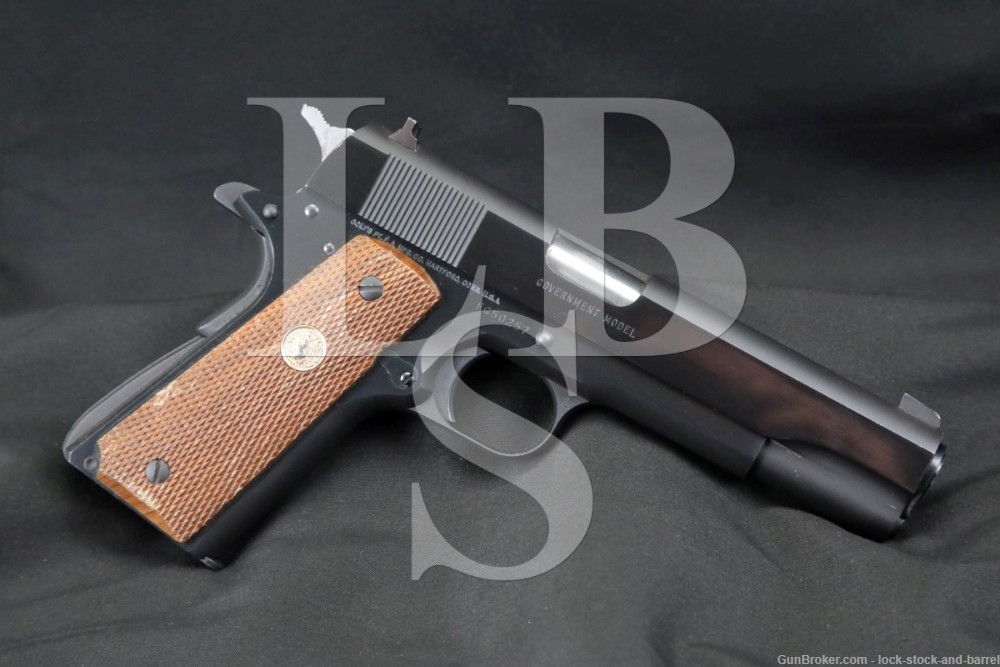 Stock Configuration & Condition: The grips are two-piece checkered wood with gold-colored Colt medallions. There are a few scattered little nicks and light scrapes, some of the most noticeable are on the back edge of the left panel and on the top edge of the right panel. There are some areas of finish that is separating from the grips. The checkering is still mostly intact and strong. There are no chips or cracks. Overall, the grip is in Fine condition.

Overall Condition: This pistol retains about 93% of its metal finish. Custom aftermarket sights have been installed. There are some scattered scuffs and draglines. There are a few little nicks and dings, the most noticeable are on the right side of the slide on the rear edge. There are some little spots of surface frost, some of the most noticeable are on the grip frame around the panels. There are some spots of discoloration from previous oxidation on the bright sides of the hammer. There is a bit of discoloration in the mainspring housing serrations. There are some scattered light handling marks. The screw heads are lightly used. The markings are clear. Overall, this pistol is in Fine condition as customized.

Our Assessment: Colt’s 1911 served the United States military through two World Wars and several other conflicts, is still in use by some units today, and has become popular with law enforcement, competitors, and recreational shooters across the nation. The design was the end-result of a series of developments by famous gun designer John Browning, starting with the Model 1900. The advances made by Browning were revolutionary at the time, and were so successful that they are considered commonplace today. Browning not only developed first a pivoting and then a tilting barrel to allow for a locked system, he developed the concept of “the slide”, which is now synonymous with semi-automatic handguns. Having secured a contract for the US Military sidearm, Colt also offered the pistol to the commercial market as the “Government Model”. The design has seen some updates including a firing-pin block safety, higher-profile sights (these sights are aftermarket), and more ergonomic grips, but the basic design and fantastic trigger remain the same after more than a century. This example is a fairly recent Series 80 model chambered for the .45 ACP cartridge which has since seen some upgrades outside of the factory. The pistol will make for a fine Single Stack division or Bowling Pin shooting pistol.  Please see our photos and good luck!