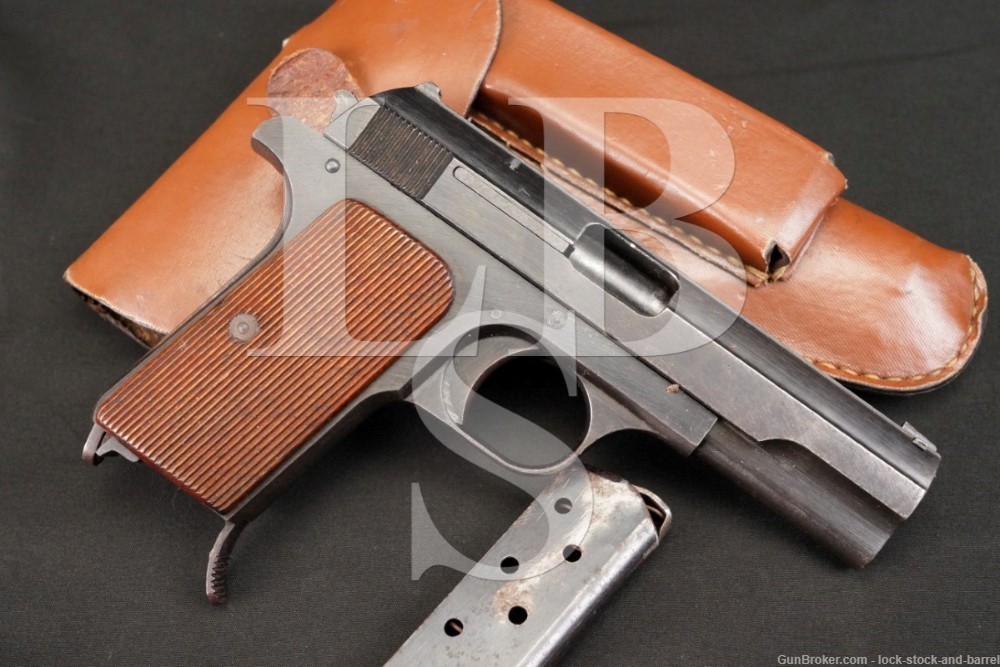 Action Type: Single-Action Semi-Automatic Pistol fed by a Detachable Magazine with a grip-safety

Sights/ Optics: The front sight is a dovetailed blade. The top of the slide is serrated to reduce glare. The rear sight is an integral “V”-notch.

Stock Configuration & Condition/ Grip: The grip panels are two-piece serrated wood. The grip panels have some light handling marks, nicks and scuffs. Notably, the left panel is mostly discolored by oil stains. There are no chips or cracks. Overall, the grips are in Very Good condition.

Overall Condition: The pistol retains about 75% of its metal finish. There are some light handling marks, nicks and scuffs on the gun’s metal surfaces. Notably, there is light wear along the leading edges and scattered patches of light surface oxidation. The markings remain clear. The screwhead is lightly tooled and remains serviceable. Overall, the pistol remains in Very Good condition.

Mechanics: The action functions correctly. The slide to frame fit is snug. We have not fired this pistol. As with all used firearms, a thorough cleaning may be necessary to meet your maintenance requirements.

Box Paperwork and Accessories: There are a total of two magazines included with the handgun and a brown leather holster. The magazines both are marked with the model designation “P.Mod.37” and neither is serial matched; one is marked “25787” and the other “78854”. The magazines have some light handling marks and scattered light surface oxidation, but they both remain in Very Good condition. The holster has some light handling marks but it remains in Very Good condition.

Our Assessment: The Femaru Model 1937 was a Hungarian service pistol that was in use from 1937-1944. The gun was originally chambered for 9mm short (.380 ACP) cartridges and used by the Hungarian Army. In 1941 Hungary joined the German led coalition that invaded the Soviet Union and the gun impressed German officials. Thus, the Luftwaffe (German air force) placed an order for 50,000 Model 1937s rechambered for 7,65mm (.32 ACP) rounds with manual safeties. This initial order of handguns, made in 1941, were marked “jhv 41” (indicating they were part of that order made in 1941). In 1943 a second order was secured between the Wehrmacht and Femaru for 60,000 additional units. About half of the order was delivered before the factory that produced the pistols was captured by the Red Army in late 1944. These guns were distinguished by the marking “jhv 43” and it is believed this second order was divided between the Heer (German Army) and Luftwaffe. Hungary attempted to mediate a separate peace with the Soviet Union in October of 1944, the Germans responded by kidnapping the Hungarian leader Miklos Horthy’s son, and Horthy was forced to cede power to the Arrow Cross party which would follow Berlin’s instructions. Soviet forces advanced into Hungary soon thereafter, besieging the capital Budapest in late December, it fell a little over a month later in early February of 1945. Sporadic fighting continued in Hungary until early April and the country ended up being absorbed into the Communist Bloc at the end of WWII.

This particular specimen was part of the second order of Model 1937 handgun made for the Wehrmacht which was placed in 1943. The gun has some light handling wear, but it remains both aesthetically pleasing and mechanically sound. This is a solid option for WWII collectors and fans of historical firearms. Good luck on your bid!