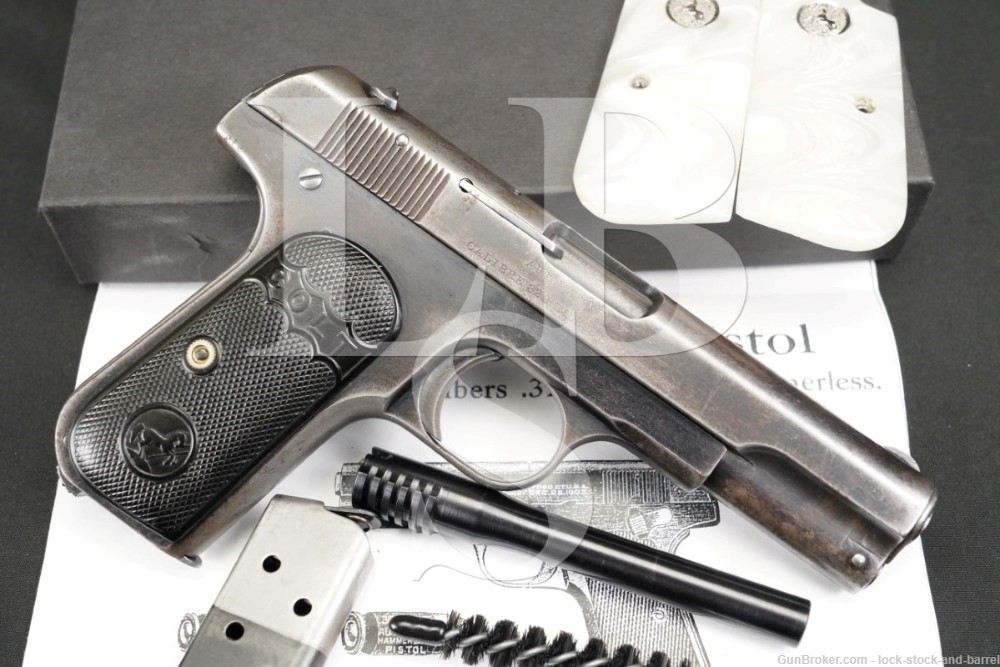 Sights/Optics: The front sight is a short rounded blade fixed to the front of the slide. The rear sight is a round-topped “U” notch dovetailed into the rear of the slide.

Stock Configuration and Condition: The grips are Type I checkered black hard rubber with “COLT” in a banner near the tops and a Rampant Colt logo in circle in the bottom half of the grips. The grips have light handling wear with a few scattered nicks and scuffs, most notable above the banner on the left panel. The checkering, colts, and lettering are well defined. There are no chips or cracks. Overall, the grips are in Very Good-plus condition.

Also included is a set of faux-pearl plastic panels with silver-colored Colt medallions. The additional grips have no notable wear or damage, only light handling marks. There are no chips or cracks. Overall, the additional grips are in Excellent condition.

Bore Condition: The bore is gray with well-defined rifling. There is scattered light-moderate erosion in the bore.

The additional barrel has a bright bore with sharp rifling and no erosion.

Overall Condition: This handgun retains about 40% of its metal finish. The finish is thinning at all edges. The grip areas are mostly worn to white and there is other scattered light finish wear. There are light nicks, scuffs, scratches and minor oxidation scattered throughout. There are tool marks on each side of the slide at the recoil plunger retaining pin and at the firing pin retaining pin. There is some scattered minor erosion. The action shows operational wear. The screw heads have strong slots. The markings are clear. Overall, this pistol rates in Good condition.

Mechanics: The action functions correctly and the slide has minor play to the frame. It has a grip safety and a manual safety but does not have a magazine disconnect safety (correct for this period of production). The safety can be used to lock the slide back. We did not fire this handgun. As with all firearms, thorough cleaning may be necessary to meet your maintenance standards.

Box, Paperwork, and Accessories: This 1903 comes with a reproduction two-piece Colt box and manual, the additional grips and barrel as described, a cleaning brush and a total of two 8-round magazines. One magazine is marked “CAL. 32 / COLT” on the bottom and the other is unmarked. Both are two-tone with the top portion in the white. The white area is larger on the marked magazine.

Our Assessment: The Colt Model 1903 Pocket Hammerless is a semi-automatic pistol designed by John Browning, and was the 1st of the Colt concealed hammer models, followed by the M1908 in .380 ACP. Despite the title ‘Hammerless’, the M1903 and M1908 pistols do have a hammer, which is covered and hidden from view under the rear of the slide. This allowed the weapon to be carried in and withdrawn from a pocket quickly and smoothly without snagging. These pistols were popular civilian firearms for much of their life, and also served as United States General Officer pistols from the 1940s until their replacement by the M15 General Officers pistol in the 1970s. The Office of Strategic Services issued the Model 1903 to its officers during World War II and it was a popular back-up/off-duty model with police officers in the United States. Gangsters also favored this pistol, including Bonnie Parker and John Dillinger. This is a fairly early Colt 1903 Pocket Hammerless semi-auto made in 1905. It has a separate barrel bushing, a slightly longer 4″ barrel and screw-secured safety lever. This pistol rates in Good condition with roughly 40% of its blued finish remaining. The barrel has some erosion in it, but an after-market barrel is also included which should be great for shooting. The pistol has early Type I grips, but also comes with an attractive set of faux-pearl grips. This Type I Pocket Hammerless would make a nice addition to a collection missing one of the early variants and will display well with its early features and “been there, done that” appearance. Good luck and happy bidding!