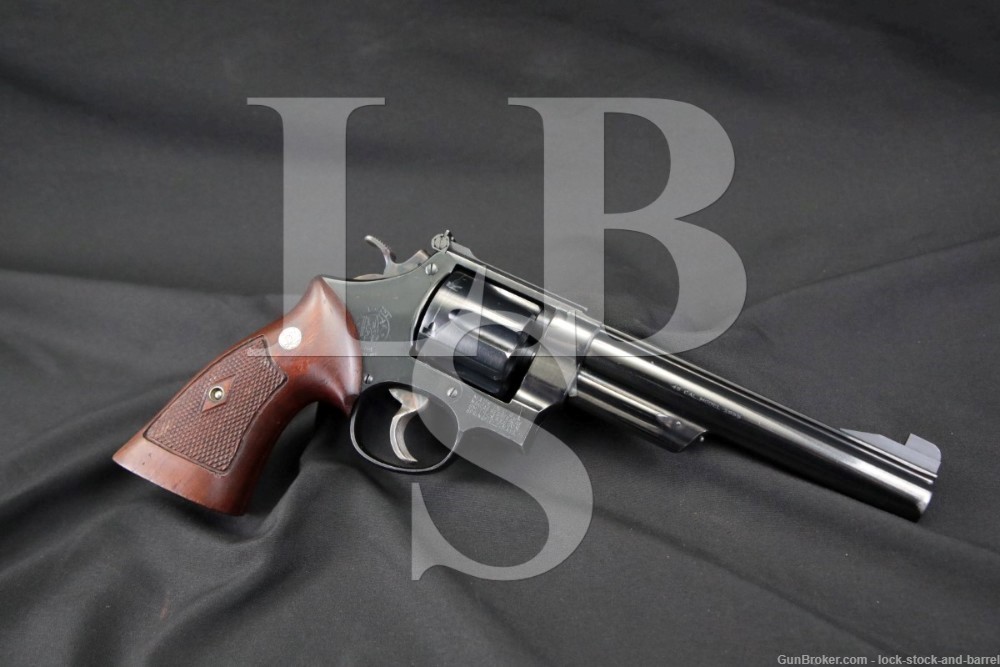 Sights / Optics: The front sight is a Patridge blade pinned to a serrated, ramped base fixed to the serrated barrel rib. The rear sight is a flat top, square notched leaf in a base that is micrometer click adjustable for windage and elevation.

Bore Condition: The bore is bright and the rifling is shallow but has crisp well defined edges. There are a some freckles of faint surface erosion.

Overall Condition: This handgun retains about 91% of its metal finish. There is finish loss on the barrel at the muzzle. There are some scattered little nicks and light scratches, some of the most noticeable are on the bottom of the frame & trigger guard, the right side of the frame at the markings, and on the cylinder but they are scattered throughout. There are some scattered scuffs that have thinned the finish. There are some spots of oxidation on the grip frame under the grips. There is thinning on the edges. There are a few little spots of minor surface oxidation. There is a turn line through the finish on the cylinder. The screw heads are sharp to lightly worn with strong slots. The markings are clear. Overall, this revolver is in about Fine condition.

Mechanics: The action functions correctly. The double-action trigger is smooth and the single-action trigger is crisp. The cylinder locks up with light play on each of the six chambers. We did not fire this handgun. As with all used firearms, a thorough cleaning may be necessary to meet your maintenance standards.

Our Assessment: This is Smith & Wesson’s 1955 .45 Target Model, a heavy barreled target revolver chambered in .45 ACP with a 6 1/2? barrel, adjustable sights, target trigger and target hammer. The model would later go on to become the model 25. The 1955 .45 Target Model, and its later numbered version, are built on the N-Frame and were in production from 1955 to 1991 and have made later appearances in the “Heritage” and “Classics” series from Smith & Wesson. The .45 ACP is still a popular caliber with a wide variety of ammunition available at reasonable prices (usually). This example is in about Fine condition with about 91% of its original finish with some light wear, a good bore and strong mechanics. While large for concealed carry, this revolver would be great for target shooting as the name implies, as a hunting sidearm, or even home defense. Please see our pictures and good luck!