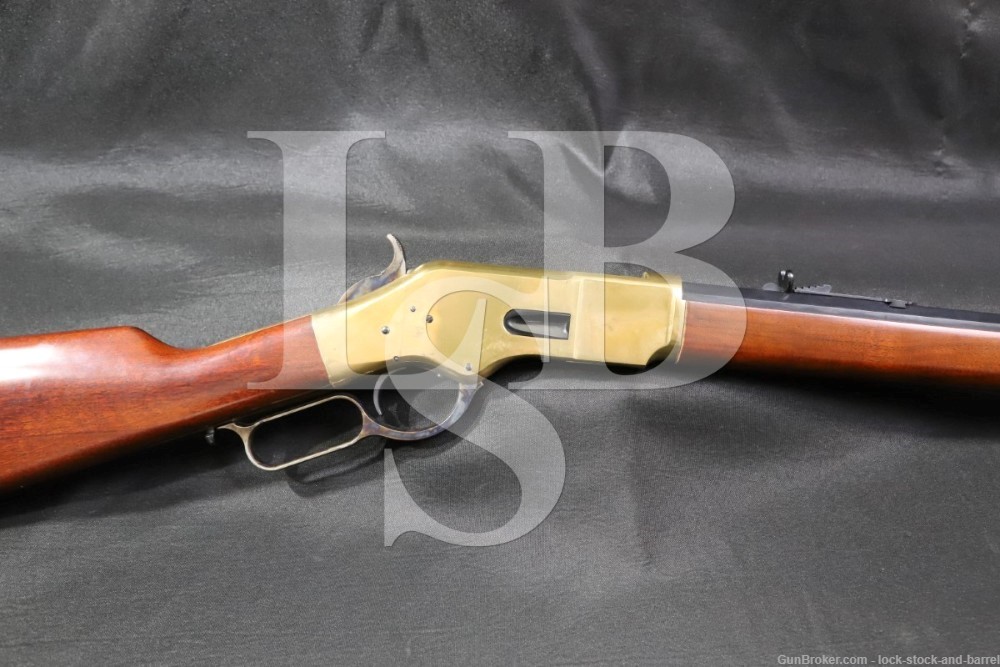 Stock Configuration & Condition: The stocks are two-piece smooth wood with a capped forearm, straight grip, straight comb, and a brass crescent buttplate. There are some infrequently scattered light draglines and minor nicks, most notable on the left side of the buttstock and belly. There are no chips or cracks. The LOP measures 13 1/8” from the front of the trigger to the back of the buttplate. The plate shows some faint nicks and scratches throughout. The stocks rate in about Fine-Plus overall condition.

Overall Condition: This rifle retains about 96% of its metal finish. The case coloring on the lever and hammer are strong. The receiver shows some scattered light scratches and light tarnish throughout. The only visible imperfection on the barrel is a small thinned spot on the top right leading edge. There is minimal operational wear. The screw heads are sharp. The markings are crisp. Overall, this rifle rates in about Fine-Plus condition.

Mechanics: The action functions correctly. The lever lock and safety are present. The hammer has a quarter cock safety position. We did not fire this rifle. As with all used firearms, a thorough cleaning may be necessary to meet your maintenance requirements.

Our Assessment: This Uberti made replica of the Winchester model 1866 is a lever-action repeating rifle that takes .45 Colt rounds and it was imported by Taylor’s & Co. The Winchester model 1866 is an iconic design, playing an important role in firearms history. Nicknamed the “Yellowboy” because of its brass receiver, the rifle was purchased by a number of nations for military use. The Ottoman Empire used Winchester repeating rifles against the Russian military during the Siege of Plevna in the late 1870s. The modern repeaters outperformed the archaic rifles the Russian troops had equipped, leading to disproportionate casualties on the Russian side. Despite the eventual victory of the Russian led coalition, the effectiveness of the Winchester repeating rifles led European powers to upgrade their arsenals with repeating arms and magazine fed rifles in lieu of single-shot weapons. This is one rifle you do not want to miss out on! Please see our photos and good luck!