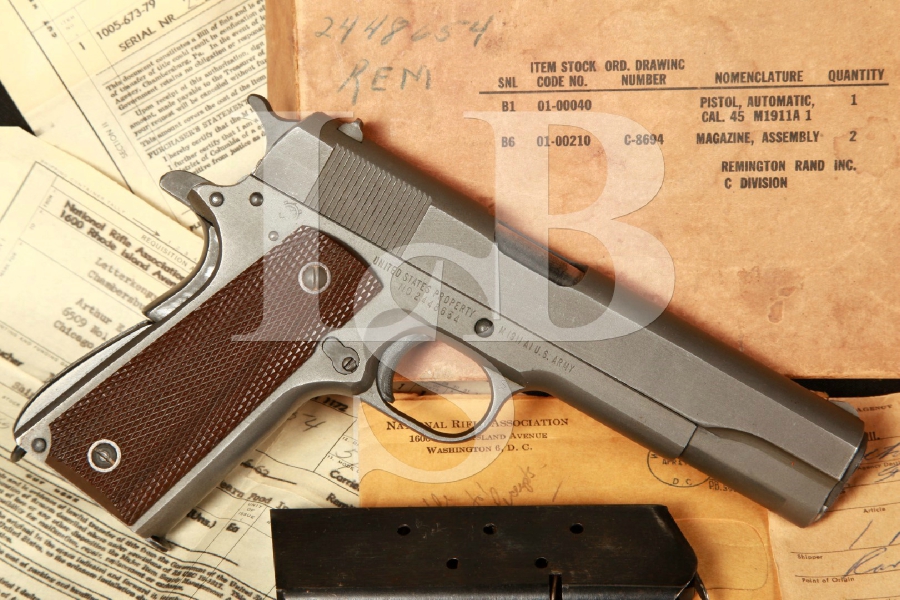 SOLD FOR:$3,000
LSB#: 150226AH02
Make: Remington Rand
Model: 1911-A1
Serial Number: 2448654
Year of Manufacture: 1945 (Pg. 394 of Clawson’s “Colt .45 Service Pistols”)
Caliber: .45 ACP
Action Type: Single Action, Semi-Automatic with Removable Magazine
Markings: The left side of the slide is marked “REMINGTON RAND INC. / SYRACUSE, N.Y. U.S.A.” The left of the frame below the magazine release and the top of the slide in front of the rear sight are marked with a “P” acceptance proof. The left side of the frame above the magazine release is marked “FJA” (Frank J. Atwood Lt. Col., Sub-Inspector for Ithaca, Remington Rand and Union Switch 1942-1944.) The right side of the frame is marked “UNITED STATES PROPERTY / NO. 2448654”, “M1911 A1 U.S. ARMY”. There is a very faint ordnance cartouche on the right side of the frame behind the grip. The right front of the trigger guard is marked “S” and the rear “H”. The left front of the trigger guard is marked “5”. The leg side of the barrel lug is marked “P” and the right side is marked “HS”, indicating it was made by High Standard, a known supplier of barrels to Remington Rand. The flat on the top of the frame in front of the hammer is marked “G”.
Barrel Length: 5”
Sights / Optics: The front sight is a short blade with a serrated ramp fixed to the slide. The face of the ramp has been painted with bright red fingernail polish. The rear sight is a square notch dovetailed into the slide.
Stock Configuration & Condition: The grips are checkered dark red plastic. The checkering is sharp without mars. The grips rate in about Excellent overall condition.
Type of Finish: The pistol has a gray Parkerized finish and the barrel has a black oxide finish. The mainspring housing is serrated.
Finish Originality: The finish is as military applied.
Bore Condition: The bore is bright and the rifling is sharp. There is no erosion in the bore.
Overall Condition: This pistol retains about 94% of its metal finish. There is light thinning on the edges of the slide and frame and a few light handling marks on the sides of the slide. There is also thinning in the front strap and mainspring housing, and on the edges of the grip safety. There are two tiny dings in the mainspring housing serrations and light marks on the sides of the trigger guard. The recoil spring plug checkering shows light wear and the magazine release checkering and slide release serrations are sharp. The grip screws are sharp and the markings are clear. Overall, this pistol rates in about Fine condition.
Mechanics: The trigger pull is crisp. The slide is very tight to the frame. This pistol has manual and grip safeties. The action functions correctly. We have not fired this pistol.
Box, Paperwork & Accessories: This pistol comes with a total of two 7-round blued magazines. The magazine in the pistol is unmarked and shows light wear with a shallow dent near the bottom on the left side. The magazine is in about Very Good condition. The spare magazine is marked “C-R” on the floorplate, indicating it was manufactured by Risdon for Colt. The magazine shows light wear and is in about Fine condition. The pistol comes in its original brown cardboard box as shipped by Remington Rand Inc., C Division. The top of the box is stamped in ink showing the contents of the box are one item number 01-00040 Pistol, Automatic Cal.45 M1911A1 and two item number 01-00210 Magazine, Assembly. The serial number of the pistol is also written on the top in ink. The lid shows fraying on its edges and all four corners are torn. The bottom of the box shows fraying and one of its corners is torn. The inside of the bottom shows abrasions from the sights and hammer. Overall, the box is in about Good condition. Included in the box are two copies of the NRA invoice showing that the original purchaser of this pistol bought it from the NRA in 1962 for $17 including shipping.
Our Assessment: > The 1911 and 1911-A1 pistols served the military of the United States from 1911 to 1985, through both World Wars and the Korean and Vietnam wars. They gained a reputation as a reliable handgun with plenty of stopping power, and are held in high regard by those who have used them. This is a WWII manufactured 1911-A1 pistol made by Remington Rand. It is correctly marked for a Remington produced pistol and has a barrel by High Standard, who produced barrels for Remington Rand. In his book “Colt .45 Service Pistols”, Clawson indicates that by the end of the war, Remington Rand produced the lowest cost pistol and that “during 1944 and 1945 they produced a superior weapon, equal to or better than those produced by other companies”. This says a lot for Remington Rand, despite having a few problems in the early part of 1943 as they tried to ramp up production. This pistol was made in 1945 and appears to be unissued. It was purchased from the NRA through the Director of Civilian Marksmanship program in 1962, and comes with its original shipping box, two magazines and paperwork from the NRA. The pistol is in about Fine condition with 94% of its military Parkerized finish remaining. The pistol shows thinning on the front strap, mainspring housing, and on the edges of the slide, frame and grip safety. The plastic grips have sharp checkering without mars and the bore is bright with sharp rifling. This pistol should garner a lot of interest from the collectors of WWI and WWII pistols. This pistol is also a nice find for anyone interested in a top quality pistol. It is perfect for home protection, SASS Wild Bunch side matches and action pistol matches at your local club.