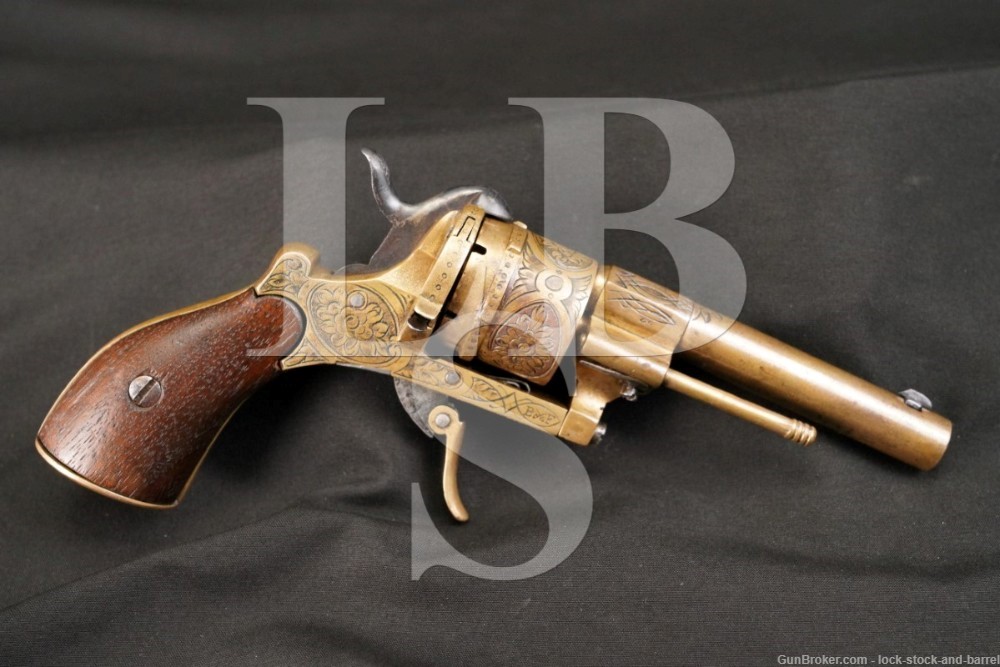 Action Type: Single and Double-Action Pinfire Revolver with a 6-round Side-Gate loaded Cylinder

Markings: The gun has floral scroll engravings on the cylinder, frame and barrel assembly. The cylinder has an oval marked “E / LG / *” stamped at the end of a floral engraving (the marking indicates the gun was made before 1893 when the marking was changed to a crowned oval). The right side of the frame is marked “B” has two crossed swords and “F” (likely the logo of the gun’s manufacturer).

Sights/ Optics: The front sight is a dovetailed blade. The rear sight is a “V” integral to the top of the hammer that can be used when the hammer is cocked.

Stock Configuration & Condition/ Grip: The grip panels are two-piece smooth wood. The grip panels are a bit shy to the frame. There are some light handling marks, nicks and scuffs on the grips. Notably, there is light wear around the screwhead on both panels. There are no chips or cracks. Overall, the grips are in Very Good condition.

Bore Condition: The bore is grey with mostly sharp rifling. There are scattered patches of light-moderate erosion concentrated in the grooves and a notable patch of erosion on the top of the bore near the center.

Overall Condition: The revolver retains about 15% of its metal finish. The brass finish is moderately tarnished, has scattered patches of light surface oxidation, verdigris under the grip panels and some scattered light handling marks. The blued hammer has scattered patches of finish loss and some light surface oxidation. The markings remain clear. The screwhead on the left grip panel is not serviceable, otherwise the screwheads are only lightly tooled and remain serviceable. Overall, the revolver is in Very Good condition for an Antique.

Mechanics: The action functions correctly. The single-action trigger is crisp and double-action is smooth. The cylinder locks with light play on each chamber. We have not fired this revolver. As with all used firearms, a thorough cleaning may be necessary to meet your maintenance requirements.

Box Paperwork and Accessories: The gun comes with a total of twenty five 7mm Pinfire rounds.

Our Assessment: This is a Belgian made variant of the Lefaucheux Revolver chambered for 7mm Pinfire rounds. The Pinfire cartridge was designed by French inventor Casimir Lefaucheux, unfortunately Casimir had a short life and died at the age of 50. His son Eugene proved a prodigal son, he designed a revolver that chambered his father’s cartridge at the age of 22. The design is remembered as the Model 1854 Lefaucheux Revolver which was the first revolver to feature a bored-through cylinder (well before Smith & Wesson). A military variant of the revolver was adopted by several European powers, including France and Spain, and it was imported by the Union for use during the American Civil War. The gun was manufactured by a number of Liege based Belgian firms and French gunsmiths for commercial sales as well. This particular specimen is a commercial variant which was made in Belgian, generally speaking the military variants were single-action revolvers while the commercial ones had a double-action function. The gun was clearly a luxury item with beautiful scroll engravings and an impressive brass finish. The gun has some superficial wear consistent with an Antique firearm, but it remains both mechanically sound and aesthetically pleasing. This is a wonderful option for fans of historical firearms. Good luck on your bid!