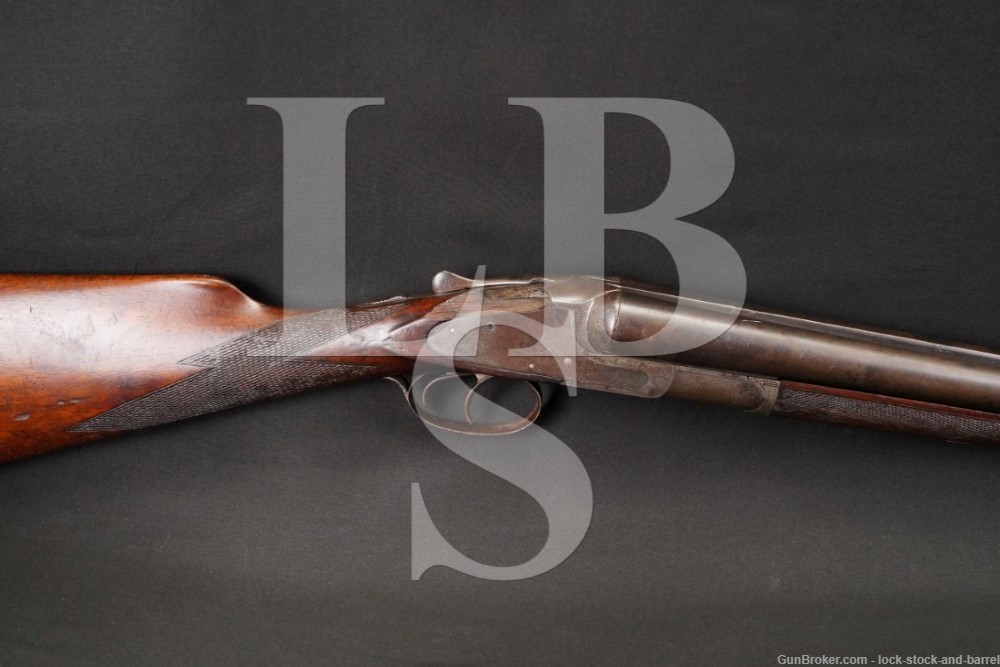 Sights / Optics: There is a white bead at the front of the rib. There was a small brass mid-bead but it has worn or sheared nearly flush with the rib. The top of the rib is matted for glare reduction.

Stock Configuration & Condition: The stocks are checkered English walnut with a black ebony-tipped splinter forend, straight grip and an orange rubber buttpad. The forend has cracks on each side and on the bottom at the rear (care should be taken with assembly/disassembly as the cracks tend to open during each). The wrist has cracks at the rear of the left lockplate and to the right of the top tang with a chip-loss between the top tang and the right lockplate at the front. The stocks have scattered nicks, dings, scrapes and scratches, more notable in the buttstock than the forend. The checkering ranges from well defined to worn, but visible. The LOP measures 14 1/2” and 13 5/8” from the fronts of the triggers to the back of the pad, 13 7/8″ and 13″ to the back of the wood. The drop at comb is 1 1/4″ and the drop at heel is 2 3/4″. The plate has heavy wear and cracking. The stocks rate in Fair-Good overall condition as Antique.

Bore Condition: The bores are semi-bright. There is some light erosion, minor pitting and a few small dents visible in the bores.

Overall Condition: This shotgun retains about 30% of its metal finish. Remaining finish is in the barrels where there is scattered bluing, mottled by wear, surface oxidation and light erosion. The receiver’s case color has muted or gone to a light patina. The guard has scattered surface oxidation and minor erosion. There are some scattered nicks, scuffs and scratches. The action shows operational wear. The screw heads are tool marked with strong slots. The markings are generally clear, the patent dates on the water table are shallow and incomplete. When the gun is inverted, pieces of solder can be heard falling between the barrels, indicating some rib-separation. Overall, this shotgun is in about Good condition as Antique.

Mechanics: The action functions correctly. The barrels lock up to the receiver with no play. Its three-position safety returns to safe from the front position when opened and does not from the rear position.We have not fired this shotgun. As with all used firearms, a thorough cleaning may be necessary to meet your maintenance standards.

Our Assessment: The history of the L.C. Smith firearms is quite interesting. L. C. Smith formed a partnership with L. H. Smith and W.H. Baker to manufacture a three-barrel gun in 1879. L. C. Smith took over the company in 1880 and in 1884 began manufacturing hammer shotguns. Smith became interested in a new-fangled invention called the typewriter, and sold the company in 1888 to John Hunter. Smith went on to form the Smith-Corona company and became a world leader in the manufacture of typewriters. The L. C. Smith shotguns manufactured by Hunter Arms went on to become some of the highest quality shotguns made in the United States. When Marlin bought the Hunter Arms Co. in 1945, they began manufacturing the same guns under the L. C. Smith Gun Company title. A fire caused destruction of most of the manufacturing capability in 1949 and in 1950, the factory was closed.

This is an L. C. Pigeon Gun made in 1898, chambered in 12 gauge with 30” barrels. The Pigeon Gun is interesting as it was not referred to as a “Grade”, as all other L.C. Smiths were, but simply as “Pigeon Gun”. It should come as no surprise that it was marketed to the competitors in pigeon rings, an early form of trap shooting which used live birds. They of course continued to market it to the emerging trap shooting competitions which used inanimate targets. In addition to the pigeon engravings on the guns, they were distinguished by their straight grips. This example shows its age, but they are scarce with just under 1,400 made and it would be a good addition to an L.C. Smith collection missing a Pigeon Gun. It would also be an excellent candidate for restoration. Please see our photos and good luck!