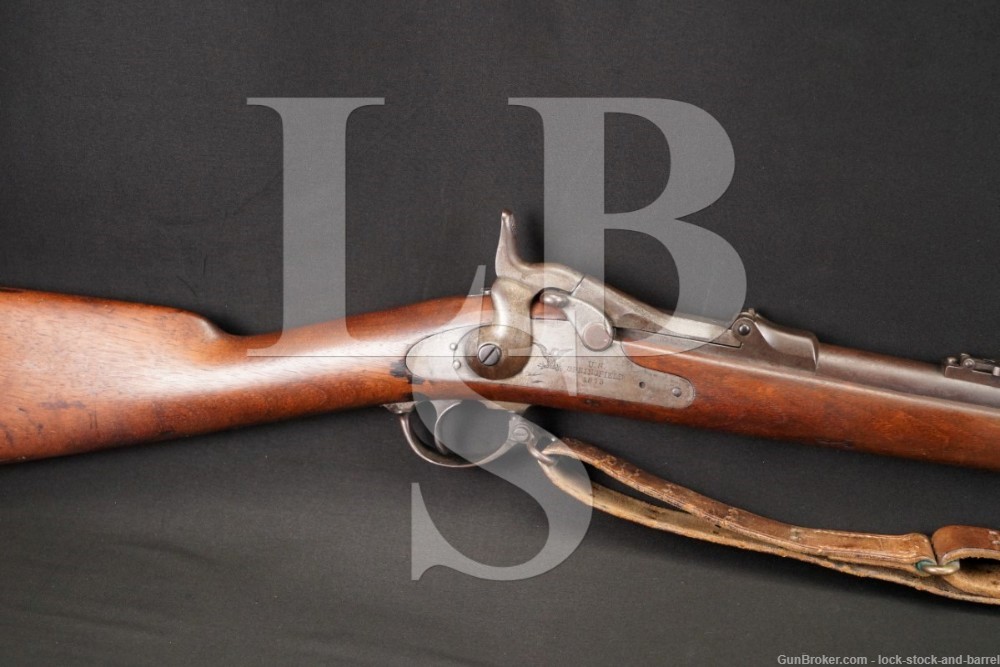 Stock Configuration and Condition: The wood stock has a straight grip, metal nosecap, cutout for the included cleaning rod, 2 barrel bands, stacking loop, 2 sling loops, and a metal buttplate. The buttplate and stock hardware shows scrapes, discoloration from oxidation and light surface erosion. The wood shows several scrapes, scratches and compression marks. Many have damaged or removed small portions of the surface wood. The wood has been oiled. The LOP measures 13 1/2 inches from the front of the trigger to the back of the buttplate. Overall, the stock rates in about Very Good Plus condition, as an antique.

Bore Condition: The bore is gray and the rifling is deep. There is erosion in the bore. There are areas of light pitting in the bore.

Overall Condition: The rifle has lost most of its metal finish. The rear tang of the receiver still retains some of its case coloring. The metal shows scrapes, small scratches, areas of light surface erosion and a brown patina. The screw heads show moderate use. The markings on the metal are well defined. Overall, this rifle rates in Good condition, as an Antique.

Mechanics: The action functions correctly. The hammer has aquarter-cock safety position. We have not fired this rifle. As with all used firearms, a thorough cleaning may be necessary to meet your maintenance standards.

Box, Paperwork, and Accessories: The rifle comes with a leather sling.

Our Assessment: The Model 1873 “Trapdoor” Springfield was the first standard-issue breech-loading rifle adopted by the United States Army and was one of the main service rifles of the U.S. Military until it was gradually replaced by the Springfield Model 1892 bolt-action rifle.
As the armory went through the permutations of the Trapdoor, prior components and supplies would have to be exhausted, and upgrades were made. The history of the Trapdoor rifle is fascinating in that we’re given an usually detailed look into how Springfield Armory got from one version to the next.
This Model 1873 was made back in 1875. It looks pretty good for its age and has nice markings on the metal which add to its history. Good luck.