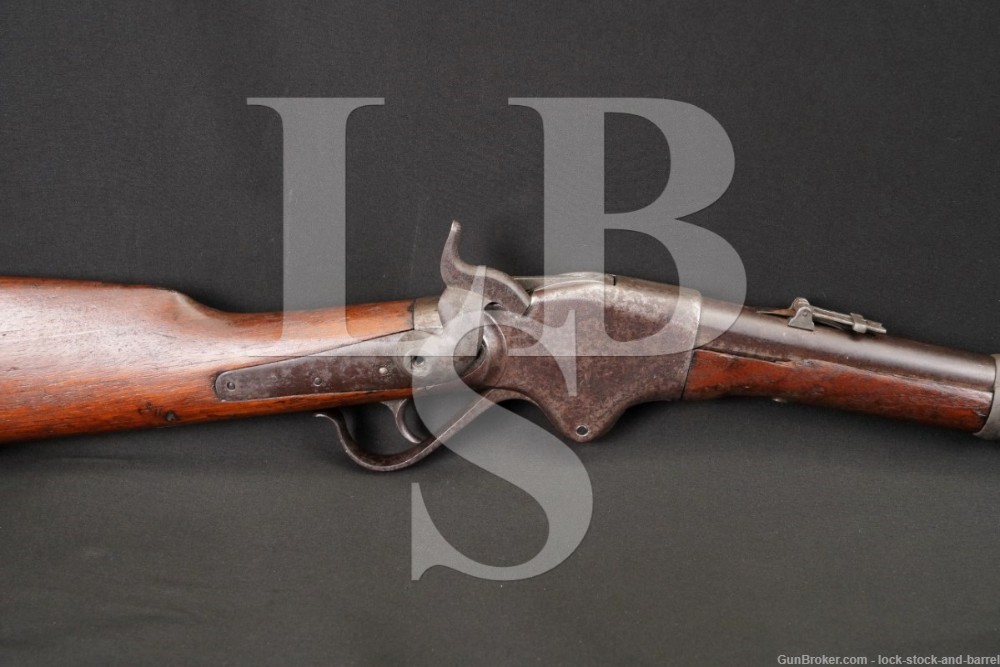 Markings: The top of the receiver has a faded marking which reads “SPENCER REPEATING / RIFLE CO. BOSTON MASS. / PAT’D MARCH 6 1860” and it features the serial number “40332”. The bottom of the barrel, concealed by the forend, is serial matched.

Sights/ Optics: The front sight is a brass blade fixed to a base by the muzzle. The rear sight is a ladder sight which presents a “V”-notch in the down position. When raised the ladder presents an integral “V’-notch at the top and a “V”-notch slider (the slider appears to be jammed by oxidation). The ladder is marked 2-8, inclusive.

Stock Configuration & Condition/ Grip: The stocks are two-piece wood featuring a forend that is secured by a barrel band with a spring and screw, a saddle ring fixed to a sling bar on the left side of the wrist, a straight comb and a metal butt-plate with a provision for the installed tubular magazine.  The stocks have moderate handling marks, nicks and scuffs. Notably, there is a light chip at the front left portion of the forend, a light chip at the wood line on the left side of the forend, slightly behind the rear barrel band where the stock meets the receiver. Also, there are several light cracks at the toe and the toe appears to have been patch repaired with an adhesive, there is a light ding on the right side of the butt by the comb, a patch of compressions between the lock-plate and bottom tang, a tiny patch of wear under the forward portion of the lock-plate and a moderate chip that extends across the right rear half of the wood line on the forend.  The LOP is 13” from the trigger to the rear of the butt-plate. The butt-plate is coated in oxidation and light handling marks. Overall, the stocks are in Good condition.

Bore Condition: The bore is grey with mostly sharp rifling. There are a few patches of light pitting and some light-moderate erosion concentrated in the grooves.

Overall Condition: The rifle retains none of its metal finish. The gun is coated in scattered light-moderate surface oxidation which gives the gun a patina color. There are scattered patches of light pitting, light handling marks, nicks and scuffs. Notably, there is moderate pitting around the muzzle, scattered light nicks around the rear sight and a patch of black paint just behind the rear barrel band on the left side. The markings are obscured with the exception of the serial number. The hammer and forward screw for the lock-plate are not installed or included. The surviving screwheads are lightly tooled and remain serviceable. Overall, the rifle is in Good condition for an Antique.

Mechanics: The half cock does not engage but otherwise the action functions correctly. We have not fired this carbine. As with all previously owned firearms, a thorough cleaning may be necessary to meet your maintenance standards.

Our Assessment: The Spencer Carbine was created by Christopher Miner Spencer in 1860. Spencer was a Northerner, and when the Civil War broke out a year later he was eager to offer his novel weapon system to the United States military. The Army initially rejected the design for fear that the constant need to provide ammunition for repeating rifles would place an insurmountable burden on its already strained logistics system. While limited numbers were purchased in 1862 and early 1863, the weapon system remained sidelined.

At the massive clash at Gettysburg, where US forces decisively defeated a massive Confederate invasion into the North, Spencer Repeaters played a decisive role. During the battle, General George Armstrong Custer’s 5th Michigan Cavalry Brigade utilized their advanced Spencers to defeat an attack led by General J.E.B. Stuart whose force outnumbered Custer’s by a margin of 3-1. The rapid fire capability of the repeaters proved more than a match for the large Confederate force which was forced to retreat. Despite this stunning success, President Abraham Lincoln was reluctant to invest in the Spencer manufactured repeaters, he had a personal experience with them that led him to believe they were unreliable. To remedy this misconception, Spencer himself secured an audience with President Lincoln to prove the worth of his invention.

On August 18th, 1863, just a month after Custer had proven the effectiveness of his invention, Spencer secured a meeting with the President. The following day the President fired a Spencer (it is unclear what exact model it was), and was impressed with the effectiveness of the arm. Unsurprisingly, the government began to place larger orders for the Spencer Repeaters, with the Carbine variant making up the bulk of the units offered to the US military. The weapon system proved its worth on the battlefield, it was reliable and highly effective. Although Confederate forces did capture some Spencers, the Confederacy lacked the manufacturing capabilities to reverse engineer it and it saw only limited use among Southern forces. Interestingly, John Wilkes Booth had Spencer Carbine with him as he made his final stand after having assassinated President Lincoln. Following the end of the conflict, Spencer Repeating Rifle Co. went under for it had become over reliant on government contracts.  John M. Spencer passed away in 1922 at the age of 89 having left a massive impact on the world.

This Spencer Carbine is serial number 40332 and was manufactured between 1863-1865, it is chambered for .56-56 Spencer rimfire cartridges. It appears to be in its original configuration, although there is a missing screw for the hammer and at the front of the lock-plate. There are no visible cartouches on the stocks, it is unclear if they wore off or this was a privately acquired specimen. This gun remains a relatively well preserved Civil War weapon system. This is one Civil War-era collectible you do not want to miss out on!