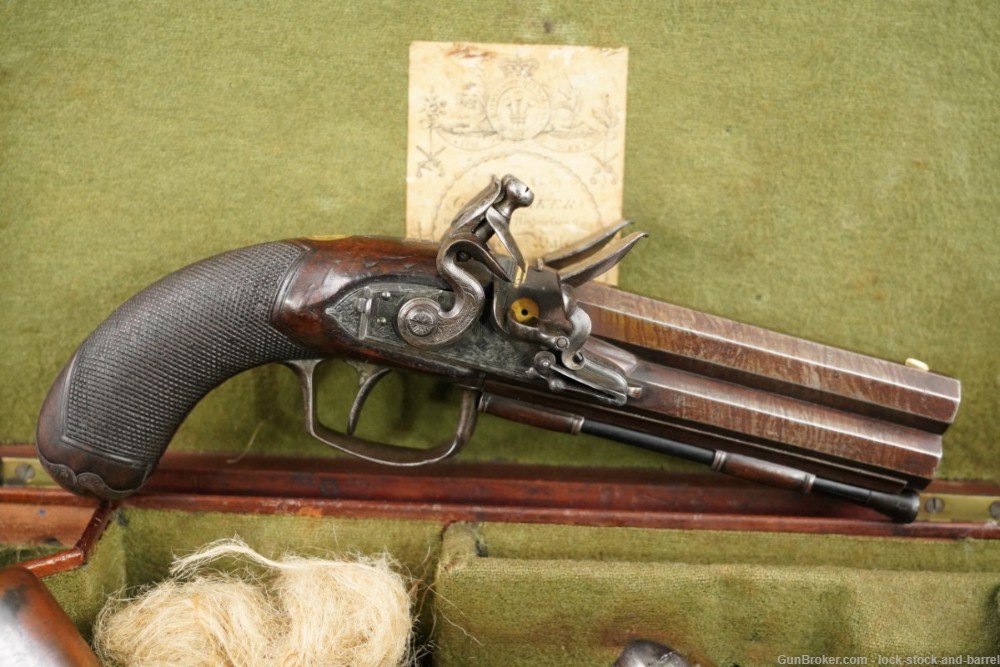 Caliber: Both guns are .48 Caliber

Markings: The guns have identical markings. Aside from the barrels, the metal parts feature decorative scroll engravings. The two lock-plates are each marked with the maker’s name “D. Egg” in cursive. The top of the breech has two gold-colored lines and the top of the barrel assembly is marked “D. EGG, LONDON”. There is a medallion at the top of the grip marked “DG”. The upper left barrel is marked with a crown between two scepters.

Sights/ Optics: There is a gold colored blade fixed above the muzzles and a “U”-notch dovetailed above the breeches.

Stock Configuration & Condition/ Grip: The guns have the same grip features although their individual conditions will be described below. The pistols have two-ferrules at the bottom of the barrel assembly that hold their respective ramrods, an action on both sides, a checkered pistol grip and engraved grip cap.

220520LB001: The stock has some light handling marks, nicks and compressions. Notably, there is a very light crack on the left side of the stock between the pan and hammer and some light wear surrounding the top tang. The checkering remains mostly sharp. Overall, the stock is in Fine condition for an Antique.

220520LB002: The stock has some light handling marks, nicks and compressions. Notably, there is light wear surrounding the hammers and a very light superficial crack at the rear of the right lock-plate. The checkering remains mostly sharp. Overall, the stock is in Fine condition for an Antique.

Bore Condition: The bores grey with some light erosion scattered throughout.

Overall Condition: The two gun’s conditions will be described separately below.

220520LB001: The gun retains about 75% of its metal finish. There is still a significant amount of case coloring on the lock-plates. The Damascus barrels retain most of their finish although there is some light surface oxidation and light handling marks on them. Notably, there is light handling wear along the leading edges. The bright parts have some light surface oxidation on them. The markings remain clear. The screwheads are unmarred and serviceable. Overall, the pistol is in Fine plus condition for an Antique.

220520LB002: The gun retains about 65% of its metal finish. The gun’s case coloring on the lock-plates has largely worn off but there is still an appreciable amount visible on each lock. The Damascus barrels retain much of their finish with only some light surface oxidation and superficial handling marks on them. Notably, there is some light wear along the leading edges, a light nick on the right side of the upper barrel and some light surface oxidation on the bright parts. The markings remain clear. The screwheads are unmarred and serviceable. Overall, the pistol is in Fine-plus condition for an Antique.

Mechanics: The action functions correctly on both pistols. We have not fired either gun. As with all used firearms, a thorough cleaning may be necessary to meet your maintenance requirements.

Box Paperwork and Accessories: The guns come with their original presentation case with a brass carrying handle and green lining. The inside of the case is decorated with a paper indicating the gun’s manufacturer’s, Durs Egg, relationship with George IV. Also included is a bullet mold marked “48”, a total of four flints, four balls, a James Dixon of Sheffield oiler, a powder flask and cleaning rod. The case has some light-moderate handling marks, including oxidation on the brass parts, consistent with an antique item but it remains in Very Good condition. Please note, the ramrods do not appear to be original.

Our Assessment: Durs Egg was a Swiss born gunsmith who eventually set up a business in London. His unparalleled craftsmanship and impeccable eye for detail made his guns among the most luxurious on the British market. He eventually earned the title of gun maker to King George IV (reigned from 1820-1830), a high honor at the time. He eventually passed away in 1831, but his business remained in operation until 1865. His nephew Joseph Egg was also an accomplished gunsmith, he is believed to have invented the copper percussion cap.

This particular set was manufactured during the reign of King George IV and the case has a paper indicating that Egg was the gun maker to the king. The pistols are beautifully crafted and remarkably well preserved for they have only light handling wear. The ramrods do not appear to be original to the guns, but otherwise they are in their original configuration. These pistols are a perfect example of the splendid craftsmanship that Durs Egg was known for. This is a great set for historical firearms collectors and British history aficionados. Good luck on your bid!