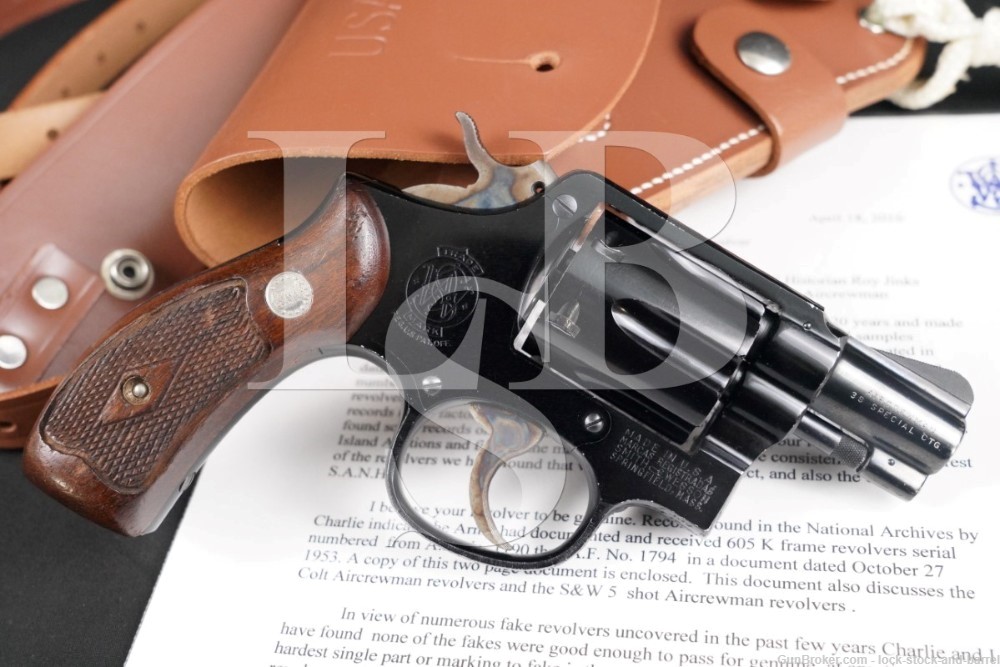 Stock Configuration & Condition: The grips are checkered walnut magna stocks with Air Force medallions and smooth diamonds around the grip screws. There is a small split in the grain on the inside of the right panel. There are some scattered light handling marks. There are some scattered light compressions plus a few little nicks through the finish which have colored with age. There is wear on the edges that border the checkering. There are chip loss repairs on both panels at the corners where the fronstrap widens into the frame. The checkering is mostly strong but there are a few scuffs and minor compressions. The grips rate in about Very Good overall condition.

Overall Condition: This handgun retains about 97% of its metal finish. There are some little marks and spots of finish wear on some of the edges, some of the most noticeable is at the muzzle. There is a light turn line on the cylinder which has not gone through the finish. The screw heads are sharp to lightly used, the most worn screw is the grip screw. The markings are clear. Overall, this handgun rates in about Fine-Excellent condition.

Box, Paperwork & Accessories: Included is a shoulder holster rig and a letter from the Smith & Wesson collectors association written to Mr. Williams by Richard Nahas (Co-Author of Standard Catalog of Smith & Wesson).

Our Assessment: When the Korean War started in 1950, the US Air Force put out a call for lightweight, compact personal defense weapons they could issue to aircrews. Colt and Smith & Wesson, two of the largest and oldest revolver manufacturers, both submitted prototypes that used aluminum alloys in their designs. Fun Fact: While a common material today, aluminum was almost exclusively used in prototypes and one-off firearms prior to the 1950s. Oliver Winchester built a prototype shotgun with aluminum receiver plates as early as 1865, but the cost to purify and process aluminum was prohibitive back then. The Air Force would adopt Smith & Wesson’s design and ordered over 40,000 of these lightweight six shooters in .38 Special. These would arm aircrewmen as well as agents in the Office of Special Investigations. Unfortunately, the aluminum alloy that was so cutting edge and lightweight that it helped Smith & Wesson win the Air Force contract was this product’s ultimate undoing. By 1959, many of the aluminum cylinders and frames of these revolvers showed significant breaks, cracks, and weaknesses, some units having ruptured altogether. The Smith & Wesson M13 Aircrewmen revolver, which requires the low-pressure M41 Special Ball ammunition as they couldn’t withstand commercial ammo loaded with lead bullets, was scraped (literally, in most cases). But these guns were the beginning of a revolution in gun materials, and this revolver and its accessories showcase that history perfectly. This one comes from the collection of author Kevin Williams, best known for his work on the topic of General Officers Pistols & Clandestine Organization Pistols of WWII. There were several variations of the model, it is rare to get one, but to have a chance at different variations is a treat. This is the model marked “PROPERTY OF U.S. AIR FORCE” on the backstrap, “AIRCREWMAN” on the barrel, and without markings on the topstrap. The revolver comes with a letter from Richard Nahas which details various reasons he believes the revolver is the real deal, and he is a collector who has studied the Aircrewman for over 20 years, has a database of Aircrewman serial numbers, and has so much knowledge on Smith & Wessons that he and Jim Supica are the authors of the Standard Catalog of Smith & Wesson so his endorsement carries weight. Whether you’re a general firearms collector, military historian, or specifically a Smith & Wesson fan, this revolver would improve any collection it joined. Please see our photos and good luck!