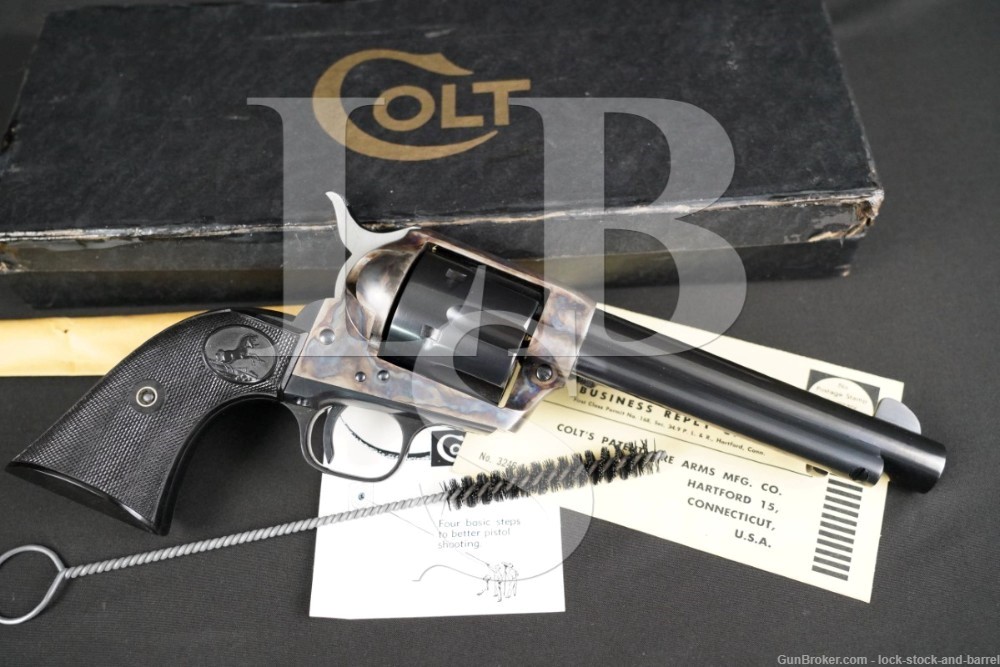 Sights / Optics: The front sight is a blade fixed to the front of the barrel. The rear sight is a square notch at the rear of a groove in the top strap.

Stock Configuration & Condition: The grips are two-piece checkered black hard rubber with rampant colt in oval at the top of each panel. The grips have faint handling wear with only a few scattered minor marks. The checkering is well defined with good detail in the colts. There are no chips or cracks. Overall, the grips are in Excellent condition.

Bore Condition: The bore is mostly bright with sharp rifling. There is light erosion at the muzzle-end.

Overall Condition: This revolver retains about 97% of its metal finish. The finish is generally strong throughout with a little bit of muting in the left of the recoil shield. There are a few scattered faint marks, but no notable wear or damage. The screw heads are sharp. The markings are clear. Overall, this revolver is in Fine-Excellent condition.

Mechanics: The action functions correctly. Lockup produces very little play on all six chambers. The trigger is crisp. The cylinder has a removable bushing. We did not fire this revolver. As with all used firearms, a thorough cleaning may be necessary to meet your maintenance standards.

Box, Paperwork & Accessories: This revolver comes with a one-piece black cardboard hinge-lid Colt box with the serial number hand-written on the bottom of the box.

Our Assessment: Colt’s Single Action Army is, perhaps more than any other, an iconic American pistol. It was the U.S. issue sidearm for the last two decades of the 19th century, used by pioneers, outlaws and lawmen across the expanding nation, and captivated audiences on the silver screen and television (and still does, today). Produced for nearly a century and a half, they are still being made, today! The 1st Generation Single Action Army was produced from 1873 to 1941, though sales did fall off toward the end of the 1st Generation. While more than 344,000 of the revolvers were made from 1873 to 1922, in the last 18 years of production there were only about 13,000 made. This is one of the very last of the 1st Generation, made in 1940 and with a serial number in the last 1,000 made before the United States entered WWII.